Don Fotheringham
How the 'COS' cheated Utah

June 13, 2019
During the 2019 session of the Utah State Legislature, a powerful lobby known as the "Convention of States Action" (COS) succeeded in getting the Republican leadership to maneuver SJR-9 through the Utah Legislature. SJR-9 is COS's application for Congress to call a convention under Article V of the U.S. Constitution. 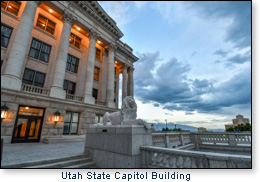 COS claims they want an Article V convention so we can get amendments to the Constitution which "limit the power and jurisdiction of the federal government."

But anyone who has actually read our Constitution knows it already limits the federal government to a very few clearly defined powers.[1] Our problems arise from the fact that most everyone ignores the existing constitutional limits on federal power.

An Article V convention would be dangerous

So what is the real problem with calling for an Article V convention?

Opponents of an Article V convention warn that if Congress calls a convention, the Delegates, as proxies of the People, would have the inherent power to make unlimited changes in the Constitution – even to establish a new form of government. But the COS lobby assures state legislators that nothing can go wrong because Article V amendments require the approval of three-fourths of the states. They overlook (or cover up) the fact that a new Constitution would have a new mode of ratification, even as the 1787 Convention adopted a new mode, making it easier to ratify the new Constitution.

Our only precedent for a convention came in 1787, when James Madison invoked the Delegates' "transcendent and precious" right to alter or abolish their form of government as the basis for what he and the other delegates did at the Convention. They ignored their instructions to do nothing more than propose amendments to the Articles of Confederation, and drafted a new Constitution, which created a new form of government.

We thank God for the extraordinary character of Washington, Madison, Hamilton, Franklin, and others at the 1787 Convention who used their government-making authority to put the happiness of the people ahead of power and despotism. Can you imagine today's Congress calling an Article V convention run by Nancy Pelosi, Joe Biden, Elizabeth Warren, Jeff Flake, and Maxine Waters?

The COS lobby works hard to instill a false notion of legislative superiority over the Delegates to a convention. They assure state legislators that they can limit an Article V convention to a single subject, and that they can restrict the convention to specific rules and regulations. Lawmakers who fall for these promises have no concept of their role in the governing process. Legislators are the product of a convention, not its creators. They do not have the power to create or modify the Constitution under which they hold their existence. Legislators have only the power to make statutes – and constitutions are not made by statute. Under Article V, they have only the opportunity to initiate the convention process – nothing more; and Congress has the duty to call it – nothing more.

COS operatives do not want legislators to understand this doctrine, which was clearly understood by our Founding Fathers. It is described in the 1787 Convention record: "It was of great moment he (George Mason) observed that this doctrine should be cherished as the basis of free government."[2]

The lobbyists who push the states for an Article V convention will not show up for an open debate.[3] Their only hope for capturing the 34 states needed to trigger a convention is uncontested deception. In the state hearings, they resort to stratagems and legislative shenanigans to prevent opposing voices from being heard.

To help get their Utah bill passed, the COS put Rep. Ken Ivory on their payroll [4] and made Rep. Merrill F. Nelson a celebrity by sending both of them to a "simulated convention" staged by the COS in Williamsburg, Virginia. This mock convention was supposed to "prove" that Article V conventions are safe and controllable.

Utah voters have come to realize that the problem is a disobedient Congress and not a defective Constitution. So during the 2018 legislative session, Rep. Nelson kept his application for an Article V convention secret under a strange category called "Protected Bills." This made it impossible for anyone to read or assess the measure before it was put into the system. Apparently, Nelson's opportune moment never came during the 2018 session and his "protected bill" was kept from public view all that year.

But during the 2019 session, Nelson's bill popped up in the Senate under Sen. Evan Vickers' name and was introduced as SJR-9. Well, that was fine and dandy because the application could now be sent to a committee chaired by Sen. Daniel Thatcher, a passionate advocate of blaming the Constitution for the usurpations of Congress. On February 11, during the Senate's "public hearing" on SJR-9, Thatcher allowed four opponents of the bill to speak for no more than two minutes each, while he and Vickers had unlimited time to recite the standard COS line. The Chair prohibited any rebuttal by the opposition.

After witnessing the disgraceful tactics of the Senate committee, I was afraid the hearing in the House would follow the same pattern. So I asked my own Rep. Walt Brooks to see if the House committee Chair, Stephen Handy, would allow me to testify as a special witness on SJR-9. The answer was a flat NO. Handy said he had time for only several two-minute statements. Brooks spent a good deal of time trying to get Handy to allow me a fair testimony at the hearing. Finally, Handy agreed to grant me a small amount of extra time. On that promise, on March 4, I made the five-hour trip to Salt Lake and guess what? Handy cut me off in exactly two minutes! He – or whoever rules him – had no intention of holding a fair hearing. But true to the pattern, Vickers and Nelson had unlimited time to recite the baseless clichés prepared for them by the COS. We needlessly lost in the House committee by a vote of 6-5.

The dirty tricks had just begun

The sad part of this affair is the ease with which we could have beaten the COS in a fair pro/con exchange just as we had done the previous year in 24 states! The pressure was on and Utah was the patsy. But the foregoing was not the end of the subterfuge and deception engineered by the COS. The dirty tricks and the astonishing collaboration of the House leadership had just begun.

The most reprehensible part of the big show came on March 5 on the House Floor. After Nelson's impassioned introduction of SJR-9, six COS proponents (Reps. Stratton, Strong, Acton, Winder, Ivory, and Snow) quickly arose to speak in favor of the resolution. These were hardly spontaneous arguments, for each representative spoke on a different aspect of the issue without any repetition. Then, before any opposing member could arise, Rep. Duckworth arose and "called the question" to end the debate. The Speaker, Brad Wilson, immediately declared Duckworth's motion "non-debatable" and called for a voice vote to end the debate, and the ayes had it! That was the end of the most corrupt Floor session in Utah's history. It was rigged to silence all voices against SJR-9!!

The House then took a vote on SJR-9 and passed it before any of the opposing members (at least 23) could say anything to educate their colleagues or address Nelson's shallow reasons for messing with the Constitution. 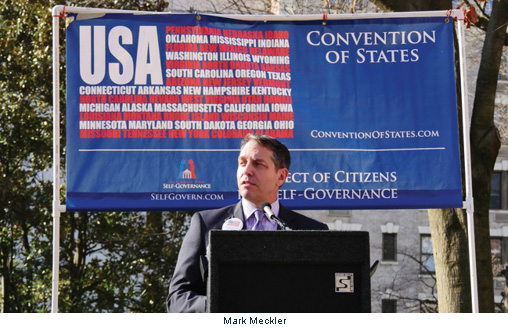 Utah, once the genteel emblem of integrity, is now famous for its parliamentary sins. A few days later, Mark Meckler, head of the COS, was a guest on the Mark Levin Show and bragged about how he got Utah to suspend the rules and call a special vote on his bill. Amazing! I was confused when listening to the audio of the Floor session because I did not understand the silence of our legislators who had vowed to oppose SJR-9. Until Meckler's confession, I had no idea the whole thing – from the fake committee "hearings" to the "non-debatable" Floor show – had been designed from the outset to cut off all voices speaking out against the scheme to call a modern convention.

How COS won the connivance of Utah's leadership and the committee chairmen, I do not profess to know; however, I think such a conspiracy could be carried out by as few as 20 of the 104 members of the Utah House and Senate. That means we yet have a body of strong, faithful representatives who, when fully informed, will rise up to protect our Constitution and honor their oath to support and defend it.


[1]  In Federalist No. 45 (third paragraph from end) James Madison, Father of our Constitution, writes:


"The powers delegated by the proposed Constitution to the federal government are few and defined. Those which are to remain in the State governments are numerous and indefinite. The former will be exercised principally on external objects, as war, peace, negotiation, and foreign commerce ...the powers reserved to the several States will extend to all objects which ... concern the lives, liberties, and properties of the people, and their internal order ... and prosperity of the State."

[2]  The Records of the Federal Convention of 1787, Max Farrand, Vol. II, p.88 (July 23, 1787).
[3]  Two years ago, a volunteer supporter of the COS tried to organize a formal debate on the convention issue and asked Rep. Walt Brooks to reserve the auditorium at Utah's Dixie State University so the public could attend and become better informed. He invited Mark Meckler to debate a competent opponent, Publius Huldah, who is a retired trial lawyer, well known for her skilled opposition to the proposed convention. Meckler refused the invitation, so the COS volunteer decided to debate Huldah himself. Meckler instantly forbade any COS volunteer to debate the issue anywhere or with anyone! Meckler can win only by cutting off all informed opposition. He does this by smearing his opponents and pre-setting the dials at legislative hearings. Most people have never heard the powerful reasons why America has avoided – for 230 years!! – an Article V convention. That has not been an oversight.
[4]  Utah House of Representatives Conflict of Interest & Financial Disclosure (dated January 23, 2017) shows that Rep. Ken Ivory has two employers: Citizens for Self Governance and Convention of States Action (both groups are directed by lobbyist Mark Meckler, who never seems to run out of money).
© Don Fotheringham

Don Fotheringham is a Marine Corps veteran of World War II, a former teacher at Snow College, and a member of The Academy of Political Science. In 1986 he joined Citizens to Protect the Constitution and since then has testified at numerous legislative hearings to stop state applications for a constitutional convention. In 1995 Don organized the opposition to Utah Gov. Leavitt's "Conference of States," an attempt to get a convention under a different name. He writes for the Freedom First website, and is author of The President Makers, available at amazon.com.