August 29, 2013
"We were bored." This was the explanation given by the three boys who murdered Australian baseball player Christopher Lane in cold blood. If those three words do not speak volumes to us about our culture I don't know what will.

Though I have yet to hear the most important questions regarding this case asked or answered, it is to our society's detriment if they are not. They are questions most progressives will avoid and some conservatives may consider addressing once they finish quarreling with them about gun laws. We have a responsibility as human persons to help others in need and the youth of America, particularly black youth, are most certainly in need. Those three words symbolize their cry for help. While it is regrettably too late for Lane, it is not too late to prevent future victims.

How could three young boys find murdering a human being entertaining? To me this is the most glaring question in demand of an answer. In other words what happened to their hearts? While gang initiation may have prompted the killing, motive does not render this question irrelevant. And the answer most likely has something to do with lack of parental involvement. This educated guess appears to be accurate given that the mother of the 15-year-old boy, James Edwards, who allegedly pulled the trigger, is currently incarcerated in the Oklahoma Department of Corrections. She has a rap sheet that begins roughly four years before the birth of her son and spans throughout his lifetime.

We've heard the staggering statistics of out of wedlock births (72% among African Americans, 52% among Hispanics, and 28% among whites). Within those statistics we know there are virtually absent father figures. In Edwards' case it was his mother. It is safe to assume that the boy grew up unsupervised, a strong clue that provides the answer to another essential question: Why were they bored? Any sensible, caring parent knows that boys need supervision, structure, and physical activity or they will get into trouble. The necessary component to prevent this, however, is a sensible, caring parent.

And this is not the only case of bored teenagers killing for entertainment. Back in December 2010 six teens beat a New London, Connecticut man, Matthew Chew, to death for "no reason" other than "because they were bored," cited Judge Kevin McMahon. Exactly one year ago in August 2012 six more teens were arrested for beating an Ohio man, Pat Mahoney, unconscious "because they were bored and looking for something to do," reported the Daily News. Mr. Mahoney died from internal injuries less than a year later.

Since family disintegration seems to be on a worsening trend, there are no visible signs that these problems will soon depart from us. After the Trevon Martin case Bill O'Reilly suggested solutions to these problems, which were "to actively discourage pregnancies out of marriage, to impose strict discipline in the public schools, including mandatory uniforms, create a zero-tolerance policy for gun and drug crimes imposing harsh mandatory prison times on the offenders, and finally challenge the entertainment industry to stop peddling garbage."

While I agree with most of these ideas they are not solutions, they are broad proposals and neglect to address the root of the problem. The solution must be specific and proactive, one that will seize that crucially defining moment in a child's life when he or she will choose to resent or forgive, to fear or to have faith, to hate or to love. For deep in the core of these troubled teens lies a void, an aching internal wound that formed upon the departure of their mother or father and intensified during their absence. Though we tend to blame guns, a poor education, or lack of jobs, this void resulted from feeling unloved, and thus will only permit love to heal it.

Natural human tendency strives to avoid sadness and to protect the heart by constructing walls. It hurts too much to acknowledge an unloving parent. The pain is too great for a young person to bear, therefore they choose to be angry and feel justified doing so. Anger is easier; sadness is debilitating and all-encompassing. Yet they need to acknowledge the hurt they feel or it will consume them on the inside. An old Sufi adage tells us, "If a man removes his bitterness, he becomes human; otherwise he becomes an animal." I don't think anyone could argue with the fact that we currently have a lot of armed animals roaming around out there.

While this reality is daunting it doesn't mean we should pretend it doesn't exist. It will never disappear nor will it stop haunting us if it is not addressed. We will continue to hear about senseless and tragic murders across the country if we refuse to deal with and attend to the void that presently permeates the heart and soul of America's youth. Though we dutifully clothe, feed, and house bodies we neglect the gaping wound in their hearts.

Although this is no excuse for anyone's poor personal choices or behavior, it is still a stark reality in desperate need of resolution. Aren't liberals supposed to be all about helping people? Why does it end with government regulations and food stamps? Simply disarming someone or handing someone a sandwich will not cure the ills that presently pervade our society. The problem with these solutions is that they are temporary and corporeal. They only address the symptom as opposed to the ailment itself. They do not factor in the human spirit – that there is a life standing before them looking for meaning in this world. A real human being who is in desperate need of love and a purpose.

For those of us who are fortunate enough to have had two involved parents, or at least one, and to have felt cared for and loved, try to imagine what it must be like to feel unloved. Who can provide this love to these countless, neglected children?

If our culture deems it charitable to provide corporal necessities to those who lack them, such as food, clothing, and shelter, would it not be charitable to provide for their spiritual needs as well? Does a body not have feelings and emotions as well as arms, legs, and a stomach? What happened to the progressive's "it takes a village" attitude?

More than fifty years ago Abraham Maslow introduced his Hierarchy of Needs Pyramid to illustrate the basic elements that are necessary to successfully educate a child. He explained that certain human needs must be met in order for a person to grow and progress. The top of the pyramid, or goal to achieve, is self-actualization. However, this goal cannot be reached without achieving the basic physiological needs on the lower portion of the pyramid. 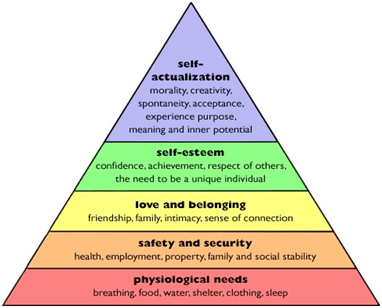 Upon studying impoverished cultures, however, it became clear that people are still capable of demonstrating and achieving love and belongingness despite their severe lack in physiological needs. This drew criticism toward the Hierarchy of Needs Pyramid and somewhat falsified Maslow's assumptions that lower needs must be met before a person can progress to self-actualization. Yet what this study more importantly affirms is that a person's need for love and belonging actually comes before their physiological needs. Perhaps love and belonging should be repositioned at the bottom, the very foundation of the pyramid.

The years during middle school are years of transformation when a young person is leaving childhood and preparing to enter adulthood. It can be an overwhelming time especially without structure or guidance from parents. Over the past 25 years childhood anxiety and depression have been steadily on the rise. These children need more than academic support in school, they need spiritual support. They need to know there is a God who loves them unconditionally, and in spite of their parents' negligence, they can receive His love if they open their hearts to it.

Why not give them tools to help them handle the adversities of life before they become addicts or murderers? A non-denominational elective in spirituality can be offered to those who need it during these years, to those who suffer from neglect, anxiety, depression, or are experiencing a personal crisis, such as divorce. Perhaps a program similar to the Twelve Steps can be used as a guide, except instead of admitting to an addiction a child can be forthcoming with their feelings and share them with others in a safe environment. Since the world is failing them, they can find hope in the One who will never leave them nor forsake them.

There I said it.

"What about separation of church and state," you say?

Separation of church and state was created to keep the church out of state affairs and vice versa, not to keep God away from man. Fifty years ago we allowed a minority of unbelievers to push God out of our schools. The following prayer, recited voluntarily at the start of each day in a school district in Herricks, New York, offended a group of families:


"Almighty God, we acknowledge our dependence upon Thee, and we beg Thy blessings upon us, our parents, our teachers and our Country."


The case (Engel vs. Vitale) went to the Supreme Court questioning whether the "reading of a nondenominational prayer violated the 'establishment of religion' clause of the First Amendment. "

They concluded that it did, citing "Neither the prayer's nondenominational character nor its voluntary character saves it from unconstitutionality. By providing the prayer, New York officially approved religion."

And we have been reaping the dire consequences of this injudicious ruling ever since. I'd like to know exactly which "religion" New York officially approved at the time. What our Founding Fathers had approved of in this country is faith, as did the school district in Herricks, New York. Neither endorsed a specific religion. If our Founders were able to draft a constitution that respected religious diversity we should be able to compose a class in spirituality that incorporates all faiths. If Atheists don't like it, they don't have to elect the class, which is what the religious majority is told when they disapprove of a television show.

Recorded in the facts of the case it says, "This was the first in a series of cases in which the Court used the establishment clause to eliminate religious activities of all sorts, which had traditionally been a part of public ceremonies. Despite the passage of time, the decision is still unpopular with a majority of Americans."

What are we, the "majority of Americans" going to do about it? It's time to reverse the damage we have done. We have reached a decisive time in our nation's history that requires a choice: Are we or are we not a nation of believers? Our children and our grandchildren need an answer.

Let us learn a lesson from these senseless killings and not allow the victims to die in vain.

"Can a mother forget the baby at her breast and have no compassion on the child she has borne? Though she may forget, I will not forget you! See, I have engraved you on the palms of my hands" Isaiah 49:15-16.