July 26, 2013
The following is a translation of an article from Chinese military periodical Junshi, July 3, 2013.

Instantly destroy the entire United States! China's latest killer mace weapon exposed. Recently, the British "Jane's Defense Weekly" cited an anonymous American source saying that the missile fired by the Chinese second artillery corps on July 24 is the most advanced Chinese missile thus far, the Dongfeng-41 [2] intercontinental ballistic missile. "This is the first time that an American official has confirmed the existence of this missile project." Of particular concern to the West is that the Dongfeng-41 could be put to use. 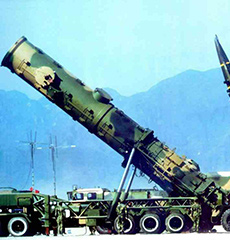 Recently, the British "Jane's Defense Weekly" reported a quote from an anonymous US official, who said that the chief concern of the West is the potential for the Dongfeng-41 to use multiple independently targetable reentry vehicle (MIRV) technology. This technology makes it possible not only to load multiple warheads onto a single missile but also to control individual flight trajectories for each individual warhead, controlling the orbit to attack different targets. In this way, each antimissile intercept missile can destroy only one warhead, rendering the antimissile system much less effective. An Asian military expert told the Jane's Weekly reporter that the Dongfeng-41 can carry up to 10 guided nuclear warheads, seriously compromising the reliability of the American antimissile system.

Photos of the Dongfeng-41 circulating on the Internet

Actually, the Chinese People's Liberation Army's most powerful deterrent to the American military is still the intercontinental ballistic missile. If the Dongfeng-41 really completes its test launches, this will have three major implications: firstly, technically speaking, multiple warheads can largely ensure continuity of strike capability and breakthrough, and in particular, will greatly shift the balance against America's established antimissile system. Secondly, it will provide a powerful deterrent against the US military buildup in the Asia-Pacific region which is provoking a situation around China. Thirdly, the Dongfeng-41 features third generation ICBM characteristics, and has a formidable first wave strike capability. The West speculates that this may imply a change in China's "no first use of nuclear arms" commitment. In fact, this sort of ambiguous strategic thinking may be the biggest deterrent to hostile countries.

In terms of technology, the third generation ICBM can possibly control all strategic target threats on earth, enhancing global strike capability, but China's "no first use of nuclear weapons" commitment has not changed. China's ballistic missile development actually has no particular objective other than safeguarding China against any hostile forces that may provoke it. The "substantial nuclear arms reduction" announced between the United States and Russia is merely concept hype. This is because the "substantial reduction" is only a change in the state of the nuclear weapons and not their complete destruction. The USA and Russia have not yet destroyed nuclear warheads but have only gone from a state of high alert to a state of low alert. He [3] believes China is facing increasing nuclear threats and needs to perform limited development of third generation nuclear missiles if it wants to respond more efficiently to security challenges.

From the standpoint of both the trend in global political patterns and the surrounding strategic environment, the situation facing China is becoming increasingly complex and diverse. The South China Sea dispute, the Diaoyu Islands dispute, and the Taiwan problem are becoming very serious because of US involvement. From the looks of things, the South Sea problem and the Diaoyu Islands dispute could lead to an exchange of gunfire. The US is hemming in Chinese interests, and action will increase in the future. Further, China's strategic missile development has a deterrent effect on the US in terms of politics. In military terms, it is a very strong deterrent and this kind of strategic deterrent power is a strategic trump card which can effectively counter the U.S. in the political and military arena in terms of China containment and suppression.

The South China Sea dispute is a labyrinthine maritime boundary dispute between the PRC on the one hand and the Philippines, Taiwan, Vietnam, Malaysia, Brunei and Indonesia on the other.

The Diaoyu Islands dispute is between mostly the PRC and Japan (which calls the islands Senkaku). However, Taiwan also claims the islands, which it calls Tiaoyutai. The U.S. had included these islands as Japanese possessions in the Treaty of Mutual Cooperation and Security between the U.S. and Japan.

As I was reading this article, describing the Dongfeng ICBM which the Chinese have aimed at the U.S., her number one trading partner, I had Henry Kissinger and his enthusiastic advocacy of China trade and most favored nation status for China in the back of my mind. Without Kissinger and his pioneering work, visits to Red China, etc, and his influence on Richard Nixon's thinking, we may not be looking down the barrel of the Dongfung 41 today, because the Chinese could never have afforded it without our money. The actual granting of most favored nation status was passed in Congress under Carter following tireless efforts of Kissinger and Nixon to deceive gullible politicians and citizens into believing they were opening up a buyers' market for US goods. Nor do I ignore Clinton's role in sharing secrets with the PRC. Dongfeng 41 was the accomplishment of many useful idiots working diligently in high places.

Here is a brief article on Kissinger showing his fanatical dedication to the New World Order:

If you like being the target of the world's most menacing ICBM equipped with MIRV technology that is said to neutralize US ABM defenses and, according to the boastful words of the Junshi article, "can instantly destroy the whole USA," then you owe your sense of awe to none other than Henry Kissinger, the most effective enabler the PRC ever had.


[1]  The Chinese expression translated as "killer mace" is roughly equivalent to "trump card weapon."
[2]  Dongfeng means literally East Wind – Tr.
[3]  It is not clear to whom "he" refers here. Logically, it could refer either to the Jane's Defense Weekly reporter or to the US official quoted by this periodical. – Tr.
© Donald Hank

Until July of 2009, Don Hank was operating a technical translation agency out of his home in Wrightsville, PA. He is now retired and residing in Panama with his wife and daughter.

A former language teacher, he holds an undergraduate degree in French and German from Millersville State University (PA), a Master's degree in Russian language and literature from Kutztown State College (also in PA), has studied Chinese for 3 years in Taiwan at the Mandarin Training Center, and is self-taught in other languages, having logged a total of 8 years abroad in total immersion situations.

He is also the founder of Lancaster-York Non-Custodial Parents, a volunteer organization that provides Christian counseling for non-custodial parents.

February 11, 2016
Security conscious Americans entrust the most vital security task of all to amateurs

January 26, 2016
Hammond standoff in Oregon: Feds MAY NOT own that land

December 15, 2015
The only solution to Washington tyranny: Restore state sovereignty