December 28, 2014
This time of year brings back memories of Christmases past – like the time I interviewed Virginia O'Hanlon, who as an eight-year-old triggered one of the most famous editorials in history.

Her friends had told her there was no Santa Claus, so she wrote a letter to the NY Sun: "Dear Editor: Some of my friends say there is no Santa Claus. Papa says, 'If you see it in The Sun, it's so.' Please tell me the truth, is there a Santa Claus?" 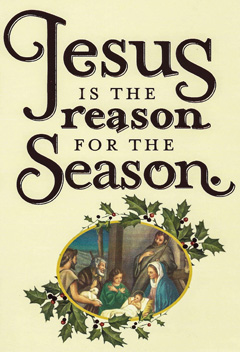 A few days later, an editorial appeared, giving her this reassuring answer: "Yes, Virginia, there is a Santa Claus. He exists as certainly as love and generosity and devotion exist, and you know that they abound and give to your life its highest beauty and joy. Alas! How dreary would be the world if there were no Santa Claus! It would be as dreary as if there are no Virginias. There would be no childlike faith then, no poetry, no romance to make tolerable this existence. We should have no enjoyment, except in sense and sight. The eternal light with which childhood fills the world would be extinguished."

I interviewed Virginia in 1956 when she was ready to retire after a long career as a teacher. She had already given back far more to future generations of children than the editorial writer ever dreamed. That's what Christmas is all about, a time to invest in the dreams of children so that they can keep love and generosity alive for still another generation.

The Santa idea, of course, was based on St. Nicholas, a 4th Century Christian bishop in a place called Myra, where a woman needed a dowry if she were to have any hope of marriage. One poor man had three daughters who were destined for spinsterhood or worse. Mysteriously, bags of gold were tossed in their windows at night, so that each in turn could be married. This was the origin of the custom of children leaving their stockings out at night for St. Nicholas to fill.

It's also a reflection of the central idea in Christianity, the mysterium of St. John Chrysostom, the idea that someone higher up – a king, a prince, or bishop – would reach down to those who are poor and lift them up. It is also the meaning of the Incarnation – God coming down to embrace our humanity in order to lift us up so that we might share in His divine life.

There is no way that a perfect, changeless, distant God could do this except by sending His Son to take on our humanity as a helpless infant at Bethlehem, and then redeeming us through His life, death and resurrection.

Interestingly, on the cross, only His humanity could suffer. That's why the cross remains His ultimate embrace of our humanity and an example of how we should bear the inevitable pain and suffering involved in the human condition – as well as the ultimate joy of sharing in His triumphant resurrection.

This is the deepest meaning of Christmas, but not one we often reflect upon in the rush and noise of the Christmas season. How many Catholics, for example, understand that this central mystery of Christianity is celebrated at every Mass?

All we bring to it is our fragile humanity, broken in 1,000 places by our human weakness. That's what we put on the altar in our gifts – the bread and wine, the work of human hands, our need for forgiveness and healing for the failings we experience every day. And then Christ returns again in this mystery of mysteries to raise us up.

What a powerful idea that is. And yet the pews in many of our churches are often less than half full on an average Sunday. Parishes all over the country are being closed or merged. Great numbers of our young people have drifted from the faith of their fathers. Celebration – or even the mention – of the religious aspect of the season is banned in many public places.

And then there is the widespread apathy and indifference to the taking of innocent human life, to the 58 million babies who have been aborted in the United States since 1967. That's fully 30% of the entire generation under 47 – Gen X, Gen Y and Gen Z. And yet the biggest, most violent protests develop over the unavoidable killing of a single hoodlum resisting arrest.

Yet, paradoxically, there is still hope as long as people remain open to the healing forgiveness of Christ that leads to conversion. Women who have had abortions, men who have paid for them, even doctors who have performed thousands of them have all found the miracle of God's grace in heartfelt repentance and honest, humble seeking of Christ's forgiveness.

I have seen that same thing thousands of times in my 44 years in Alcoholics Anonymous. Every recovering alcoholic in those sacred rooms is a one-of-a-kind miracle of God's grace.

That's something we urgently need to remember as we go about the business of helping to change hearts and minds in the hope of making America a truly pro-life country again. No one is beyond the reach of God's loving mercy.

That's the spirit we need to bring to America's young people as they enter upon their own personal pursuit of life, liberty and happiness in a badly confused world.

That's the spirit we need to reflect as we reach out to them through seminars, through the internet, podcasts and videos, and social media of every kind.

That's the spirit we need to bring to our churches as we seek to awaken them more fully to the greatest crisis of all time. Our churches are the last places that should succumb to apathy and indifference and the first to reflect Christ's loving embrace of the humanity he came to save.

Finally, that's the spirit that should inspire us to reach out with our prayers and material support to all who engage in this important work of pro-life evangelization.

However, like everything else, this work can't continue without concrete support of time, money and resources by all who share this commitment. We have to be willing to put our money where our convictions are or they will ring hollow and fail.

Yet I know of no pro-life organization that is not currently experiencing some more or less serious loss of financial and other support. The pro-life movement is in a major crisis.

Here at the Movement for a Better America, we are running on faith and fumes. Our volunteers and unpaid staff are reaching into their own pockets to keep the work going for another year. We have seminars to run, videos to make, web pages and social media to fill with meaningful messages addressed to the most important audience of all – today's young adults.

The need is great. Today's younger generation has already suffered the loss or 30% of their numbers to the Fifth Horseman of the Apocalypse – that demon called abortion that currently roams the earth seeking whom it may devour.

Yet that is the generation that we most need to reach and persuade if America itself is not to go down the drain within another generation or two. With births currently declining by 1.8% a year since 2008, that is about all the time we have left to save America.

Without your help, we will have no choice but to give up the fight and go join everyone else in the struggle to make a living. We've done this for 20 years without compensation, but we do have expenses that can't be put off, and still others that are essential to continuing this mission we began with the encouragement of the late John Cardinal O'Connor.

There is no end of work to do, but we are running out of the money needed to do it.

We have radio interviews scheduled for January, teen seminars to organize and run, a book to write and emails to send, plus new venues like my recent appearance on Reddit where I talked for 8 hours and fielded questions from 250 young people. They gave us an 85% favorable rating! That was amazing, and a huge source of encouragement that we are on the right track.

That's why we are appealing to you to join with us in Christ's embrace of suffering humanity – not just the materially poor, but the vast numbers who are suffering from the spiritually empty poverty of alien ideologies that grip our society today.

The world may appear deeply troubled, even beyond hope at times, but it is also a world that is ripe for conversion of the deepest kind. You can help achieve that by sending us your most affordable gift to help us raise up a new generation from among those already deeply wounded by the abortion holocaust. That's our mission. You can be a part of it by donating today.

Or just go to our website, click on the donate button, and make your donation securely through Paypal and your favorite credit card account. Donate Here!

If you share our belief in the deepest meaning of Christmas, we ask you: Please donate today!

P.S. Here are some additional links to show you what Movement for a Better America is currently doing to advance the cause of life in America today.

Who Should Women Listen To?

The Coming Revolt of Gen Why