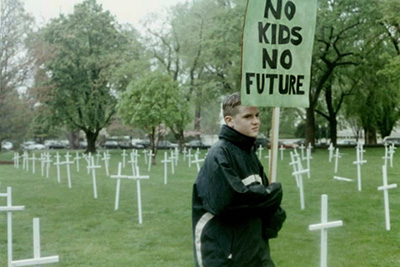 First in a series of articles. © copyright 2015

By next January – the 43rd Anniversary of Roe v. Wade – the abortion toll in America will reach 59 million innocents.

That should be the story of the century. Yet the liberal media makes more noise about a single Ebola case arriving in the United States . . . or a bunch of bears cavorting in a swimming pool in suburban New Jersey . . . than it does about aborting 30% of the entire American younger generation under age 49.

That's 30% of our much heralded Gen X, Y, and Z – and nearly 10 times as many innocents as the number of Jews killed in the Nazi holocaust. Yet, in our politically correct age, hardly anyone dares call it a holocaust.

Well, that's what I'm calling it, and I just celebrated my 65th anniversary as an award-winning Catholic writer.

Because the truth is that it is a holocaust without precedent in human history. Worldwide, abortion has taken some two billion lives since the former Soviet Union launched the abortion holocaust in 1920.

And two billion, by the way, is equal to the entire population of the planet in 1927.

If that isn't a holocaust, I'll eat my shirt along with every award I ever received for writing the God's honest truth.

Our unwillingness to admit this is the most amazing kind of denial I've ever seen in my long career as a journalist and market researcher.

Motivational researchers call it cognitive dissonance – a psychological conflict between reality and what we allow ourselves to think about it.

Experiencing such a contradiction normally leads to a great deal of pain. Like the guy who pays big bucks for a hot new car only to find out too late that it's a clunker.

The easy way to minimize the pain of such an experience is to do what psychologists call "maneuver around your hangup." That is, to find some rationalization that will help you feel good about it instead of acknowledging the contradiction.

Like believing the abortion industry when it tells you, "Oh, it's only a blob of tissue." Or trusting a politician who promises to make abortion "safe, legal and rare." Or the U.S. Supreme Court simply pretending that the unborn child isn't a person. But the biggest lie of all is the one about "choice" when what they are selling offers no choice at all.

The problem with maneuvering around your hangup is that, sooner or later, the piper must still be paid. It changes nothing. It is a denial of reality, period. Instead of facing the problem, we simply pretend that the contradiction isn't there.

. . . are equal to the population of our 93 largest cities. It's exactly the same as if we had a major nuclear war and all the people in those cities perished. Within two more years, the toll will soon include our top 100 cities.

. . . speaking of nuclear war, it is also 513 times more people than perished in the atomic bombing of both Hiroshima and Nagasaki at the end of World War II.

. . . it's 90 times more than all the battle deaths in all the wars we have ever fought, starting with the American Revolution.

. . . it's more than all the people lost in World War II – military and civilian – by all the major powers – including Russia, Germany, Italy, Japan, China, Poland, England, France, Canada and the U.S.

. . . Indeed, the casualty rate for our soldiers in World War II was just 1.8% for battle deaths, and 2.5% if you include those who died of other causes. Yet abortion has taken the lives of fully 30% of Gen X, Y and Z together.

. . . No other generation in history has ever suffered that kind of toll. It is in fact 12 to 16 times more than all the fatalities inflicted on our GI's in World War II.

Yet the people who defend abortion still talk and act as if this doesn't amount to a hill of beans. They even try to turn the tables by accusing those who condemn abortion of conducting a "war on women," in spite of the fact that half of those aborted since 1967 would be young women living productive lives today.

And, mind you, the other half counts, too. If they had lived, they would be young men living productive lives today, some of them married to the girls who were tragically aborted. No matter what anyone says, male lives matter, too.

Yet, these same liberal ideologues lead riots and protests under the banner, "Black lives matter." The truth is: they don't give a fig about black lives either. If they did, they'd be protesting the wholesale slaughter of black babies by the abortion industry.

The fact is that African-Americans make up 13% of our population, but they have had 35% of all abortions, thanks to targeting by Planned Parenthood and the sellout of blacks by liberal politicians of both races.

To date, the black abortion toll is pushing 21 million. That's more than half of the current black population of 40 million.

It is also 4,000 times as many lives as were taken by lynching in the 100 years from the Civil War until the late 1960's. If lynching was evil, this is horrific.

In sheer numbers, it's many times worse than slavery ever was. At the peak of slavery, there were 4 million slaves in the United States. But the vast majority of them lived to have children and grandchildren who are free today.

By contrast, abortion has taken the lives of five times as many blacks as there were slaves in 1860. None of them will ever have a child or a grandchild. And every last one of them were denied Martin Luther King's great cry "to open the doors of opportunity to all of God's children."

Instead, they were aborted before they could take their first breath.

So whether your slogan is "Black Lives Matter" or "All Lives Matter," the gospel according to Planned Parenthood is a contradiction of everything Dr. King stood for.

In fact, abortion is like a cancer that is eating away at the heart and soul of America. Denying the facts about how it is affecting our future is like pretending you don't have cancer. Keep ignoring it and it is going to kill you.

Already, abortion has cost us an estimated $50 trillion dollars in cumulative lost GDP, and that number is mounting by another $3 trillion every year. That's nearly as much as total federal government revenues this year. It's a hidden drag on our economy that is the equivalent of doubling all federal taxes.

Moreover, it will only get worse because the impact of abortion echoes down the centuries. Eliminate 59 million children from this generation, and you automatically eliminate all the children they would have had in the next generation . . . and the generation after that . . . . and the one after that.

No kids, no future. It's as simple as that.

Based on current trends, abortion could last for another 200 years or until we run out of babies to abort. But if it continues, you can be sure of one thing.

America itself won't make it.

That's why the time to stop abortion is now – in this critical election year of 2016. If America doesn't stop killing its children, America itself has no future.

You can help put this issue on the national agenda today!

This is the first in a series of articles on the awesome damage abortion is doing to America and its future. It is written by Dennis Howard, an award-winning Catholic writer whose research has made him a leading expert on the economic impact of abortion. The series is a byproduct of his work on a new book which, God willing, will see print within six months.

Dennis is the writer/researcher who predicted the current economic malaise as early as 1995. He even had the dates right – starting in 2000 and extending to 2020 – all based on his analysis of the economic impact of abortion demographics.

Dennis has been writing since 1950, when he helped launch America's last lay-edited Catholic daily newspaper. He went on to write, edit, or launch some 20 different Catholic magazines and newspapers before moving on to Madison Avenue. There, he served such clients as Waring, Cessna, Toshiba, Matchbox, Westinghouse Intl, Baker Industries and AT&T. Upon retiring, he started Movement for a Better America as a non-profit pro-life communications think tank.

Howard says, "Abortion is destroying the American future far more effectively than our worst foreign enemies. It is absolutely urgent that we get this issue on the national agenda. But we need your help to do that. We are up against formidable, well-funded enemies. Unless we make this issue a top priority, America as we know it will not survive. It's that simple."

"The odds against us are great. The federal government alone gives Planned Parenthood over $500 million a year in subsidies. We could do wonders with a tiny fraction of that. It's just like David going up against Goliath with a slingshot and a stone. Our stone is the God's honest truth about what abortion is doing to all of us, not just to the unborn.
"Don't think this task is impossible. We've done the impossible many times before. Some of my greatest successes were companies that were ready to sell the factory before we launched campaigns that produced results ranging from 500% to over 1000% in just a few short years.

"However, to win this, we must find common ground with other Americans. Many do not share our values, but all of them share our hopes for a better future. The economic impact of abortion frames the question not just in terms of the past, but in relation to the future. Every day abortion continues only increases the burden we are placing on our own and our children's future.

"That's why it is so important for all of us to act now, and act together. It will take a great deal of effort to get this book published within the next six months. That's why I need your help today.

"Within six months, you'll receive your own copy of this blockbuster book – No Kids, No Future. This is the book designed to bring an end to the new Black Death that is threatening the future of America today. Help stop this epidemic now."