December 30, 2015
The Good News is that Jesus came into this world 2000 years ago as a tiny, helpless babe in the little town of Bethlehem. Through the miracle of the Incarnation, He took on our humanity in order to save us from the consequences of human weakness and sin. 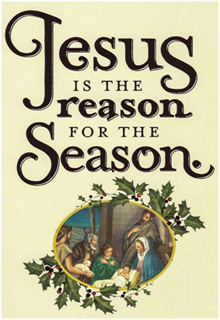 The Bad News, unfortunately, is that humanity today is every bit as much in need of saving as it was on that silent night 2000 years ago when three Kings came from the East and a few shepherds gathered to pay Him homage.

Now as then, there are people so threatened by His innocence that they are willing to destroy literally millions of other innocents across the world in a vain attempt to deny mankind's one, secure hope for eternal happiness.

First it was Herod, so fearful of losing his worldly power that he ordered the slaughter of every infant boy in his kingdom under the age of two. He wanted to make sure that he eliminated this one child who was heralded to be the promised King of the Jews.

Years later, it was Pilate and the High Priests of Israel who felt threatened by the Man who claimed to be head of a new Kingdom not of this world.

To satisfy the political correctness of their day, they had Him crucified. Nevertheless, He triumphed by rising again on the third day and giving birth to a faith and a church that He promised would survive until the end of time.

Survive it has, but not without more pain and suffering down the centuries traceable to that same narcissistic impulse that tested Jesus from His first encounter with Satan in the desert to His suffering and death on the cross.

Satan tempted Jesus by offering Him power over all the kingdoms of the world, saying: "All this I will give you if you bow down and worship me."

Always it is this same temptation to power and might that persuades men to sacrifice all that is good and holy for a short-lived grasp on power over others. Jesus didn't fall for it, but far too many flawed humans do.

In his book "People of the Lie," M. Scott Peck defined this as the essence of evil: "the use of power to destroy the spiritual growth of others for the purpose of defending and preserving the integrity of our own sick selves."

No other century has carried this to the same length as we have over the last 100 years, starting with the Communist revolution, two world wars, followed by murderous population control and abortion movements in the U.S and around the world.

Two world wars took the lives of 67 million people to satisfy the thirst for power of Nazi, Fascist, and Communist dictators across the Eurasian land mass.

But that was small stuff compared to the 2 billion lives taken by the worldwide abortion movement cloaked in the spurious claim of helping women. Abandoned in a veil of tears were the billions of women who, like Rachel, still mourn for their lost children.

So what are the consequences of this, the bloodiest century in history? What is it that the Christ Child would save us from . . . if we just listened?

We have refused to face the fact that those 2 billion we aborted are no longer around to raise a new generation of humans. The impact of that will echo down the centuries from one generation to the next, and will be felt all across the non-Muslim industrial world.

Meanwhile, since 2007, births in the U.S have begun a new downhill slide of 1.7% a year. As a result, within just 15 years, deaths in the U.S. are likely to exceed births for the first time. By 2050, as the last of the Baby Boomers die off, deaths may well be twice the number of births, and America will be in a precipitous population freefall.

Tragically, this is the world we are leaving to our children and grandchildren. By 2050, children born today will be young people trying to make their way in the world. How will they cope with the growing challenge of passing on life to still another generation?

If you think we have a problem with radical Muslim immigration today, just imagine what that will be like in 2030, 2050, or later.

The truth is: if America and the West do not change NOW, the entire world may very well be living under Sharia Law by the latter half of this century.

And it won't be just because of sporadic attacks by small groups of radical Muslim Jihadists. It will be because we, the people of America, Europe, and Latin America embraced the current culture of narcissism and rejected our Christian past.

Just look at our current political scene, which seems at times like a narcissistic riot, fueled by an equally narcissistic media, who see their role not as conveyers of news and truth, but as final arbiters of who is up and who is down, who wins, who loses.

No wonder the biggest loudmouth easily dominates the dialogue in the Republican scrimmage for the nomination. Sane voices are lost in the melee, while some of the wisest have already quit the race. Narcissism pervades our political culture.

The situation is no better on the Democratic side, with one candidate already firmly positioned to become liar-in-chief, while a narcissistic president worries more about his legacy than about the future of the nation. It's a picture designed to engender apathy. And apathy is the death of hope.

So where is hope to be found in this broken century?

The answer takes us back to that stable in Bethlehem, where God sent His only Son to take on our humanity – with all its faults and all its fallen impulses – and to show us the way to sanctity, serenity and sanity. There is no easier, softer way. Somehow, we have to accept our humanity and generously give it back to Him and let Him transform us.

Catholics have the opportunity to do this every time they celebrate Mass, as He commanded them to do. Others can do it in their own private way. But that is the only way this world can be transformed – by one person at a time turning his life and his will over to care of God and following in His footsteps. Conversion of heart is the answer.

I wonder: how many of us understand this? How many of us recognize this as the easier, softer way the Christ Child offers us to a better world?

I finally came to believe that 45 years ago, when shaking like a leaf I entered the rooms of AA and discovered that the price of regaining my sanity was turning my life and my will over to the care of God as I understood Him.

It was that decision that ultimately led to my starting Movement for A Better America.

Since then, by the grace of God, the only way alcohol has passed my lips was when receiving His Body and Blood in the Eucharist. But each time I receive Him is an opportunity to surrender my life and my will all over again.

The resistance we humans exercise in our effort to pursue "My Way" still amazes me. But the answer to our dilemma – and to the challenge of this violent century – still gets back to the same thing. There is no easier, softer way than turning our lives and our will over to the care of God, and letting Him guide us in everything we do.

There is no other way to save this troubled world. We have to get totally honest with ourselves, come to believe that only He can restore this world to sanity, and then take the steps we need to straighten out our corner of this selfish, insane world.


The Joy of Doing God's Will

To give, and not to count the cost,
to fight, and not to heed the wounds,
to toil, and not to seek for rest,
to labor, and not to ask for any reward,
save that of knowing that we do Thy will.


Dennis Howard is a veteran Catholic journalist and creative marketing consultant who has been writing since 1950. During the "golden era" of the Catholic press in the 1950's, he helped launch half a dozen Catholic magazines and newspapers, and edited or contributed to more than a dozen others. Later, during the "Madmen" era on Madison Avenue, he worked as a creative and marketing director for two New York ad agencies and then started his own in 1974. He served such clients as Waring, Matchbox Toys, Toshiba America, Baker Industries, Cessna, and AT&T. In 1990, he tried his hand at standup comedy, producing shows at three clubs in New York and Long Island and working with up-and-coming new comedians like Jim Gaffigan. Retiring in 1995, he felt called to the pro-life movement and founded The Movement for a Better America with the encouragement of the late John Cardinal O'Connor. He is currently working to develop fresh pro-life strategies for the 21st Century based on his research into the economic and demographic impact of abortion, a subject on which he often writes and speaks. He is currently writing a book on the tragic consequences of abortion for the future of America & the West.