Warner Todd Huston
Constitution, Schmonstitution - what gov't wants it takes, law or no

March 26, 2009
I propose that "Dueling Banjos" replace our current national anthem. Remember the 1972 movie Deliverance with Burt Reynolds? OK, recall that scene of the goofy looking kid plucking out "Dueling Banjos" on the porch? That kid was supposed to represent a backwards, inbred, and half sentient hillbilly if you'll recall. Well, that is officially the United States of America today. 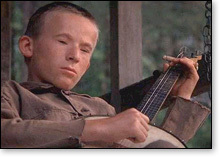 No, I am not saying that the country is like a slack-jawed southerner, but is instead like an inbred, uneducated fool. I am not talking about genetic inbreeding here, either. I am saying this country has become like a dumbed-down, socially and historically illiterate, inbred, incurious, fool, one that understands one thing and one thing only: entertainment. We can thank our putrefying "education" establishment for this as well as the coarsening culture about us.

The reason I am drawn to this sad conclusion is the complete ignorance of the people of this country to the rule of law. Not just the ignorance evinced by the self-empowering politicians and the activist judges, but the bulk of the population. The Constitution has at last become a document that has no meaning to the largest number of Americans.

There are many culprits that have brought about this sordid state of affairs. Starting at the very least with the nation's first education destroyer, John Dewey, and his contemporary Charles Beard, a villain from the field of American historiography, and proceeding through FDR's socialist revolution, the Warren Court, and LBJ's "Great Society," and up to today's Obamanation. From among these touch stones in time we have seen several generations now of citizens that have no regard for anything in the document that serves as the supreme law of the land.

We've seen Eminent Domain warped until it serves as an excuse for theft by any government that so declares its use, unparalleled use of police powers, such abuse of taxing privileges that is startles the mind, and a complete elimination of capitalism. We've seen abuse after abuse of our founding principles that has for decades accosted the average citizen. And what have we done as a polity about all this? We've continued to elect, over and over again, those that have made no bones about their contempt for our national character and laws.

And why have we done this as a nation? Why have we turned a blind eye to the essentially anti-American political ideals espoused by our judges, our representatives, our educators and media personnel? Why have we stood idly by as the Constitution has been torn up in tiny little pieces and casually thrown to the four winds? That we think we are getting "free stuff" from them is one reason. But another reason is because the bulk of us have no idea that it's even happening. Most Americans have such little knowledge of the Constitution, its meaning and our traditions and history that they are entirely ignorant at what is being lost.

Sure many "feel" that something isn't quite right. Many decry the state of things and have a vague feeling, maybe even a certain feeling, that things are off track. But few have the slightest idea why.

This situation has been created on purpose by our schools, of course. Our system of miseducation has created an America that simply doesn't understand why we should be so upset by the abrogation of this Constitution thingie?

Take a look at Illinois, for instance. In a case perhaps headed to the Supreme Court (no reliable observer of the Constitution itself) a casino owner is suing the State of Illinois for "taking" its property  in tax money levied  for redistribution to another business.

What happened under the estimable Governor Rod Blagojevich is essentially this: Blagojevich, who received large contributions from the horse racing lobby in the state, took thousands of dollars from Illinois casinos via state tax law so that he could give that money to horse racing tracks to prop up the struggling horse racing industry there.

The traditional definition of a "taking" would be that of a government confiscating land from private individuals or companies to redistribute to other individuals. Money has not been considered in the same way as confiscation of land in the past as a definition of a "taking." But what is the difference in this day and age, really? Especially in an era when money is often a larger segment of a person or company's holdings than land is? And how is it not like a bill of attainder when a particular industry is taxed for the support of another one?

By rights, the people should fear this untrammeled government power. This sort of un-Constitutional, anti-capitalist, statist power would traditionally have been the stuff of tarring and feathering of politicians and state employees. This sort of thing would have seen tax collectors being driven out of their homes by "mysterious" fires and social ostracizing. Barring that sort of traditional outrage, these sort of politicians should at the very least find themselves out of office at the public's earliest opportunity.

But who in Illinois even knows this is going on? A sad few, for sure.

Unfortunately, Americans are completely unconcerned by the 100-year assault on the Constitution. In fact, few are even aware it is going on.

So strike up a chorus of "Dueling Banjos" so that we can all smile blankly into the distance as we are destroyed from within. Let's enjoy the tune while it lasts because as soon as it's over, we will trail off into a haze of a self-induced stupor, drooling onto our bib overalls as our nation is allowed to rot around us.