June 15, 2009
Back in 2005, the Old Media was all atwitter over a supposed "plant reporter" at a Bush press conference. The Old Media made a big deal out of this guy and used it to try and cast the Bush White House as employing some sort of underhanded control of information. Flash forward to today, President Obama held his Healthcare townhall in Green Bay, Wisconsin and it turns out that Obama's first "spontaneous question" from the audience sure seems like a "plant" in the same way as the previously mentioned situation in 2005. Will the media take notice? 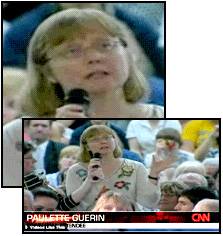 Naturally, President Obama wants people to think his "townhall meetings" are legitimately open to just any American to attend to ask him the tough questions. The June 11 meeting on Healthcare, of course, was supposed to feature spontaneous questions for the president from the audience about a takeover of nearly 20% of the nation's economy with his healthcare plans. But a closer look at this townhall in Green Bay, Wisconsin might disabuse anyone of the notion that spontaneous questions really were taken from the audience. Granted many feel that these sorts of events are wholly manufactured, anyway. But that isn't how Obama has been sold. He's the "serious" one, the one that doesn't mess around, right?

One of Obama's first questions from the audience wasn't from a mere concerned citizen, but from a former Democratic Party candidate for Congress that wants a socialist, single payer system to be implemented raising the suspicion that the administration knew exactly who was going to ask questions and what they were going to ask.

This questioner can be seen in a CNN video covering the Green Bay event. The woman is identified as "Paulette Guerin" and labeled as an "attendee" of the meeting on the CNN segment. In fact CNN got the spelling of the woman's last name wrong, it's not Guerin, but Garin. Additionally this "attendee" is far from just the average Wisconsin citizen just out for the day to hear the president's ideas. Paulette Garin is far more than just another one of the folks.

President Barack Obama said if he were building the health care system from scratch, a single payer system would be the best approach. Senator Russ Feingold said he'd support a single payer system over our current system, which he called a "mess." HOWEVER, both President Obama and Senator Feingold recognize that our nation has a long tradition of health care through private insurance companies and that trying to eliminate their influence is an almost insurmountable task.

This is why it is imperative for each of us to contact our President, Senators, Congresspersons and all other elected officials stating our support for a single payer system. They need our help to overcome the powerful well funded lobbyists working against Single Payer.

Garin also absurdly calls healthcare the "Civil Rights Movement of our time." Healthcare is not a "right." It is impossible for it to be a right.

Garin is not an unknown in Wisconsin Democratic circles, to be sure. And certainly it is a bit hard to believe that with all the hundreds in that audience Garin just happened to get a mic to ask a spontaneous question, isn't it? The whole thing smacks of the probability that Garin is a shill put forward by the administration in conjunction with the local party establishment. So much for an open debate.

Finally, what happened to the media that would highlight with such relish these sorts of manufactured presidential moments? Is a plant at a presidential townhall meeting somehow no longer newsworthy?