Last night I was invited to attend a Christmas get together sponsored by the Illinois Policy Institute. This year's theme was feeding the hungry in Africa and bringing economic freedom to developing nations. We heard some interesting presentations from Paul Wormley of the One Acre Fund as well as Tim Probasco of Opportunity International, both involved with helping subsistence farmers in Africa and India to become self-sufficient and to work toward creating financial success by selling their products at market. Both organizations take different approaches toward the same market oriented goals and both are efforts worthy of support. Best of all both organizations base their assistance on free market principles as opposed to mere charity work.

But, before the serious discussions of hunger in Africa and India and economic assistance to the impoverished began, we were serenaded by a charming group of kids from a local Chicago school operated by the KIPP: Ascend charter school program. 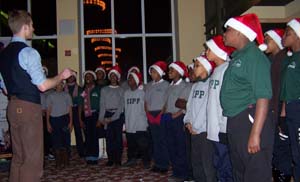 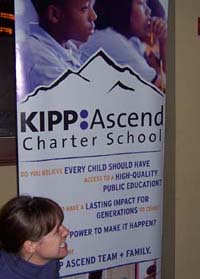 The kids sang a few old standbys, but they also took up the Grinch theme song from the old Dr. Seuss cartoon as well as a title from the A Charlie Brown Christmas album arranged by Vince Guaraldi. That soundtrack from the 1965 (has it been that long?) cartoon really is a great little Jazz album. It's worth listening to any time of the year and if you've never heard the whole thing, go get a copy. Guaraldi had a very comfortable, easy feel to his Jazz and his Peanuts album really is a great listen.

Anyway, the kids from the KIPP charter school did a great job and it was really fun to watch them entertain for us. Believe it or not, Illinois has seen an improving environment for charter schools. Chicago is as good a place as any to "let a thousand flowers bloom," if you will, so it's good to see charter schools making headway in the Windy City. The Illinois Policy Institute does some important work with education and has posted a great little video on charter schools on its website. Watch the video.

The kid's performance was followed by some mingling time where I had several interesting conversations with good conservative Illinoisans. I snapped the picture below during this time. 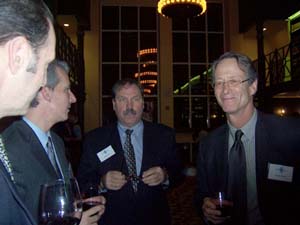 After some mingling, snacks, and the open bar, the night's discussion began. 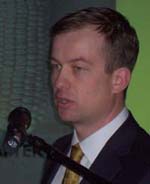 Up first was Paul Wormley of the One Acre Fund. Wormley let us know of the dire situation that most Africans face just trying to survive. One in six children die before they reach the age of five, families live on an income of six cents a day, and starvation is a constant companion. Sheese, where's the Christmas cheer, right? Well there is good news with the work being done by One Acre Fund. This group comes in and offers families $200 seed money to start up their family farm. The group offers agricultural training and then helps the family get their left over product to market introducing them to farming as a business. And this is no mere charity. The African participants are expected to pay back the seed money as their new business takes off and thrives.

More and more people concerned about world hunger are starting to realize that food aid is not an effective way to solve world hunger. Yes there are times when massive aid is necessary, such as times of tragedy or natural disaster. But flooding an underdeveloped area with aid does not help feed the people for the long term. What happens is that all this "free" food aid simply ends up depressing a local economy, strangling it in its crib. Growing a local economy is far more effective in bringing people out of hunger than mere "free" aid. Here is the "How it works" message on the website of One Acre Fund:

One Acre Fund is a non-profit organization started in January 2006 with the goal of completely re-thinking how to solve the chronic hunger problem in Africa.

We think that food aid is at best a temporary solution, and instead have put together a permanent, proven investment package for farmers and their families, which doubles farm income by providing seeds and fertilizer, weekly farm education, and market access. This investment package is the core of our program.

Since our founding we have expanded to serve 12,000 families in 7 districts in Kenya and Rwanda.

This is a market-oriented effort, not a "charity" that ends up harming the folks it is supposed to help. 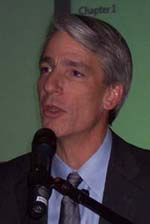 After Mr. Wormley finished his short presentation, IPI CEO John Tillman came to the podium and reiterated the Institute's dedication to free market solutions to today's problems. He reminded us that the capitalist system is truly the best system. As Kennedy said is is that "rising tide that lifts all boats." Or, as Tillman paraphrased Churchill, capitalism is the worst system... except for all those other systems.

As I sat listening to Mr. Tillman, I was reflecting on the afternoon's broadcast of the Michael Medved show. Medved was interviewing some British college students that were visiting America for the first time. On the show a young British woman told Medved that she disapproved of capitalism because it was "selfish" and she was raised "not to be selfish." Sadly, her uniformed, even feckless understanding of what the basic ideas of capitalism are is too widely spread among today's young people.

This young lady simply hasn't a clue that capitalism is the channeling of "selfishness" for the good of all, not some immoral unleashing of that all-too-human emotion. She has a child's understanding of where selfishness (more properly called self-interest) fits in to the market forces that make this world a better place for each and everyone of us. In fact, capitalism is built on that very selfishness, it serving as the engine that inspires people to reach out and create wealth. What this girl simply had no understanding of was that the very selfishness that creates wealth also creates opportunity for those surrounding the creator. Without self-interest there is no engine and capitalism channels that into success for all. Unfortunately, too many youngsters (some of them now in government) have a wholly malformed knowledge of how good for humanity capitalism truly is but are stuck with this simple-minded "good" vs "bad," emotive way of thinking of capitalism.

There is a famous saying by the Jewish religious sage Hillel the Elder that goes: "If I am not for myself, who will be for me? But if I am only for myself, who am I? If not now, when?" This Jewish maxim can be easily translated to a capitalist one by understanding that we are the only ones that should do for ourselves, but we cannot be selfishly for ourselves because we cannot grow, cannot share our lives and passions with others and cannot, therefore, learn of ourselves. Finally, if we don't do it now, when will we start? In so starting we create community and opportunity for all around us.

After Tillman spoke we saw a video from Opportunity International, that is also an NGO that assists individual citizens in developing nations learn how to begin a business, save money, and take out loans. I recently read that "microfinancing" is a new banking model that has helped India grow so quickly and OI specializes in this business model helping struggling folks in developing nations find success and prosperity. 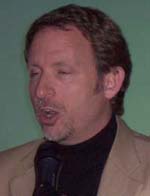 OI representative Tim Probasco said that they often focus on mothers in these developing nations because they've found an amazing amount of stability in this method. He related a story about a grandfather from India that told them that at first he was not pleased that his daughter-in-law was getting involved in this business start-up, but when he saw that his grandchildren grew happy and well-fed as well as better educated, he let go of his traditional ideas of the "place" of women as second class citizens in his culture. He said that he was proud that his daughter-in-law decided to work with OI and was also proud that his own son then joined this business effort and saw success for the whole family.

It was heartening to see these two excellent market oriented organizations bringing progress and opportunity to Africa and India and other developing countries. Both The One Acre Fund and Opportunity International are deserving of your support. Perhaps for Christmas you might find your way clear to offer a Christmas donation to help these groups help developing nations grow?

Please donate to the One Acre Fund HERE

Of course, if you want to donate closer to home, there is always my hosts for the night, the Illinois Policy Institute (donate HERE), a great policy group that helps guide market oriented education, tax and government policies for our great state.

Lastly, I want to urge every blogger and blog reader out there to reach out to your own state policy group. Every single state has its own conservative, market oriented think tanks or policy centers that help further our conservative ideals. They ALL need your help. Not just with money but also with participation. Most of these groups have events that you can attend and publications that can help you better understand your own ideas on why conservatism is the right message.

Many of us in the blogosphere instinctively know that conservatism is intrinsically right, but some of us may not quite know how to say it. As I said, each state in the Union has several state policy groups that can help you find the right words and policies to advocate for in your own area. Search them out. They are a resource you should not deprive yourself of.

Need to find a state think tank or policy group in your area? A great resource for that is the State Policy Network. There you'll find a Directory Page that has an interactive map that will take you to all the conservative groups in your home state. I'm telling you, folks. SPN is a great way to better inform yourself about the important issues of our day.