Warner Todd Huston
Book review: what are these tea parties about, anyway?

January 14, 2010
A new book about the Tea Party movement  and a movement it really is  will soon be hitting the shelves. "A New American Tea Party" penned by John M. O'Hara, one of the many folks that helped bring us some of those protests in early 2009, is a book that hopes that the reader will come away understanding and appreciating the Tea Party movement as a truly grassroots happening, a spontaneous outpouring of interest backed by true red, white and blue American ideals. 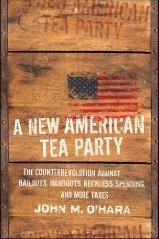 Author O'Hara, himself an early Tea Party organizer in Washington D.C. and the Chicago area, answers several questions with the book: what sparked the Tea Parties; is the name "Tea Party" itself a proper sobriquet; what do they mean; what does the future hold; and how do you make more?

The first thing one might notice is that O'Hara writes in a crisp, conversational style with short subchapters. This makes it ideal for reading bits at a time. This is not a dense treatment and I think his style makes the book very accessible to people of all ages  without talking down to the young or dumbing it down for the more advanced reader.

Now, one of the main messages about what the Tea Party movement "is" that O'Hara wants to hammer home is that it is not a revolution, but a counterrevolution (his italics). O'Hara says that Tea Party goers intend to reclaim American principles and that their activism is a reaction to the anti-American principles of the left and the big government types that themselves spawned the alarmed activism of Tea Partiers. I think that is obviously right.

Unlike its enemies that tried to spin the birth of the movement into some nefarious, top-down creation, the Tea Parties were a reaction to the wild overreach of leftist, anti-American, anti-capitalist, ideas. There simply was no secret back room meeting in the bowels of Fox News or Republican Party Headquarters. In fact, the political and media establishments were both taken unawares by the movement and to this day aren't sure how to react to it or how to take advantage of it.

O'Hara does a fantastic job of describing the chaos that reigned during the early birth of the movement and he successfully dispels the claim made by the left that the movement is "Astroturf," or was created by leaders from the top. Why am I so sure he has this all exactly right? Because I was there.

After his original Tea Party event in D.C., O'Hara joined the effort in Chicago then being organized by Eric Odom based on the success of his taxdayteaparty.com website. I've known Mr. Odom since his 2007 Arizona-based Conservative Leadership Conference of which I was a part as a speaker and volunteer for the event. Amusingly, neither Odom nor I can remember how we two got hooked up but as I've been an Internet writer since before the Towers fell in 2001 and as I've been at this even before anyone ever heard of a blog it was a natural that we end up working together I suppose.

So, I was there the whole time that the Chicago Tea Party was being organized. I can attest to the facts in O'Hara's account. I was also present at the Chicago Tea Party itself and submitted a video report of the event that very day. It most certainly was like herding cats and it was definitely not led from some highly placed politicos. Since the event I've sat in on several of Odom's organizational conference calls and sat with him on a panel or two and his constant refrain is, "if some powerful people ran my Tea Party, I'd like to know who to send the bills to."

For sure this was as grassrootie as a grassroots movement could possibly be.

Since O'Hara stresses that what we have here is a movement led from below, not above, I foresee a danger to its ultimate success. Granted this absolutely is a grassroots movement and needs no national leader per se. That is, there doesn't need to be any leader that takes over the Tea Party movement itself for his own advancement. But, as I've argued, to insist, as some have, that the Tea Party goers don't need any leaders at all is absurd. (see here and here)

O'Hara talks of the legacy of Reagan, but I'd like to point to one aspect of Reagan's success that no one has pointed out when discussing the Tea Parties. This discussion can take the form of a question: Did Reagan create the conservative movement? The answer is "no." What he did was take the intellectual underpinnings provided by your Irving Kristols, William F. Buckleys, and Russell Kirks, et al, meld them with the excited activism of the newly born religious right and fit them into the existing frame work of the Goldwater machine. He then brought them all to victory on a national level.

But notice that he was a leader? Notice that he didn't have to have created it all, but only had to draw all the strings together into a strong rope of conservative voters. In so doing he gave the movement focus and a winning team to join. He gave them something tangible to which to belong.

My fear is that if we keep going forward and no few leaders come forward to accept the Tea Party mantle, or at least accept the Tea Party mien, we will find that the enthusiasm of the Tea Party movement will dissipate and go away all to no ultimate success. After all, how many will keep their nose to the grindstone if it doesn't seem as if politics is going their way? More likely they will quit in disgust and we will lose the energy of this moment to missed opportunities.

It's all fine and good to revel in the fact that this is a grass roots movement, but success oriented conservatives won't stick with it long unless some goals are reached. So, I think we do need leaders to come forward and soon, not necessarily to take over the Tea Parties themselves, but to accept our ideals and bring them to a local and national stage.

One of the things that O'Hara does well here is to detail the perfect storm of leftism that beset the country between the last year of Bush's term and the onslaught of the "age of Obama." In fact, most of this book is just that, a history of the leftist attacks on America that spawned the counter revolution that is the Tea Parties. It is quite stunning, indeed, to see all in one place how bold the left has been in launching this leftist assault on America. Only moments after Obama took office the left quickly started rolling an avalanche of doctrinaire, communist styled policies ideas hat frightened much of the country.

From self-serving financial finagling to fascist attempts to control the public debate through a threatened revival of the fairness doctrine, O'Hara details every manner of extreme left-wing trial balloon floated by Obamaists prior to the Tea Party movement hitting the streets. This avalanche of leftist policy ideas floated by Obama and his followers serves as a reason why conservatives and libertarians were alarmed enough to take to the streets, protest sign in hand. And given the fact that parading about the streets like nuts with signs and costumes is so against the average conservative's personality, it took this perfect storm of anti-American leftism to get Tea Party goers off their duffs and onto the picket line.

O'Hara wraps up the book with some good rules of thumb on how to organize, rules that should help the nascent Tea Partiers of the future who start out without the benefit of being steeped in the art of the protest with training by such radical groups as ACORN or the SEIU. The left has had decades of experience in protesting, the right but little and these tips are timely and helpful.

One thing is sure, there has never been in American history such a grassroots outpouring of interest in things political as this. There has never been a political happening as spontaneous, as leaderless, and as immediate as the Tea Party movement. Without a doubt this could never have happened in any other era of history. Why is that? The Internet. Without the Internet, without that way of communicating not controlled by some existing, aged infrastructure, one not controlled by a party or media corporation, such a gathering could not have happened in the manner that it did.

And maybe, just maybe, because of the Internet we don't need the same sort of strong national leaders that we once did? Maybe my worry that we are missing such leaders is unfounded? What ever the future holds, O'Hara's tale of the Tea Party movement is worth reading and is the best source of "hope and change" I've seen since Obama won office.

I recommend "A New American Tea Party." It is well worth the read for a history of the Tea Party movement and the era that spawned them as well as for a primer on how to make more or the former and less of the later.