February 9, 2010
Marvel Comic's Captain America is the mightiest soldier with the super powerful secret soldier formula that makes him a super man. Sadly, this musclebound hero that took on the whole Nazi army during WWII seems to be afraid of those American people who've joined the Tea Party movement. Not only is Cappy quaking in his little red booties, but he's sure that the Tea Party folks are dangerous racists, too.

Isn't it wonderful that a decades-old American comic book hero is now being used to turn readers against our very political system, being used to slander folks that are standing up for real American principles in real life  and one called "Captain America" at that?

In issue number 602 of Captain America, a new story line has begun called "Two Americas." In it the current Captain (there have been a few of them, apparently) is on the trail of a faux Captain America that is mentally deranged and getting chummy with some white supremacist, anti-government, survivalists types going by the name of "the Watchdogs." While investigating this subversive group, Captain America and his partner The Falcon  a black super hero  have decided to try and infiltrate the secretive organization.

In preparation for the infiltration, Marvel Comics depicts the two super heroes out of costume and observing from a rooftop a street filled with what can only be described as a Tea Party protest. The scene shows crowds of people in city streets carrying signs that say, "stop the socialists," "tea bag libs before they tea bag you," and "no to new taxes." Naturally, the people in these crowds are depicted as being filled with nothing but white folks. 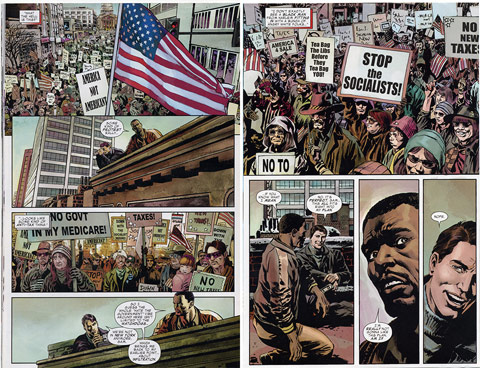 The black character asks the out-of-costume Captain, "What the hell is this?" And follows that with, "looks like some kind of anti-tax protest." The Falcon character then snidely tells his partner the Captain, "So I guess this whole 'hate the government' vibe around here isn't limited to the Watchdogs."

The two then discuss their plan to infiltrate the subversive group that Marvel comics seems to be linking to the Tea Party movement. This discussion culminates in The Falcon wondering how a black man would do such a thing. "I don't exactly see a black man from Harlem fitting in with a bunch of angry white folks," he tells the incognito Captain America.

The Captain tells him, "no it's perfect... this all fits right into my plan." After this we find that the Captain's plan is to send the black man into a redneck bar to pretend to be a black man working for the IRS and to get everyone all mad... because... well, you know that every white person is a racist that hates black civil servants, right?

So, there you have it, America. Tea Party protesters just "hate the government," they are racists, they are all white folks, they are angry, and they associate with secretive white supremacist groups that want to overthrow the U.S. government.

Bet you didn't know when you were indulging your right as a citizen to protest your government that you were a dangerous white supremacist that wants to destroy the country, did you? Bet you didn't realize that your reverence for the U.S. Constitution was a subversive thing to do, did you? And I'll also bet that you never imagined that you'd scare the little blue panties off of Captain America!