Warner Todd Huston
Photojournalist mad at RightWeb's use of his photo

February 18, 2010
A photojournalist from the St. Petersburg Times in Florida is very upset at you people. He wants you all to know that you should be ashamed of yourselves for misusing his photo.

Ed Fountain is the photog that took the famous picture that the right-o-sphere guffawed at a few weeks ago showing President Obama strangely bowing to Tampa Mayor Pam Iorio. 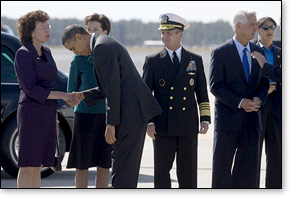 In light of the many times Obama has bowed to the floor in supplication before several of the world's leaders  making himself look like a weakling to the world  conservatives made light of this photo saying that it shows that this weakling president will bow to anyone. After all, why the heck would anyone supplicate themselves before the Mayor of Tampa, Florida? He's the president, fer cripes sakes!

Well, Ed Fountain is torked off at you mean, rotten righties for so misusing his photo. How DARE you use his picture for your political message, he says! Not only does Fountain reveal himself to be a very upset lefty, he reveals himself as a fellow that takes himself just a tad too seriously.

The tightly wound Fountain shakes his finger at the folks that so abused his handiwork. And to prove that Obama was perfectly in the rights to bow before a mere mayor Fountain has a perfectly reasonable explanation for that absurd Obamabow:

I had captured him in a respectful bow, a traditional greeting of one's host. As mayor of Tampa, Iorio was just that: Obama's host.

A "respectful bow"? You're kidding, right Ed? I defy anyone to find a lot of "respectful bowing" going on at American political events where high-ranking politicians are greeting each other. You won't find it because it doesn't happen. People may incline their head (usually to the right, by the way) when they meet someone, but in America no one bows. Fountain is breaking his own back with his gymnastics to explain away Obama's odd behavior.

But this obviously sycophantic covering by this left-wing photog isn't the most amusing thing about his article taking the right to task. It is his assumption that his work is somehow sacrosanct.

Nothing makes my blood boil more than seeing an image, particularly one I created, used outside of its original context to promote a particular agenda. Further compounding my frustration is that it is totally out of my control when it happens. People criticize the media constantly for showing bias, or not reporting the whole truth, but here is an instance of an accurate depiction of an event being recycled and repackaged with much bias. Fair? I don't think so.

Get a grip, Eddie. Not a soul on Earth knows it was even you that took the photo. Still, there was no "out of context" use of the snap shot by the right. The man bowed to a simple mayor as if that mayor were a Saudi King or the Japanese Emperor. Of course, the fact is he should never have bowed to those two or to the mayor of Tampa, Florida.