May 14, 2010
It is, as we all know, the year 2010 and the era of Obama has fairly begun. Accordingly the commissars of good art taste in our schools have spoken: no kid's artwork that makes The Obammessiah out to be a commie will be allowed. Interestingly there was another time, another year when things were different. In 2005, as it happened, another kid's Bush-is-Hitler artwork received a wonderful award for it's inventiveness. How times have changed, eh? 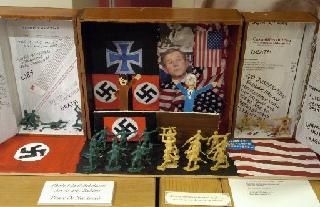 Back in those hoary years of 2005 when the evil, evil Bush was destroying the world, our schools were happy to host kid's art that made Bush out to be one of the worst human beings in history. Bush-is-Hitler was so acceptable to our schools that Jeffery Eden, a 17-year-old student, was celebrated when he created his award-winning Bush diorama that, juxtaposed "Hitler quotes with statements by Mr. Bush, Nazi swastikas with American flags, desert-colored toy soldiers with olive plastic figures."

Young Mr. Eden's "work" was so wonderful he was awarded a "silver key at the Rhode Island Scholastic Art Awards." His Charelstown, New Jersey teacher, Lynn Norton, was so proud of him she gave the budding Leonardo an "A."

Eden's "work" was less than worthy as art being exclusively a political statement. All it consisted of was some photos cut out of a magazine and a couple of kid's toy soldiers pasted on a hunk of cardboard. Junk as art, really. Yet these Bush hating school thugs were overjoyed at this hack-work.

But, that was 2005 when dissing a president was all the rage in our schools. Today is another era, apparently, for today a child in Hallsville, Missouri has had his piece of art pulled because it depicts Obama surrounded by symbols of communism certainly associating Obama with that evil, failed ideology. 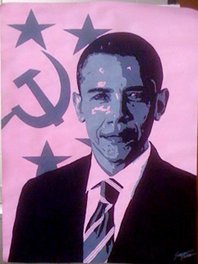 Art teacher Brittany Williamson said that her student simply wanted to "get a reaction" with his CommieObammie painting. She thought the painting was quite well done, too. Art wise, she is quite right, too. Compared to the 2005 garbage, this CommieObammie piece is technically good. But school administrators were not so sanguine.

Although Williamson thought the Hallsville High School sophomore's painting was "an amazing piece," it received not-so-amazing critiques from some school staff and visitors who complained to Williamson and Superintendent John Robertson. The painting was taken down Monday after being displayed for nearly two weeks.

The school would not identify the name of the student.

So, here we have a wonderful juxtaposition of how our schools treat presidents. Unsurprisingly it looks like what we have here is the idea that Bush/Hitler is goood, but Obama/Commie is very, very baaaad. Should we be surprised that our left intoxicated schools excoriated Bush and were consequently happy to allow students to wallow in Bush Derangement Syndrome while they are now so sycophantic for Obama that they will allow no criticism at all?

I guess there is no reason to be surprised as it seems pretty much par for the course for our fetid elementary school systems, but it is worth noting nonetheless.