July 9, 2010
When times were flush, I guess it didn't seem so outrageous for the First Lady of the White House to fly about the country "visiting" places as if she were an important part of our national government. 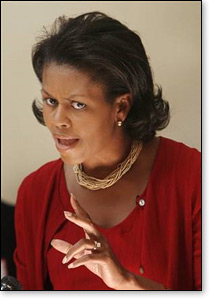 I suppose it was nice to have a First Lady leading by example with her advocacy programs and helpful ideas. There were the anti-drug programs, the literacy programs, the this-n-that programs that taxpayers spent millions on. There's the big staff and millions of dollars in office expenses. Maybe when we weren't trillions in debt these boondoggles didn't seem so outrageous?

That was back when millions were to be had at the drop of a hat. Today is a different era. Today a First Lady should be leading austerity programs, and cost-savings drives.

But not our Queen Michelle. She's flying about the country on million dollar "date nights" with the prez, she's flying off to Camp David every time you turn around and she's taking whirlwind trips around the world all on the taxpayer's dime.

No austerity for our little Miss Michelle, I'll tell you what.

And now? Why, now Michelle-My-Bell is making plans to "visit the Gulf Coast oil spill region" as if she is some sort of potentate touring her outlying tracts of land.

Yes, the angriest First Lady of them all is going to pack her royal bags, wing off to the coast, and wave to the masses from the royal coach as she inspects her subjects woes due to her husband's continuing impotency there.

It is quite a sickening display of government waste to be spending the millions it will take for this "visit." And Michelle, must I remind you, is NOT an official anything in our government. Her "visit" is as immaterial as mine would be to the White House! She has no role, she has not power, she was not voted by the people to do anything. And yet, millions of our money will be thrown down a rat hole for this pointless "visit."

Millions more wasted by this spendthrift president and his "lady."

And yet, even as Obama and his cohorts allow his wife to spend millions of dollars on "visits" across the globe and now down to "visit" the Gulf oil spill, the Democrats have refused to fund such visits by actually elected officials that want to tour the Gulf.

Early in July Rep. Steve Scalise (R-La.) wanted the House to fund a trip for 10 lawmakers to visit the Gulf, but the House Democrat majority leaders denied the funds for the trip.

So, actual lawmakers, people actually elected to represent us, people whose job IS to come up with solutions to our national problems are denied funds to visit the disaster area, yet a mere wife of an official is handed millions to go gallivanting?