October 2, 2010
Naturally the Old Media is doing its level best to pump up the "One Nation" rally. The lefty protest is gathering in front of the Lincoln Memorial on the National Mall in Washington D.C. today, Oct. 2. But despite the glowing reports by the media there is no denying the fact that few people have turned out for the anti-Tea Party event sponsored by some 400 of America's most extreme left-wing organizations and their associates in uniondom.

Despite months of planning the event seems like a bust. Sponsored by dozens of unions and groups such as the Communist Party USA, various socialist organizations, Code Pink, the racist Latino group La Raza and other extremist groups, organizers hoped to energize the left just ahead of the midterm elections just one month away. But the numbers that have turned out — even with the streets full of union-sponsored buses — pale in comparison to the Glen Beck rally that many feel the lefties were trying to emulate. 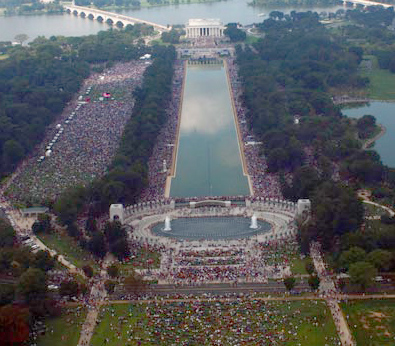 A view of the Glenn Beck 'Restoring Honor' rally taken from atop the Washington Monument. This shot clearly shows the throngs of people that attended the event. (PHOTO CREDIT: Doug Schantz /CNN) 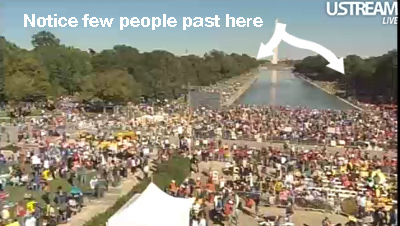 This is a screenshot of the live Ustream video just as clearly showing that the crowd attending the 'One Nation' rally does not extend very far down the reflecting pool at the foot of the Lincoln Memorial.

Still, the Old Media is putting a sunny face on this debacle. The Washington Post, for instance, says that the One Nation rally is "energizing Liberals," despite that few have turned out to participate.

"Progressive groups hope to draw tens of thousands of supporters to the Mall on Saturday and create a show of force that will rival the conservative tea party movement," the paper helpfully states in its first paragraph. But photos of the attendance clearly show that only a few thousand are actually in attendance.

The crowd spread does not get very far down the reflecting pool at the foot of the Lincoln Memorial, a far cry from the hundreds of thousand that peopled the Beck rally only weeks ago. Beck's crowd stretched all the way down to and past the WWII Memorial and also filled up the hillocks on either side of the pool. Beck's crowd was estimated at well over 300,000 participants.

In its on-air report, MSNBC helpfully stressed that the rally "isn't an anti-Tea Party rally," but amusingly when the studio host asked the on-site reporter how some of the signs read, one of the first ones he related was an anti-Tea Party sign.

Additionally, the L.A. Times has a report that reads more like a press release from rally organizers as opposed to an actual report. No mention of the paltry crowd size is made. If a conservative rally had such poor attendance that news would probably lead the Times's report.

Bloomberg also did not mention any estimate of the crowd size but did regurgitate the rally organizer's claim that they'd have "more than 100,000" participants. Clearly they do not, but Bloomberg does not comment on the real facts.

But Bloomberg did offer a laudatory description of the event's purpose. "Labor and civil rights groups gathered today at the Lincoln Memorial in Washington, the site of a rally by Tea Party activists last month, to urge more government spending to create jobs and help people suffering from the recession."

In fact, I'd dare say that if Beck's rally had turned out so few people the paltry turnout would have become the mainstay of the Old Media's coverage of his rally. Curiously, however, the numbers of this lefty rally today seem uninteresting to reporters.

Not all media outlets have drunk the Kool Aide, though. You have to hand it to the AP. Even as it waits until deep in the story, in its report the AP admitted that this rally was, "far smaller, with sparse groups lingering around the reflecting pool and other monuments."

Good for the AP. Still, it is likely that a large portion of readers wouldn't keep reading to get to that news buried down in the story, but at least AP reported the truth.

In any case, it is clear that the Old Media is trying its hardest to avoid discussion of the tiny audience that this lefty rally has garnered and is playing up rally organizer's press releases.

Liberty Central has some great photos of some of the signs in evidence at this failed rally, too. As expected, many of these signs are from anti-American socialists.