January 28, 2011
The left-wing website Talking Points Memo (known as TPM) is worried that the Tea Party-backed True The Vote effort in Harris County, Texas — home of the City of Houston — is going to successfully enlist Texans to join an effort to "true the vote" by battling vote fraud. Because of this fear, TPM has been trying to undermine the event with several left-slanted blog posts.

TPMs latest posting is artful for its vague accusations and spin, but it is short on any actual proof of the nefarious goals that the left-wing site is trying to ascribe to the True The Vote National Summit, coming up on March 25 and 26. Read closely TPM's post also has the odd effect of coming to the support of vote fraud by seeming to discount the True The Vote event. Sadly, this dismissive attitude is of a piece with the left's desire to shy people from paying attention to the massive vote fraud that they, themselves have been involved in for decades.

Typical of left-wing alarmism, TPM's rhetoric casts suspicion on everything that True The Vote is trying to do, but never makes any actual accusations. For instance, of the addition of John Fund, Andrew Breitbart, and Hans von Spakovsky to the event program, TPM calls them "three of the biggest voter fraud alarmists in the country." I guess from this we can assume that TPM doesn't care about voter fraud because it is merely alarmism?

Further down in the piece, TPM discusses the vote fraud that the Obama-supported and later criminal organization ACORN was involved in. And like much of the rhetoric the left uses, TPM contradicts itself in just a few short lines.

ACORN had been accused by conservatives of engaging in voter fraud.

Several employees of ACORN were prosecuted for defrauding the organization by submitting fraudulent voter registration forms, but those typically don't lead to actual votes.

Additionally, if there were actual convictions for vote fraud, then it wasn't merely conservative "accusations," now as it? It isn't a simple matter of partisan, right-wing accusation at all. It is FACT. There WAS voter fraud. And a lot of it.

It has hardly been only "several" ACORN members convicted of vote fraud.

Also all this poopooing of voter fraud tends to cause the reader to wonder if TPM is really in support of voter fraud? After all, that is the corresponding assumption when someone dismisses something. The impression is left that what is being dismissed is unimportant or not worth doing anything about. And TPM is dismissing vote fraud.

Naturally, the reason leftists like those at TPM dismiss voter fraud is because it is nearly exclusively a practice of the Democrat Party and has been for generations. Vote fraud is de rigueur for Democrats. No wonder TPM dismisses it. Vote fraud benefits their ideology!

And what exactly is so alarming or wrong with trying to make sure that the integrity of the vote is assured? Why should anyone be against making sure that our elections are "true"?

The left's dismissing of this whole effort is telling, for sure.

Now, if you are in or near Houston, Texas and would like to attend the True The Vote National Summit visit the event info page now. 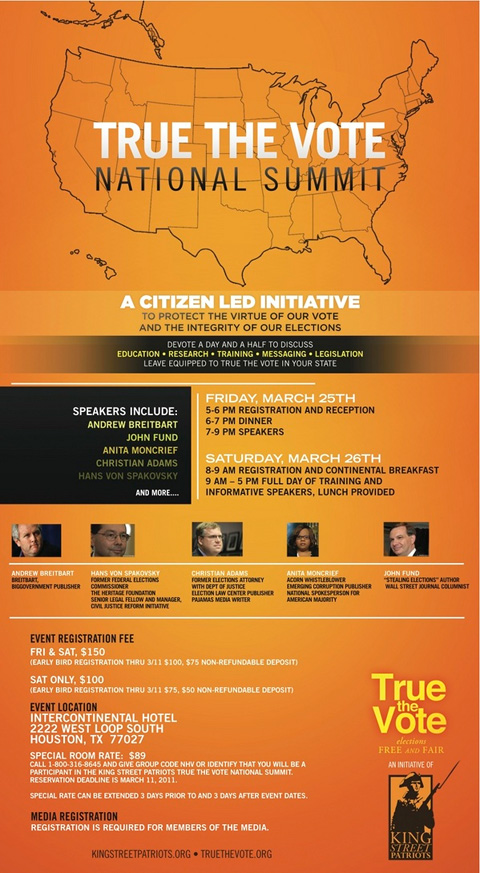