Jake Jacobs
Can constitutional conservatives be consistent within their righteous cause? 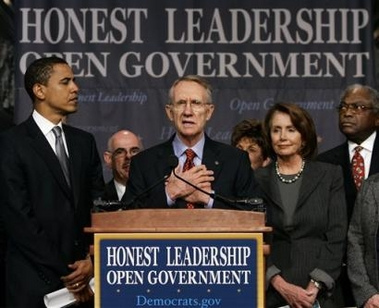 Constitutional Conservatives like myself laughed with sadness when in 2006 Democratic Party leader Nancy Pelosi made the incredulous statement that, "We'll turn the most closed and corrupt Congress into the most open and honest Congress." We were not fooled to think that the corrupt Progressive Pelosi was actually going to change D.C. politics for the better. Whether its Democrats or Republicans in charge of Congress, Congress has lost its moral compass as they have discovered that they can bribe the American people with the people's money. Yes there are a few honest Democrats and Republicans in Congress but far too many not only ignore the Law of the Land, our Constitution, they are complicitous with the President, the Supreme Court and with the American people in the destruction of the American Republic. 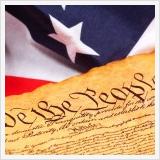 Did you say, "the American people" Jake?!

Yes, I did, the American people.

The corruption of our Constitutional Republic is a two way street.

President James Garfield was spot on in 1877 when he said:

"Now more than ever before, the people are responsible for the character of their Congress. If that body be ignorant, reckless and corrupt, it is because the people tolerate ignorance, recklessness and corruption. If it be intelligent, brave and pure, it is because the people demand these high qualities to represent them in the national legislature.... If the next centennial does not find us a great nation ... it will be because those who represent the enterprise, the culture, and the morality of the nation do not aid in controlling the political forces." 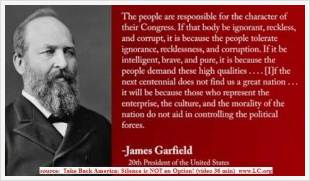 The American people are not controlling the political forces with righteousness anymore. Many times when I speak at GOP, Conservative, Libertarian and Tea Party events I hear conservative citizens espouse limited constitutional government and rightly accuse the Federal government of spending too much money and yet at the same time they demand that the government not touch their Social Security, Medicare and other entrenched entitlements they enjoy.

Yes it is true there has been an ever increasing destructive explosion of debt spending by the Federal Government and an ever growing Federal encroachment on our Liberties but much of our BIG Government problems stem from millions of Americans and many of them "contradictory conservatives" who demand that the Government leave their government goodies alone.

It is a sad commentary when States' Rights advocates passionately defend our wonderful 10th Amendment and then freak out when the Federal government cuts their funding to State Budgets. Far too many Conservative Governors, State legislatures and municipal leaders feed at the Federal trough under the guise of funded and unfunded mandates while knowing all along that the "Sugar Daddy Uncle Sam," unlike the States, has a Federal Reserve printing press and centralized collective power to disseminate funds across the land controlling more and more of our lives through National bureaucratic dictation.

Unfortunately authentic and consistent Constitutional conservatives are rare to find these days and consequently freedom in the American Republic dies.

When as a public school teacher I defended Wisconsin Governor Scott Walker I knew I was going to lose some part of my government goodies such as a portion of my retirement and health care but I was consistent within my Conservative philosophy by accepting Governor Walker's Conservative solution to our States spending problem. Conservatives, are you willing to walk the walk when our Conservative representatives call for cuts and adjustments in Social Security, Medicare and a sundry of other Federal programs?

When Wisconsin Governor Walker refused Obamacare's Medicaid expansion and adjusted Wisconsin's Badgercare's eligibility, not only Liberals cried bloody murder but there were many Conservatives just as agitated as they demanded that the government leave their entitlements alone.

My point is this:

Progressives and Liberals in the last 100 years have not only succeeded in transforming our once thriving Federal Republic into a BIG Brother National enterprise, they have convinced, duped, and indoctrinated millions and millions of Americans into believing that a limited Federal Government that function's solely within it's enumerated constitutional parameters is antiquated, ineffectual and heartless. Progressives, Liberals, Academics, Media, and our cultural icons have convinced Americans that the government that governs best governs most at both the Federal and State level.

Where are the courageous conservative voices declaring for "We the People" that the government that governs best governs least. Leave us alone Uncle Sam! Leave us alone State Governments that at times can act as egregious as the Federal Government!

Since 1913 the people have voted for or allowed the illegal creation of unconstitutional laws that we now must live with or pay for. From the Federal Reserve, Federal Income Tax, Social Security, Withholding Tax, direct election of Senators, FDR's Raw Deal, to LBJ's not so Great of a Society to thousands of other Federal laws, rules and regulations, the people are as much to blame as Washington D.C.

The people, our fathers, mothers, grandfathers and grandmothers put the progressives and liberals in power, and now we reap what "We the People" have sown and now we must pay the Big Government piper and spender. We demand Federal government services and stuff and then scream about spending and taxes! Yes the Government lives beyond its means but so do the people.

Millions of Americans have become indolent, indifferent and insecure as they turn to government for comfort and security. Virtue is dying in America as we have forgotten the wisdom of our Founders, founders like Benjamin Franklin who opined, "Only a virtuous people are capable of freedom. As nations become more corrupt and vicious, they have more need of masters." 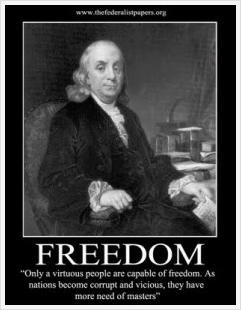 Progressive masters and Liberals in Government knew what they were doing when they distorted and twisted the original intent of our Founders' understanding of "general welfare" into Social Security, Medicare, a Great Society, Affordable Health Care, and myriads of other feel good entitlement programs in D.C. They may all be unconstitutional but the American sheep bleats to the Government wolves "forget the Constitution, feed me, comfort me, care for me, and give me security at my neighbors expense!"

Our Federal Republic cannot endure when the public demands that their representatives confiscate the public's money or prints it to secure their stuff. Why do you think there are so few true blue conservatives that survive in Congress? Their survival rate is less than that of those on the bottom deck of the Titanic.

Do we Constitutional conservatives have the guts to say, "we have met the enemy and he is us?" Let us first set in order our own house then work to rebuild our Nation's house.

By now you may be saying, "Jake I thought you believed in a Constitutional Republic of limited government? In your speeches, articles, your books you disdain the explosion of unconstitutional Federal government corruption, spending, debt, and lies." I do! But how did it get to this point? We the people did it! We are the government and the government is we. We get what we deserve.

When Constitutional Conservative Senators and Congressmen fight for us in Washington D.C. do we not realize that they cannot undo over 100 years of Progressive-Liberal unconstitutional corruption overnight? They are not only fighting anti-Constitutional forces by the National-Central government they are fighting the demographic reality that millions and millions of Americans want to have their government cake and eat it too at our expense.

The Father of our Constitution James Madison on June 20, 1788 at the Virginia ratifying convention stressed the important of the character of the American people as the cornerstone of our Republic when he said the following words:

"I go on this great republican principle, that the people will have virtue and intelligence to select men of virtue and wisdom. Is there no virtue among us? If there be not, we are in a wretched situation. No theoretical checks – no form of government can render us secure. To suppose that any form of government will secure liberty or happiness without any virtue in the people, is a chimerical idea. If there be sufficient virtue and intelligence in the community, it will be exercised in the selection of these men. So that we do not depend on their virtue, or put confidence in our rulers, but in the people who are to choose them." 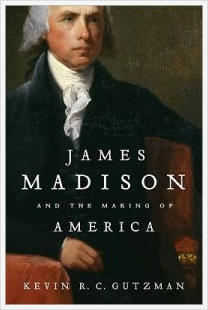 In a similar spirit the brilliant Roman Senator Cicero, who predicted the demise of the Roman Republic, said it best in 55 BC when he observed:

"The national budget must be balanced. The public debt must be reduced; the arrogance of the authorities must be moderated and controlled. Payments to foreign governments must be reduced. If the nation doesn't want to go bankrupt, people must again learn to work, instead of living on public assistance."

Our dying American Republic is being morphed from a Federal Republic into a Central-National Socialistic Democracy where corruption rules from top to bottom and bottom to top. Let those of us who love our Republic start to make a difference at the bottom and elect and support those we put at the top. 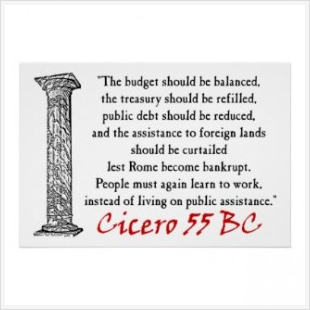