Jake Jacobs
Mother should I trust the government?

September 15, 2014
As I wrote my new book -MOTHER SHOULD I TRUST THE GOVERNMENT? during the summer of 2014 A.D. the News has been inundated with stories upon stories about Federal government scandals, cover-ups, deception, hypocrisy, duplicity and just plain old fashion government corruption. From the VA, DOJ, IRS, NSA, to the EPA , DOE and DOT we find that the concerns of our Founding Fathers like Thomas Jefferson, Patrick Henry, George Mason, Samuel Adams and many others about the inevitable corruption of a Central-National-Federal government have prophetically come to fruition. When President Barack Obama was asked about the IRS scandalous scrutinizing of Tea Party organizations he arrogantly dismissed the charges by saying there's "not even a smidgen of corruption." A few days later the head of the Federal government's Progressive Internal Revenue Service told a Senate investigative committee that they lost the e-mail hard drive that would reveal the details of much more than a smidgen of evidence that would indict the taxmen of America! Something "stinkith" not only Denmark but in Washington D.C. and its not the Potomac River, it's the smell of government lies that have plagued mankind from time immemorial. 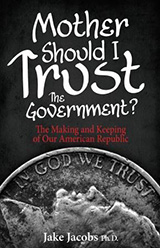 My book is designed to be a simple explanation of our Founders vision of a republican form of government where the people and the States were to be sovereign while stressing that the Federal government was to have only a few, very few, limited and explicitly listed enumerated powers given to them by the people. It will also be an expose of stories of where the Federal and at times State governments have abused their designated powers and violated the God given sovereignty of life and liberty for American citizens.

Why the title MOTHER SHOULD I TRUST THE GOVERNMENT? I remember as a kid in the 1960's and 1970's asking my mother all kinds of questions about life, love, God, sex, music, movies, World War II and the government. The Sixties as you know was a turbulent time in the world of government as there were Vietnam War protests, Civil Rights demonstrations, Socialist and Communists radicals like Barack Obama's buddies Bill Ayers and Bernadine Dohrn calling for Revolution in the streets as they bombed various government facilities. My mother and I had many great discussions on and a sundry of issues as we still do today.

While she is my biggest advocate she also once and awhile will give me gentle advice or critique my work. She did not like the title of my last book MOBOCRACY or that is was in hard cover. She asked that I show her the rough draft cover of the book you are presently reading. My lovely mother is 89 years old and unfortunately not in the best of health with very bad vision and lives in a Nursing Home.

I made a copy of the book cover with the title and printed it in big letters and put it in a stand up plastic holder and placed it on a table next to her chair without telling her it was the book cover. She looked at the cover title MOTHER SHOULD I TRUST THE GOVERNMENT? And thinking I was asking her a question she simply looked at me and said, "**** No!" When I told her it was the rough draft cover of my new book we both laughed so hard it hurt. Whether it is our Founding Fathers or my lovely Mother the bottom line response is almost always: "**** No!"

Notice I said "almost always" not always. It must be stressed over and over again that our Founding Fathers were NOT anarchists who advocated no government in America. While anarchists may rightfully have a profound distrust of all government their utopic vision of a world without government is not only naïve and sophomoric it does not deal with the reality of the necessity that government is needed in society to prevent chaos and mob rule.

Some form of "government" has been a part of man's existence since the beginning of time. The zillion-dollar question of all time for those who cherish life and liberty is:

How much government is necessary to preserve life and liberty?

Political philosophers, historians, tyrants, despots, statesmen, politicians, have articulated and debated various forms of government throughout history usually leaving out the self evident truth that all men are created equal by God and given the precious gift of life and liberty free from government control. The genius of our Founders is that after centuries of searching for the answer to the government question their answer was our wonderful Republic under God!