Jake Jacobs
Mother, should I trust We The People?

January 9, 2016
I am not an anarchist & neither were our Founding Fathers. Overall they did not Trust government, BUT they did create a wonderful Constitutional Federal Republic under God.

By that I mean they believed passionately in the rule of law, republicanism or limited enumerated government, a federal system of the division of powers to protect the people from government harm and a FAITH that believed, to quote Benjamin Franklin at the Constitutional Convention, "that God governs in the affairs of men."

Our Founders rightfully defined Liberty in 1776 as "Freedom from Government harm." In 2016 Liberty has been redefined by many as "What stuff can the government get for me?" Who are the many? The many are "we the people" of the United States. 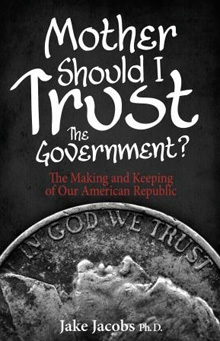 As much as many of us ask, "Mother, Should I Trust the Government?", knowing the answer is not in the affirmative, we must also ask the question,

"Mother, Should I Trust We The People?"

Sadly the answer is NO!

Many of the century old cultural and politcal goals of the progressives, socialists, Fabians, Marxists, and Frankfurt School advocates have come to fruition as they have won the textbooks, classrooms, churches, media centers, Hollywood, Wall Street etc. etc. etc. thus indoctrinating the people with an anti-liberty, anti-republican, anti-Christian Worldview.

We The People have forgotten the righteous roots given to us by our Creator and fought for by our forefathers. We the people have turned to The STATE, to the Federal Government to Save Us.... from the cradle to the grave.

When President Washington stated passionately the need for our youth to be properly educated he asked the following important questions:

"A primary object should be the education of our youth in the science of government. In a republic, what species of knowledge can be equally important? And what duty more pressing than communicating it to those who are to be the future guardians of the liberties of the country?"

President Washington knew what our Republic's lifeblood would be. In the following Washington quote he also understood the habits necessary for America to survive.

"Of all the dispositions and habits which lead to political prosperity, religion and morality are indispensable supports. In vain would that man claim tribute to patriotism who should labor to subvert these great pillars of human happiness – these firmest props of the duties of men and citizens. . . . reason and experience both forbid us to expect that national morality can prevail in exclusion of religious principles."

Far too many Americans today have habits and dispositions that have inverted and perverted the authentic Liberty and Freedom our Founders fought for. Today far too many Americans call for the redistribution of wealth, and for free stuff by the harmful arm of the Federal government. In the name of "Social Justice and Engineering" and "Equality" for the so called "less fortunate," the Federal government must immorally coerce and forcefully take the property and the fruits of the labor of millions of hard working Americans.

As DEBT and spending is in the tens of TRILLIONS of dollars, the Federal government along with we the people are complicit in the robbery of American prosperity, social mobility and economic stability. Not only are we headed for financial bankruptcy in America ....sadly the immoral bankruptcy of millions of "we the people" of the United States leads our Republic to its demise.....

We the people need to repent, pray and get involved in the politcal process of electing righteous leaders who understand the need for individual responsibility, self-reliance and our Republic's roots and limited government ways.

I am chief among sinners and I know that I need God's grace 24/7/365. My heart needs to be reminded and awakened daily to the reality of my Creator as the source of my life and liberty....in Him I move and breath and have my being...in Him, America moves, breathes, has liberty and prosperity!

We desperately need a Third Great Awakening in the land......George Washington said it best when he spoke to future generations about the preservation of the sacred fire of LIBERTY:

"The preservation of the sacred fire of liberty, and the destiny of the republican model of government, are justly considered as deeply, perhaps as finally staked, on the experiment entrusted to the hands of the American people."

Below are but a few words of wisdom from our Founding Father's or Presidents on education and morality:

"Only a virtuous people are capable of freedom. As nations become more corrupt and vicious, they have more need of masters."

"Religion, morality and knowledge, being necessary to good government and the happiness of mankind, schools and the means of education shall be forever encouraged."

"Rendering thanks to my Creator for my existence and station among His works, for my birth in a country enlightened by the Gospel and enjoying freedom, and for all His other kindnesses, to Him I resign myself, humbly confiding in His goodness and in His mercy through Jesus Christ for the events of eternity.

[Governments] could not give the rights essential to happiness... We claim them from a higher source: from the King of kings, and Lord of all the earth. " John Dickinson... SIGNER OF THE CONSTITUTION; GOVERNOR OF PENNSYLVANIA; GOVERNOR OF DELAWARE; GENERAL IN THE AMERICAN REVOLUTION 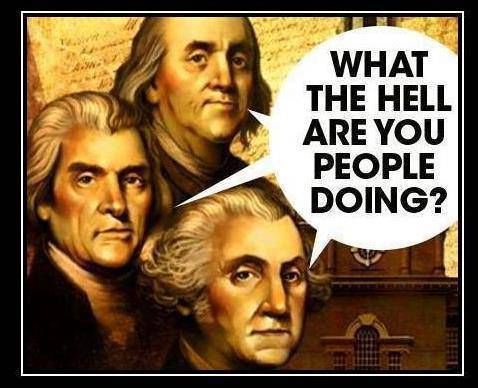