December 14, 2017
Now that we are in full Holiday Season mode, beware of the notorious FFRF and their WAR on Christmas, Christ, and the Judeo-Christian foundation of our Nation-our wonderful Constitutional Republic under God. 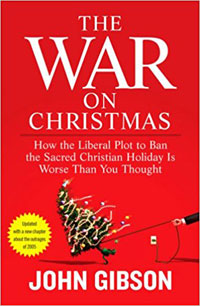 FFRF or the "Freedom From Religion Foundation" out of Madison, Wisconsin, declares on their website that their purpose is to "promote the constitutional principle of separation of state and church, and to educate the public on matters relating to nontheism." They spent millions of dollars every year paying legal fees contesting our Christian heritage in various government institutions from removing prayer in public schools, to removing Ten Commandment monuments from public lands. They also love to disseminate hundreds of billboard advertisements about the evil nature of Christ, Christianity and that our Founders were NOT Christian and that our Republic was not established under God.

The problem with the FFRF and their "Apostles of Atheism" is that they have to lie over and over again to achieved their stated goals! They take kernels or snippet's of truth out of context, creating a pre-text that is a false text thus ultimately designing a bogus narrative about the Christian worldview of our Presidents and the founding of our GREAT Republic under GOD.

Let me give you a few examples related to our Presidents. (Next week I will show how they lie about our Founders) They love to display a billboard with a quote by President John F. Kennedy where he says, "I believe in an America where the separation of church and state is absolute." Through their lying propaganda billboards FFRF wants Americans to believe that President Kennedy believed in a strict and high wall of separation of church and state. Nothing could be further from the truth.

The public Democrat President Kennedy invoked God and our Judeo-Christian heritage all the time. One classic example is in his classic 1961, inaugural address when in dealing with the militant atheism of the Soviet Union, JFK declares, reflecting Thomas Jefferson's words in the Declaration of Independence, that "The rights of man come not from the generosity of the State. But from the hand of God."

JFK was sounding very much like the Democrat President Harry S Truman who in his 1948, inaugural address dealing with the militant atheism of Communist butcher Joseph Stalin, declared to the world, "We believe that all men are equal because they are created in the image of God." Our public President Harry S Truman was quoting from the great book of Genesis 1:26, where Moses tells us that man is wonderfully made in the "Imago dei" or the "image of God."

The FFRF loves to quote Republican President Ronald Reagan out of context to advance their atheistic bogus, balderdash-blarney. In one of their Reagan billboards they have him say out of context, "we establish no religion in this country...church and state are, and must remain, separate."

That quote of President Reagan comes from his October 26, 1984,speech to the Jewish Congregation of Temple Hillel, in Valley Stream, New York. Just like President Washington's letter to the Jewish Congregation of Newport, Rhode Island in 1790, President Reagan was reinforcing the first amendment right of non-Christians to worship freely. In both Washington's Letter and Reagan's speech they stressed our common Judeo-Christian traditions and called upon the God of Israel to Bless America. And of course the FFRF very conveniently likes to forget that President Reagan love to say over and over again, "If we ever forget that we are One Nation under God, then we will be a nation gone under."

My fellow Americans during this Christian holiday season let us thank the God of Israel for our abundant blessings, and let us teach the truth of our One Nation under God, so our children and our citizens are not fooled by the lies of organizations like the Freedom From Religion Foundation.

God Bless and always remember the truth shall set your free.