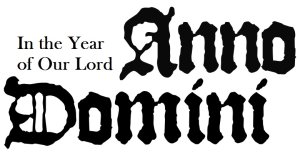 As we approach the New Year, 2018 A.D. let us reflect upon the A.D. that we put after the years on the calendar and why there is a cultural and political war to deny that A.D. as the foundation of our wonderful Republic under God.

In my classroom when I write down a year I purposely put A.D. at the end. Most of my students throughout my 30 years of teaching have mistakenly believed that A.D. means "After Death" or after the death of Jesus Christ. Actually A.D. stands for anno Domini which is Medieval Latin and means "in the year of the Lord." Anno Domini is the shorten form of the original phrase "anno Domini nostri Jesu Christi," which translates to "in the year of our Lord Jesus Christ."

This dating system was devised in 525 A.D. by Dionysius, a 6th-century Christian monk, and was used to number the years of both the Gregorian and the Christianized Julian calendars. A.D. is essentially a declaration by Western-Christian Civilization to the world that Jesus Christ, the Son of God is LORD or God of creation and time-space reality.

This is wonderfully illustrated in our Republic's Constitution where in Article VII it states, "done in Convention by the unanimous consent of the States present the Seventeenth Day of September in the Year of our Lord one thousand seven hundred and Eighty seven." Our brilliant Christian Founding Fathers, as they concluded the rule book of our Constitutional Republic acknowledged Jesus Christ as LORD or God over our Nation.

The reality of America's Christian origin and foundation of our Nation drives old and new atheists alike crazy!

Much of this "craziness" derives from the influence of the bloody-atheistic anti-Christian French Revolution. French revolutionary militant atheists in an attempt to destroy the biblical 7 day week outlawed calendars that reflected the book of Genesis' 7 day week. French time from 1792 to 1805 was based on a 10 day week of 10 months and 10 hours a day. There atheistic anti Christian calendar was a dismal failure.

These Anti-Christian French revolutionaries also created the "Temple of Reason" where man's mind and reasoning skills where worshiped as the ultimate deity, a man centered "god" that would deny and defy the Biblical God of Abraham, Isaac and Jacob. Through "Reason" they reasoned that man would eventually solve all of mankind's problems and usher in Utopia, or heaven on earth without God.

These bizarre French revolutionary anti-Christian atheistic ideas profoundly influenced what I call "old atheists" from Karl Marx, Vladimir Lenin and Joseph Stalin to Nikita Khrushchev. These "apostles of atheism" believed, taught and fought for what they called "Scientific Socialism" a BIG-Brother STATE-centered socialism dedicated to destroying Christianity and our limited government-Republic under God. Soviet Premier Khrushchev went so far as to declare in 1961 that Soviet Socialism would "usher in Utopia by 1980, creating a world without war or want." How silly and destructive there so-called "scientific socialism" was and is.

The American Revolution was predicated upon the exact opposite of the bloody-militant-atheistic French,Russian,Chinese, Cuban, Korean Socialist revolutions . Our Revolution of 1776 declared that our life and our liberty derives from our Creator, the Supreme Judge of the World. While our wise Founders did not deny the importance of "Reason" Rational thinking and using our minds well, our Founders always acknowledged that man's mind, man's reason was a gift from God Almighty-Jesus Christ and should be used to advance life, liberty, equality and justice for all.

So as we enter into 2018 A.D. Anno Domini-the year of our Lord Jesus Christ, let us be thankful for the abundant blessings in our land and in our homes and let us continue to ask Jesus for guidance upon our lives everyday this coming up year.

Next week will will cover why the "New Atheists" so disdain A.D. Anno Domini in America, until then, this is Jake Jacobs, may God Bless you and may you always remember the truth shall set you free!

Here is my ONE NATION link to this topic: https://www.youtube.com/watch?v=_NtlgGfp6aY&t=163s