Jake Jacobs
Age of Reason vs. Age of Revelation 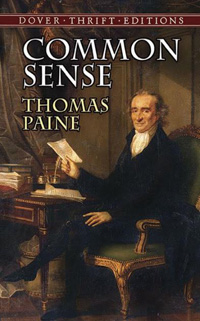 If you've ever read "FreedomProjectAcademy's" purpose statement it states:

"FreedomProjectAcdemy is committed to changing culture and restoring the nation through Classical education, teaching Judeo-Christian values, and preparing the next generation of patriot leaders."

You'll notice they say "teaching Judeo-Christian values" which is another say of saying the biblical, scriptural values that derive from the Old and New Testaments which attest to the wonderful mega narrative story of YAHWEH-God and His Son Jesus. Over and over again in the Scriptures the one true and only God is called "the God of Abraham, Isaac and Jacob and the God of Israel."

While old and new atheists alike throughout the ages have said they hates all gods, it is ultimately the God of the Scriptures, the God of Israel that they attack and attempt to disavow above all others in their polemics. This brings me a favorite guru of many of the apostles of atheism, Englishman Thomas Paine. Thomas Paine's Common Sense published January 10th, 1776 is considered a classic work that profoundly influenced American patriots in 1776 to fight for life and liberty against the tyrannical King George III.

Although not a Christian but a deist Paine uses Christian language and argumentation in his polemical work as he recognizes that the vast majority of his audience in America are Bible believing Christians. As Paine discusses the corruption of the King of England he asked this question in Common Sense:

"But where, say some, is the king of America? I tell you, friend, he reigns above, and doth not make havoc of mankind like the royal brute of Britain.....let it be brought forth placed on the divine law, the word of God...in America the law is king." The "1776 Thomas Paine" understood that the American paradigm and argument for independence from Britain was from divine law, God's law as revealed to Israel and the nations and that He was the true ultimate sovereign in the colonies in 1776.

Unfortunately by 1794, with the publication of his "The Age of Reason; Being an Investigation of True and Fabulous Theology" the Deist Thomas Paine had in totality rejected Christianity, Jesus Christ and the revelation of the Scriptures by YAHWEH-God to the Hebrew prophets and Jewish Apostles.

While Paine did properly point out the hypocrisy of those who used Christianity to abuse, hurt and control people, Paine's primary argument in his Age of Reason was to declare the Bible bunk, the Hebrew prophets liars, the Apostles delusional, the Old and New Testaments perverse and Jesus Christ a myth.

While Thomas Paine said that he did believe in God, his "God" was the God of reason not the God of revelation-the God of the Bible. This is why Atheists yesterday and today love Paine's Age of Reason because in it he attacks very explicitly and specifically the God of Revelation-YAHWEH-God, the God of the Scriptures.

When the Age of Reason hit the American market many of America's Founding Fathers were infuriated with Paine's attack on our Republic's God. John Adams called him a scoundrel, Samuel Adams called his ideas repugnant, Benjamin Rush called them absurd and impious, Charles Carroll declared they were blasphemous writings against the Christian religion, George Washington was sadden by Paine's vitriol and even the theist Benjamin Franklin warned him of the negative consequences of attacking in America the concept of a providential God.

Probably the most prolific response to Thomas Paine's Age of Reason was the founding father Elias Boudinot's Age of Revelation where he beautifully defends Christ, authentic Christianity and the revelation of the God of Israel to the Hebrew prophets and Jewish Apostles in the Holy Scriptures

King Solomon, the King of Israel told us in the Bible that there was nothing new under the sun over 3,000 years ago. Well, in 2018 A.D. "the Year of our LORD-Jesus Christ" there is still nothing new under the sun as we still have those who would deny the Judeo-Christian revelation of YAHWEH-God in His Holy Word, the Bible. That wonderful book is THE book that points us to Jesus Christ for as the Apostle John declares in John 1:1:

That is the Rock of our Salvation and to quote President Andrew, that isthe rock on which our Republic rests.

You can watch Dr. Jacobs ONE NATION presentation here: https://www.youtube.com/watch?v=XTO2bNHSJj8#action=share