June 18, 2016
In the denouement of the tragic gay massacre in Orlando, a friend sent me three questions that he said were provoked by Dennis Prager's observation of an enormous gay liberation flag in the breeze over our embassy in Rome. http://townhall.com/columnists/dennisprager/2016/06/14/what-if-the-orlando-murderer-were-a-christian-n2177823 He wanted to know, first, if our Roman embassy sports any other protected minority banners. Secondly, he asked if our embassies in Muslim countries, where they execute homosexuals as official state policy, were also flying the rainbow colors. And finally, he asked this: "Had a Muslim targeted and murdered scores of Christians, would any American embassy anywhere in the world be draped in a flag depicting the Christian cross? In fact, in light of the one and only ongoing genocide in the world, that of Christians in the Middle East by certain Muslim groups, why aren't American embassies draped with a flag bearing a cross?"

Good questions, I replied. I'll take a shot. But I would also want to know just how our embassy happened to have a rainbow banner on hand to fly beside the stars and stripes.

In the novel 1984, the existential challenge Winston must face is to resist Big Brother's insistence that 2 + 2 = 5. That is where the line has been drawn because the apotheosis of state power consists in its ability to superimpose its own systematic delusions upon our foundational reality, causing us to lose sight of the latter in the shadow of a purposeful fiction created by those in power. There were two elements to this coercion. The first was a form of mass propaganda that resulted in what we today would call political correctness. In other words, it was the implementation of taboos which spread unconsciously across the whole society. The second element of coercion was terror, the infliction of pain and dread in those selected cases where the taboos were not sufficiently effective. The crime for which Winston was subjected to terror was his refusal to internalize the prescribed taboos, and worse still his studied resistance to those taboos. For those who have forgotten the plot, in defiance of Big Brother (the state) and in contravention of his official duty to destroy them, Winston has saved scraps of old newspaper and magazine articles because they confirmed his recollections of reality.

The point of the terror was this: If Winston could be made to believe that 2 + 2 = 5, then he could also be made to believe that his evidence of reality did not mean what he conceived it to mean. His surrender to that lie would also mean his alienation from every other human being, because no truly meaningful relationship can be built upon a false reality – even if it is a widely shared false reality. And so Winston's ability to love died along with his ability to reason. Our present regime in Washington is moving inexorably in the direction of Big Brother. If you believe that Bruce Jenner is now a woman, if you believe that Elizabeth Warren, because she has "high cheek bones," is the first "woman of color" to graduate from Harvard Law School, or if you believe that it was a gun, and not a hate filled Muslim militant, who killed those four or five dozen homosexuals last week at a gay bar in Florida, then you might as well accept that 2 + 2 = 5. Because to believe in those bits of palpable rubbish requires the swallowing of delusions so grand that gulping a few flawed mathematical equations will hardly make any difference to your digestion.

Men with artificially reduced levels of testosterone will, as of yesterday, be allowed to compete as women in all international Olympic events. 20 years ago, feminists were frantically engaged in the promotion of Title 9, with the objective of creating more athletic opportunities for actual women. In their zeal for equality, they forced the elimination of countless men's athletic programs in colleges and universities throughout the land. But now, without so much as a curtsy or a whimper, they have consented to allow pretend women – "women" with male genitalia, women who do not menstruate or lactate, women with enormous upper body mass – to compete against actual women, as if they too were real women in spite of their indelible "Y" chromosomes. In other words, the trans-gender wing of the homosexual movement has now run head-on into the radical feminist movement. While the latter promotes the obstinate delusion that there are no real and meaningful differences between men and women, the former insists that every form of sexual deviancy must be recognized as normal, approved by all of us, and accommodated even in its most manifest absurdities. So what are we to make of this new accommodation the gays and the feminists have worked out? If a transgendered "female" wins the women's gold medal in boxing, will that be a victory for women, for gays, or for outright insanity?

Meanwhile, these same feminists who have for so long condemned the American male as "sexist and homophobic" have nothing to say against the sadistic treatment of women and homosexuals by Islam. But perhaps they will now rise up in indignation against the mass murder of homosexuals on our own soil by a Muslim "extremist." Don't hold your breath! Already that slaughter is being blamed on the "Christian right." And long after everyone learned that the perp had registered his allegiance to ISIS via a 911 call, our bull goose looney Barack Obama was still insisting that "we have no definitive assessment on the motivation." One byproduct of the surrender of critical thinking is a mechanism called "double-think," which Orwell defined as the ability to hold two irreconcilable ideas in one's mind at the same time – and to fervently believe in both of them. In spite of all evidence, Islam is a "religion of peace." And, ISIS now has 8,000 Americans on an official hit list. In reaction to the massacre in Orlando, Barney Frank has just endorsed Donald Trump's proposal to restrict Muslim Immigration. I suspect that makes the brave (and gay) former Congressman ISIS target number 8,001.

Delusions of the order we are now witnessing go back a very long time in our society, and they take a multitude of forms. Let's explore just one example. Take a look at this top ten list of living American painters. https://news.artnet.com/market/artnet-newss-top-10-expensive-living-american-artists-2015-323871 Wouldn't these look marvelous on the ceiling of the Sistine Chapel? When did the Western World come to regard such infantile doodlings as inspirational art? There is a reason that most successful art forgers copy abstract works. Not only are blotches and spatters easy to replicate, they are nearly impossible to detect because they require no unique talent or signature style. In fact it is not uncommon to find authentic abstract masterpieces hung upside down, and when that happens no one seems to notice – or care.

Among the highest priced American works, selling for hundreds of millions, are the drippings of Jackson Pollack and the comic book silk screens – machine prints, in other words – of Andy Warhol and his imitators. (Do you have a Campbell's soup can on your wall?) Art forgers are now celebrities, featured in famous galleries the day they leave prison and billed as the "Robin Hoods of art." http://www.dw.com/en/how-beltracchi-the-worlds-most-famous-art-forger-plays-with-the-market/a-18436266 I'm sure you will not be astonished to learn that hordes of breathless aficionados are queuing up to have their portraits painted by these cons. Check out the wildly popular forgeries by immigrant copiest Qian, now cooling his heels at a resort somewhere in China. https://www.google.com/search?q=qian+forgeries+images&biw=1476&bih=723&tbm=isch&tbo=u&source=univ&sa=X&ved=0ahUKEwjYsMbm0KXNAhWm5oMKHUSUDYsQsAQIGw The prestigious Knoedler Gallery in New York sold $80 million worth of Qian's never-before-seen works, hocking them as authentic treasures from "private collections." Knoedler offloaded this ensemble of graphic genius to gullible New York fat cats eager to buy a delusion. Can I sell you one? Heaven knows I could use the money. Perhaps some elephant dung on a picture of the Virgin Mary? Of course not! That enchanting bit of originality has already been marketed. 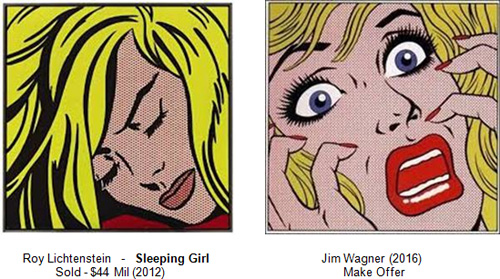 The surrender of reality, for most of us, is not the once-and-for-all proposition that Orwell's Winston faced. Rather, it is a day-to-day capitulation to nonsense that we find it too uncomfortable or too much trouble to resist. It is the studied refusal to think critically, because when truth becomes a revolutionary act then to think critically is to think dangerously. It is a joining of the herd, now in full stampede toward lunacy. It is an act not so much of failed judgment, as we may be tempted to imagine, but of moral cowardice for which, if we once dare to recognize it, we are bound to feel ashamed. But do not be deceived. The failure of our practical judgment is an unfailing concomitant to the surrender of our moral judgment. "... they refused the love of the truth that would have saved them. For this reason, God will send them a powerful delusion so that they will believe the lie, in order that judgment will come upon all who have disbelieved the truth and delighted in wickedness...." (2 Thessalonians, 2: 11-12)

So send us some more Islamic "refugees," like the Boston Bombers or the Afghan parents of Omar Mateen, and we will dutifully pretend that their allegiance to Islam offers us no portent of future slaughter. Because what the heck! Diversity is our strength! Right? It takes all kinds, doesn't it? After all, who am I to judge what is good or bad, true or false, sense or nonsense!