August 26, 2013
More and more people are beginning to call for the impeachment and removal of the civil officers of the U.S. government who are responsible for, or collaborating with, the Obama faction's ongoing assault on the U.S. Constitution.

A group of black Republicans just published a bill of particulars detailing the abuses they believe warrant the impeachment and removal of the Obama government and its collaborators. Others have decried Obama's dictatorial usurpation of Congress' constitutionally exclusive legislative power, as he neglects to faithfully execute existing U.S. immigration laws against several hundreds of thousands of people whose unlawful entry into the United States degrades the physical security and political sovereignty of the nation. Even a frequently shortsighted mouth organ of the elitist faction like George Will feels obliged to notice the almost casual assumption of tyrannical power whereby Obama purported to create a bubble of elitist privileges, meant to keep people on Capitol Hill from being sucked into the brewing maelstrom of Obamacare.

While the media circus invites Americans to focus on the mask of a clown, Obama is blithely assuming the visage of a Third-World despot. He works assiduously, in defiance of nearly every constitutional duty and constraint, to assure that America's strength and status in the world are degraded to suit that assumption. Tragically for America, while Obama disarms the nation against its actual and potential adversaries, he is moving to consolidate every power that can be used to make war on the rights and sovereignty of the American people. This has dismayed, though perhaps not detoxicated, even some of the Democrats whose political stupefaction helped to put Obama in a position to wield power he is now so obviously determined to abuse. 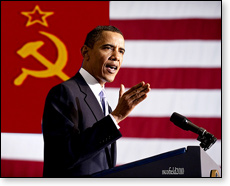 Thanks to the collusion and/or incompetence of his putative opponents in the GOP, Obama's ideologically-driven and purposeful destruction of America's constitutional self-government moves steadily forward without let or hindrance. I have no doubt that a solid majority of Americans oppose replacing the U.S. Constitution with a Presidential Party dictatorship. I have no doubt that a significant number of them, particularly those who served in the military and remain faithful to the oath they swore to defend the Constitution, would be willing to risk their lives rather than live quietly under such a dictatorship.

But if it comes to the sort of civil conflict that is now building in Egypt, the American way of life will already have failed, and in precisely the manner envisaged by the elitist faction manipulators Obama represents. America's founders framed the Constitution to avoid the dreary cycle that runs from the sullen acceptance of tyranny, through rising anger against its abuses, to the outbreak of mobocratic disorder, and back again to some form of tyranny. The whole point of dividing the power of government and delineating clear procedures for its legitimate exercise is to allow people to recognize and act against abuses before such things are so deeply entrenched that nothing short of forceful resistance can check them.

Instead of waiting until the swollen boil of tyranny bursts the remaining bonds of civil politics, America's constitutional government offers opportunities for citizens to identify and thwart the officers of government whose actions flow with the pus of lawless ambition, removing them from government by the political and constitutional method that begins with impeachment, rather than the mobocratic passions that end in uncivil repression or misnamed civil war.

Cutting off the source

As the focus of the strategic effort to overthrow America's constitutional self-government, the Obama faction has orchestrated a general assault against its economic, moral, and institutional supports. From Obamacare to amnesty for illegal immigrants; from gay marriage to the coercively indoctrinated normalization of homosexuality; from the legal imposition of cowardice by forcing people to flee rather than defend their lives and property, to the relentless push to destroy the Second Amendment's prohibition against disarming their courage – Obama and the power-mad forces he represents are thrusting their bayonets into the soft underbelly of America's way of life. 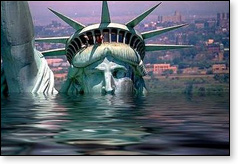 Americans anxious to fight back are being invited to give their attention, and to throw their energy and resources, into a confusing welter of battles. All of them seem critically important because they involve defending assaults against principles, rights, and institutions that are vital to the survival of our liberty. But this effort to fight off every attack actually dissolves and dissipates the force of liberty's resistance against the strategic threat, allowing it to proceed almost without opposition. The assault against liberty spreads like a rising flood, threatening and overwhelming objectives all around a broad front. The resistance to liberty thus exhausts itself piecemeal, never gathering its strength to identify and achieve the one objective that would cut off the flood at its source, by diverting the flow of power that presently gives the flood its destructive force.

The Obama faction and its collaborators are not just fighting battles in an unconstitutional fashion. They are waging all-out political war against the Constitution itself. Their greatest advantage in that war is that the supposed focal point of opposition to their attacks – the GOP – cannot or will not acknowledge that the war is under way and has in fact reached its decisive stage. Instead, GOP leaders pay just enough lip service to the battles to prevent the forces of liberty from uniting in response to the strategic threat.

Americans who are sincerely determined to save their nation's decent liberty must find the independence and will to look beyond the GOP sham of false partisan opposition, and unite in a strategic purpose that secures that paramount goal. They must find the vision to look beyond the mock combats of corrupting Republican/Democrat politics, and see the approaching denouement of liberty's destruction. They must focus faith, courage, and political will on reasserting the national sovereignty the Constitution places within their reach, but which they can truly retain and exercise only if and when they accept their individual and collective responsibility to God, by wise choice to elect, or through their representatives to remove, officers of that government which has been ordained and established by the Constitution. 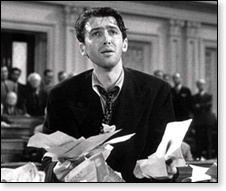 Against the media and money powers, and the political leaders who serve and depend on them, Americans must reassert their constitutional power as a people. Initiating impeachment when necessary is the only way to do so. But it depends on the people's willingness to make their votes in the 2014 congressional elections turn on one prerequisite above all: Is a candidate for or against impeaching and removing from the U.S. government all the civil officers who have engaged in or collaborated with the Obama faction's assault against the U.S. Constitution, and the rights, character, and liberty of the American people?

If you understand this imperative for strategic success in winning the political war for America's liberty, join with those who are working to recruit its united strength. Read the challenge here or here. Then let your yes be yes to the perpetuation of liberty.