Tabitha Korol
A choice of one

August 21, 2017
Chautauqua Institution, originally a cultural center, is now a disseminator of Islamic messaging to reach out to uninformed Christians and Jews programmed to accept multiculturalism. Featured speaker Shadi Hamid, a senior fellow at the Brookings Institution's Project on US Relations with the Islamic Center for Middle East Policy, is part of the worldwide movement financed by oil money. 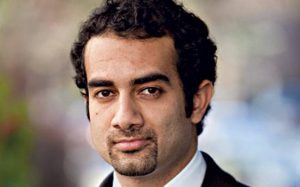 Shadi Hamid of Islamic Center for Middle East Policy
On August 9, he spoke of American anxiety, incongruously blaming occasions such as buying jam at the grocer's, where, alas, so many choices will cause regret that he hasn't purchased the best option. He sees no beauty in the many fruits, flavors or quality, or why, if one manufacturer makes jams and employs and pays a decent wage to improve life for himself and his neighbors, another cannot do the same in another locality. Why must ingenuity be stifled? 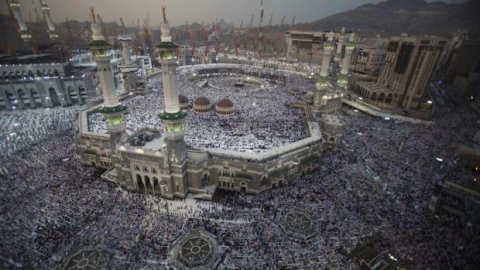 Their vision is this in America
Blind to possibilities, Hamid is instead guided by Islamic rules, allowing only one jam, or having one of his housebound wives make it. He prefers that leadership dictate one's lifestyle by force; create one nation, the Ummah; one law, sharia; and one goal, world domination.

Where democratic nations have excelled in science and technology, medical advances, improvements in agriculture and water technology so that humanity may flourish, the Islamic culture is based on shame and honor, and a high illiteracy rate to impede progress. Their greatness will come when all vestiges of advanced societies are destroyed.

He described the universal condition as a "struggle," but he meant "jihad," as struggle is rarely part of the Western vernacular. Hamid is a moderate, unweaponed jihadi, hoping to conquer by message, to convince his conditioned audience that his culture is superior, and particularly to reach those who have chosen the altar of liberalism over Judaism and Christianity, from which derived those freedoms, morals and ethics imperative to happiness and peace. Judaism and Christianity do not struggle for meaning; struggle is a proclivity of all forms of fascism, because authoritarianism provides no contentment.

The divisiveness that Hamid sees in America comes not from democracy, but from those who seek its destruction. Our laws provide respect for human rights, religious freedom, worker rights, a secure peace by combating international terrorism, stability, prosperity, open markets and economic development, improvement in the global environment and human health, and the enemy hopes to use our laws to defeat us. Arab-American author Nonie Darwish penned a warning, "America must protect its democracy, culture, and sovereignty from nations with aspirations of conquering us from within."

We need only look to the Islamic Middle East to see Hamid's "rich tapestry of traditions and contentment" – the rampant violence that has now created a "lost generation" of Middle East men – 30,000 suicides, 35,000 deaths from interpersonal violence, a ten-fold increase of fatalities from HIV/AIDS in 25 years (a side effect of FGM on women), and 144,000 deaths from wars in 22 Islamic nations.

Other twisted threads of this vintage brocade constitute the sharp increase in non-communicable diseases in the Eastern Mediterranean region – depression, anxiety, bipolar disorder, schizophrenia. The death toll from Islamic terrorists since 9/11, at 31,546 (to date), is born of, but also affects, the families from which these terrorists are woven.

The speaker educated his audience that Mohammed, a prophet, was also theologian, politician, head of state, and state builder, but his list was incomplete. He was also a warmonger, conqueror, murderer, beheader, enslaver, rapist and pedophile. Hamid imperiously denounced the Bible as not being the entire word of G-d, but tells us that the Koran is – of a god who wreaks pain and havoc on his children.

While also insinuating that the Hebrew Scriptures are superseded by the Christian Scriptures (although the former provides the foundational doctrines for the latter), he added that the Koran supersedes the Christian. In a few words, he has delegitimized the basis for all Western civilization, slighting the most compassionate laws by which humans live in comparative harmony.

Interestingly, Hamid acknowledged that Islam is also a political doctrine. He cannot distinguish the role of religion from state because Islam is a theocracy, and their deity, Allah, the sole source from which all authority is derived.

The rule of conquest is carried out by both armed terrorists and self-styled moderates working within the framework of the invaded country to insinuate their laws in increments, gradually and differently, according to the workings host culture.

The speaker closed with the usual feigned victimization, a plea for "peaceful disagreement if there must be disagreement." This is taqiyyah, holy deception, "a strategy to make Islam dominant; a persistent tactic of the skilled to deceive the non-Muslims and downplay the threat of Islam." Yet the reality is that while mosques are being erected throughout the US, Christians and Jews are not demanding churches and synagogues in Saudi Arabia. While American school cafeterias are accommodating Moslem students with the removal of pork, Jews are not demanding kosher foods anywhere. While our textbooks have been revised to contain whitewashed Islam, Americans are being robbed of their own history.

Of all the ethnic groups that have come to America, Moslems are the only ones who require accommodation, and createneighborhoods and school areas that exclude others. His is the group that will use our laws to enact theirs for dominion.

Dear reader, his was not an extemporaneous speech by a neophyte. Hamid's words were judiciously chosen, with a lesson to be derived from his explicit example of achieving contentment from only one jar of jam. He cares not a whit about quality, flavor, or your preference; he wants only one choice of jam and one choice of religion – Islam. In 1400 years, Islam was unable to produce the quality and flavor of Western civilization, but if they could succeed in annihilating Western civilization, ahhh, then Islam would finally be the best.

This is civilizational jihad. This guest is one of many who comes to indoctrinate the uninformed in Chautauqua, that fewer choices mean fewer worries. Life is not made better, but infinitely simpler when you do as you're told, eat what you're given, and dare not complain. It is more than just a "Shadi" deal; it is bondage.