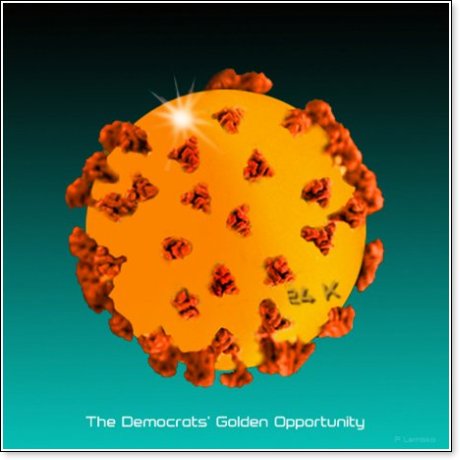 Americas response to the coronavirus pandemic has been unprecedented. The complete shutdown of our national economy is truly historic. Not since World War II have Americans experienced such widespread anxiety, unrest, and economic hardship. Its hard to imagine how anyone can find anything to cheer about, sifting through the debris field of 90,000 U.S. deaths, millions of lost jobs, and utter economic devastation.

Democrats, though, have found a way to see the bright side of things. After nearly three years of bitterness and frustration over the 2016 election, their hope has been restored. Its not because of some spiritual awakening or newfound optimism. Relying on sheer cunning and shrew planning, theyve created a golden opportunity. Like political alchemists, theyve devised a way to extract gold from the pain and suffering of fellow Americans.

And Nancy Pelosi was recently interviewed on MSNBC to discuss the Democrats response to the crisis. She said she was optimistic, adding, I see everything as an opportunity. The bigger the challenge the bigger the opportunity. In her view, COVID-19 is a $3 trillion opportunity. Thats the cost to taxpayers for the Democrat-pushed HEROES Act, ostensibly introduced to compensate Americans for loses attributed to the pandemic.

But more than one third of those funds would be used to bail out state and local governments that had recklessly spent themselves into debt long before COVID-19 appeared. The bill would also shield from deportation illegal aliens who happen to be working in essential fields and make them eligible for federal stimulus funds, funds that should be reserved for American citizens. It calls for the release of certain illegal immigrants from I.C.E. detention, and offers numerous other benefits for those here illegally. And though not calling for the progressive dream of free college, this bill, as originally written, would have forgiven up to $10,000 of student loans for each borrower. After recognizing the enormous cost, Democrats amended that provision, limiting the benefit to those in economic distress. Its clear Democrats are using COVID-19 as a ruse, a ploy to push for a cornucopia of progressive goals.

Several years ago, when Rahm Emanuel, Barack Obamas Chief of Staff, bluntly advised fellow Democrats to never let a good crisis go to waste, he was widely criticized. Then, it was considered tasteless and vulgar to encourage the callous exploitation of other peoples misery. Today, Democrats are openly, eagerly exploiting a crisis that impacts every American citizen.

And theres another reason why they seem to embrace this crisis. For nearly four years, President Trump has been the focus of their contempt. They now believe – they earnestly hope – that voters will hold the president responsible for the economic hardship left in the wake of this pandemic.

Given those circumstances, its clear why theyre in no hurry to get back to normal. How can anyone but their staunch supporters believe that public safety is their real concern? How can anyone believe they truly want to return to the free and prosperous America we all enjoyed just a few short months ago?

Those are the reasons they seem intent on prolonging this morass. They endlessly regurgitate the most dire medical predictions they can find. They tell us to expect a second wave if we reopen prematurely. They try to convince us that were dealing with something more akin to the black death, rather than a serious, highly contagious respiratory virus. They tell us its of such epic proportion that our Bill of Rights is no longer relevant.

Their devious ploy is exposed every time a progressive, tyrannical governor closes another church or gun-shop in the name of public safety, while allowing abortion clinics, liquor stores and marijuana shops to remain open. Its made apparent when they ruthlessly jail small business owners who are trying to earn an honest living, while prematurely releasing criminals from prison. And it becomes crystal clear every time they issue another arbitrary decree that tramples on our First Amendment rights.

But as Democrats continue to exploit their golden opportunity, rational, freedom-loving Americans understand that this is not the country our founders conceived.

Although Thomas Jefferson could not have foreseen COVID-19 some 240 years ago, he had some thoughts on government abuse of power. These words are attributed to him: If a law is unjust, a man is not only right to disobey it, he is obligated to do so. Frustrated American citizens are beginning to defy the unjust laws, the tyrannical decrees issued by exploitive politicians. Unless our constitutionally guaranteed freedoms are restored and our economy is unshackled soon, that number will likely explode, and no self-serving politician will be able to contain them.