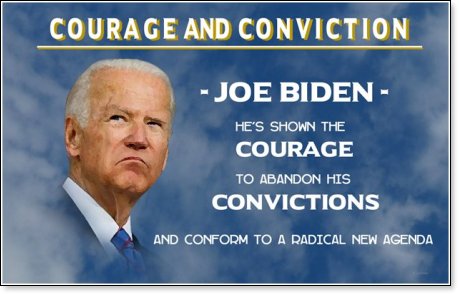 Joe Biden’s supporters have called him a man of courage.

The late John Lewis used those very words to describe him shortly after Biden jumped into the presidential race. Nancy Pelosi went a little further, calling Biden the “personification of hope and courage, values, authenticity, and integrity.” A lesser-known Democrat wrote an opinion piece in the Tennessean earlier this year, predicting that Biden’s “character and courage” would propel him into the White House. And another editorial written earlier this year refers to Biden as a man “guided by courage and deep faith.” That endorsement, written by his wife, should probably be taken with a grain of salt, just like all the others.

Most people agree that courage is one of the most important qualities of leadership. Some would say it’s the keystone. But there are different kinds of courage. How do we measure it in political terms?

Someone once said that “Courage is the commitment to begin without any guarantee of success.” It means putting fear of failure aside and following your core values and principles. More simply put, political courage means standing your ground while the lemmings are stampeding.

Courage, conviction, and commitment are all part of leadership, and Joe Biden’s amorphous political positions suggest that he’s never really stood for anything. Throughout his career, he’s managed to deftly adjust his convictions to mirror the current political climate.

In 2002, Biden, then chairman of the Senate Foreign Relations Committee, voted to support the war in Iraq. It wasn’t a particularly tough or courageous stance. A Gallup/CNN poll conducted a year later indicated that, even then, 72 percent of Americans still supported the war. As public support waned, so did Biden’s. Today, he casually dismisses that enormously consequential vote as a “mistake.”

We saw one of the most dramatic displays of Biden’s political weakness in his recent opposition to the Hyde Amendment, which, since 1976, has barred federal taxes from funding most abortion procedures. A long-time supporter of the ban, last year Biden announced he now opposes it, winning him the approval of his party and the pro-abortion activists.

In 1996, he voted for the Defense of Marriage Act. In 2012, during a Meet the Press interview, he said he was “absolutely comfortable” with gay marriage.

Some of his “convictions” have been much more short-lived. In May of last year, Biden completely dismissed the threat we faced from China, “China is going to eat our lunch? Come on, man…. They’re not bad folks, folks. But guess what? They’re not competition for us.” Just a few weeks later, as he attacked President Trump’s dealings with China, he issued these cautionary and contradictory remarks, "We are in a competition with China. We need to get tough with China. They are a serious challenge to us, and in some areas a real threat.”

Whether it’s abortion, desegregation, the border wall, immigration, or criminal justice, Joe Biden’s public record suggests that he’s not a leader at all, but a consummate follower.

His propensity to follow, in and of itself, isn’t his biggest problem. What he’s chosen to follow, though, could be his downfall. Lacking his own core beliefs, he’s decided to wholeheartedly embrace the radical socialist agenda of the Democrat Party, a party that has alienated itself from traditional American values.

It’s a party that no longer stands for national sovereignty and secure international borders, but encourages and accommodates illegal immigrants. And it no longer defends our police, but portrays them as racist and corrupt. Many in that party are trying to dismantle our police departments – even as they encourage the riots that are engulfing our major cities, while at the same time they favor disarming law-abiding citizens. Their vision of Utopia is an unarmed citizenry monitored by a national police agency. That wouldn’t be Utopia. It would be a breeding ground for future tyrants and dictators.

And their far-left ideology extends to so many other important issues. Once calling for safe, but rare abortions, Biden and his party now support the unlimited availability of unrestricted abortions, at any stage of pregnancy, funded by taxpayer dollars.

Those radical ideologies, which can only be described as antithetical to traditional American values, don’t pose a problem for committed Democrats. And Democrats don’t really care whether Biden is a man of courage or not, though they have to convince other voters that he can be a leader. It won’t work. Most Americans can see the real Joe Biden. They see a once-empty vessel now filled with the poison of leftist ideology.

And while his frequent gaffs and bizarre comments have caused many critics to begin questioning Biden’s cognitive abilities, his life-long lack of principle and convictions is already well established. Biden has spent his life running with the lemmings. That’s not courage, and it’s not leadership.