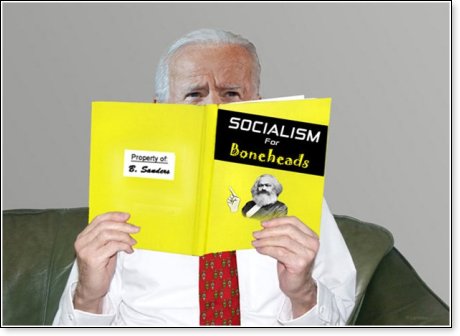 This is not Joe Biden’s first presidential run, nor is it his first encounter with character issues. During the campaign of 1987, Biden’s presidential ambitions were derailed after voters learned he had plagiarized a campaign speech. That led to the revelation that he had also plagiarized several pages of a paper while in law school. Back then, Biden knew that voters wouldn’t tolerate that kind of dishonesty in their president and he withdrew from the race.

As they say, the more things change, the more they stay the same. Today, Biden’s character is again under fire, but this time over a much more serious scandal – potentially the selling out of America for personal gain. But since he now represents all the eggs in the Democrats’ only basket, his supporters and their allies in the news media have no choice but to close their eyes to the overwhelming evidence of influence peddling. Joe is showing his appreciation by forging ahead with his campaign.

Throughout history, many good people have succumbed to the corrupting influence of politics. Some had a head start with dishonesty even before they entered the political arena. But this isn’t really about where Joe Biden might stand in the corruption spectrum.

It’s more about Biden’s amorphous core beliefs, his ability to become whatever he needs to be for short-term personal gain. He supported the Hyde Amendment when it was popular, and now opposes it. He was praising former Klansman Robert Byrd and opposing school bussing long before terms like “woke” and BLM became part of our vocabulary. Today he calls himself a crusader for racial justice. As vice president, he helped to divide the country along racial lines, once telling a black audience that Republicans would put them all back in chains. Recently, he inadvertently confirmed the obvious reason for that kind of divisive rhetoric, when he told an African-American radio host, “If you have a problem deciding whether you’re for me or Trump, you ain’t black.” Like most other Democrat politicians, he’s been exploiting the racial divide for political gain. Yet now he calls himself a uniter.

But what about the issue of socialism?

It’s undeniable that the Democrat Party has radically changed in recent years. It can be argued that Democrats have abandoned so many traditional American values and shifted so far to the left that they are becoming indistinguishable from socialists. These, for example, are some of the stated goals of the Socialist Party USA:

Even though many, if not most Democrats today proudly share those exact same goals, party leaders are careful to steer clear of the term “socialist.” President Trump addressed the issue head-on during the first presidential debate. He specifically challenged Biden on his party’s goal of socialized medicine. Biden, who wants to be perceived as a moderate, skirted around his party’s new direction. He responded, “The party is me. Right now, I am the Democratic Party.”

The question is not whether Democrats can provide the socialist dream of unlimited, free, quality healthcare for everyone through tax increases on the wealthy. The real question is whether Biden is again altering his core values to align with his party. Is he leading the party into moderation, or is he becoming what he needs to be for the continued support of an increasingly radical party?

Can we believe this political shape-shifter this time when he insists that he’s not a socialist?

Many in his party hope he’s lying. They want a socialist, in the same vein as Bernie Sanders. Other Democrats, blind to the radical changes in their party, choose to believe Biden. They see him simply as a moderate Democrat who can solve America’s problems and unite the country.

But most objective people, those outside the party, look at his deeply flawed character, his epic flip-flops, and his nebulous core-beliefs. They know he’s lying.

Democrat Party leaders know full well the people are not ready to accept a socialist government, so they hide from the label. But as the party continues trying to emulate this or that socialist country, it is walking away from traditional American values, and Joe Biden is doing the best he can to keep up with his party. He may not be a quick study, but he’s pliable and eager to learn.