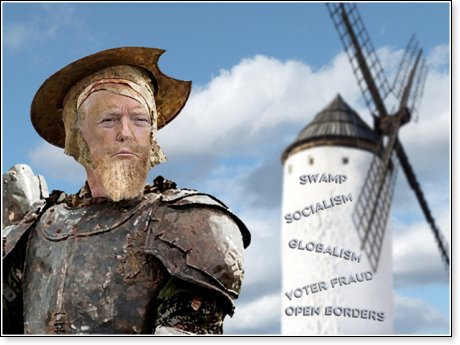 The blind hatred that consumes President Trumps enemies is reflected in their poisonous rhetoric, which long ago exceeded inflammatory. Its become utterly insane. Theyve labeled the president a white supremist, a racist, a fascist, a tyrant, and even a traitor. Theyve casually compared him to historically evil and despised despots, dictators, and mass murderers.

Rational, intelligent people see the absurdity in those repugnant comparisons and understand the division theyve caused. They know that Donald Trump, like all of us, may be flawed, but hes not a dictator, and hes not evil.

On the other hand, comparisons to conservative leaders by his supporters also fall short. Donald Trump lacks the genteel finesse of The Great Communicator, and his brand of conservativism is vastly different from Ronald Reagans. And though Trumps bulldog determination is somewhat reminiscent of Winston Churchill, he lacks Churchills discipline and eloquence.

There is, though, another well-known figure, a literary character, who has a great deal in common with President Trump. The classic novel Don Quixote de la Mancha was written more than 400 years ago, and most of us are familiar with the protagonist in the novel, at least through various movie versions.

On one level, many see Don Quixote as a comical, perhaps even pathetic figure, who has lost touch with reality in his quest for glory. Trumps critics would have no problem seeing him as that character.

But a closer look at Don Quixote reveals much more. Brushing aside his eccentricities, many see in him an earnest, even noble crusader, endowed with qualities that make a strong leader.

Last year, Forbes published an article entitled Three Lessons Leaders Can Learn From Don Quixote About Strategizing. One of those lessons suggested that the foolishness which brought Don Quixote so much ridicule should be encouraged by leaders – that it indicates an ability to ignore short-term setbacks in the quest for strategic goals, a willingness to think outside the box, to take risks, regardless of the consequences. Simply put, what some perceive as foolishness, others see as boldness.

And Don Quixotes lessons in character have also been recognized by academia.

The late James G. March was an author, political scientist, and professor at Stanford University. He produced a film about the leadership lessons we could all learn from Don Quixote. In it, he tells us that Innovation demands a willingness to deviate from conventional knowledge, and to persist in the face of failure  in short, to be foolish. He suggests that we are willing to follow Quixote, not because hes a model
leader – he is not – but because he reflects so many of the qualities we value in our leaders  among them, imagination, vision, persistence, and commitment.

As the head of a vast real estate empire, Donald Trump had established his leadership credentials long before his election to the presidency. Like Don Quixote, hes often mocked for his eccentric, unorthodox methods, as he reaches for noble and lofty, sometimes impossible, goals. The Spanish nobleman was engaged in an endless quest for lost chivalry; likewise, Trump has been on a quest to restore those things that were once universally valued in America.

True, Quixotes enemies were imaginary – windmills, dragons, and wizards – but even so, it was his determination and commitment that made him an inspirational figure.

It was that same unstoppable determination and commitment that enabled Donald Trump to achieve goals that were once thought unreachable. Against all odds, he won the presidency in 2016. As president, he created the strongest economy in decades. He helped orchestrate what no other president could  peace agreements between Israel and three Arab nations, the United Arab Emirates, Bahrain, and Sudan. And when the coronavirus crippled our economy and killed vast numbers of Americans, the experts said it would take years to develop a vaccine. Under Trumps leadership, distribution of an effective vaccine began within months.

Unlike Don Quixotes imaginary enemies, Donald Trumps foes are real. They are the denizens of the swamp, the corrupt politicians and the corrupt journalists who enable them. Theyre the globalists and socialists who seek to undermine Americas power. Theyre the ones who encourage illegal immigration as a source of cheap labor and illegal votes, and yes, theyre the ones who will stop at nothing to defeat him. Trump doesnt pussyfoot around them, and hes unencumbered by "political correctness."

In a world where cowardice, corruption, and indifference are all too common, Donald Trump, like Don Quixote, fights his battles virtually alone. Its unfortunate for our country that the courage, commitment, and unswerving sense of righteousness shown by him have become such rare commodities in America today.

October 20, 2020
How much corruption will Democrat voters stomach just to defeat Trump?