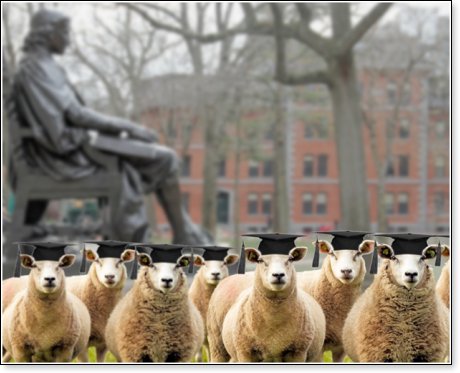 On the eve of President Trump’s departure from office, and following the recent mayhem at the Capitol, Democrats and the left have engaged in what can only be called a feeding frenzy. They’ve decided to launch yet another baseless impeachment, arguing that Trump is an immediate threat to our democracy – even though he was days away from leaving office – even though they’re openly considering delaying the trial for months.

And social media have now cast off all pretense of objectivity and fairness. With Trump’s departure from office, they’ve mustered up the courage to do what they’ve always dreamed of doing. As they assemble their forces to erase his existence, they warn that his 75 million supporters are the next targets.

It’s no surprise that the cancel culture has also jumped into the fray.

At Harvard University, students are now circulating a petition aimed at revoking Harvard degrees from any alumni associated with the Trump Administration. Specifically mentioned are Ted Cruz, Kayleigh McEnany, and Dan Crenshaw.

The petition calls the riot at the Capitol an insurrection by racists and Nazis, intent on killing or capturing members of Congress, and incited by President Trump. The generous use of assumptions, hyperbole, and assertions of racism makes the melee at the Capitol seem somehow more appalling, more horrifying than the summer-long violence across the country, instigated by BLM and Antifa. Those riots, incidentally, resulted in the death of more than a dozen citizens and more than $1 billion in damage. They also fit the definition of “insurrection.”

The signatories of this petition have made clear their other obsession – critical race theory, referring to “white supremacy” and “white supremist” six times in the 800-word text.

Most objective Americans have long known that college students generally lean far to the left, and they know where their radical ideology and anti-Trump hysteria comes from.

It was on full display in a recent article appearing in the Harvard Crimson, ‘A Real Dark Pandora’s Box’: Harvard Faculty React to Storming of U.S. Capitol. Regarding that infamous riot, the article reports a litany of anti-Trump sentiment from various faculty members. It was the exact same sentiment regurgitated in the petition. Nowhere in the article was there a single comparison to the seizure of several blocks of a major city by BLM. There was no mention of the widespread summer violence incited by its members. And though many of those faculty members talked about Trump’s inflammatory rhetoric, none of them ever mentioned the lunatic rants of Maxine Waters and others on the left. The only opposing views appeared in the comments section.

Then there’s the assertions of racism.

One distinguished Harvard professor, Orlando Patterson, was interviewed by the Harvard Gazette last summer. The recurring theme throughout the interview was police brutality and white supremacy. Patterson went so far as to proclaim that “20 to 25 percent of whites today still embrace white supremist views.” Most of us who have spent our lives living and working outside academia know those figures are vastly inflated. Most Americans would be hard-pressed to cite a single example of white supremacy. The article didn’t explain how the professor arrived at his estimates, or if any of his students ever challenged them.

In fact, the same man offered a different perspective in a 1991 opinion piece, in which he stated: “…America, while still flawed in its race relations and its stubborn refusal to institute a rational, universal welfare system, is now the least racist white-majority society in the world; has a better record of legal protection of minorities than any other society, white or black; offers more opportunities to a greater number of black persons than any other society, including all those of Africa…”

In that same interview, referring to the Clarence Thomas SCOTUS confirmation, Patterson observed that “the only aspect of these hearings likely to have increased racism was the journalists' shrill and self-fulfilling insistence that the nation is exploding with racism.” Patterson was right back then

Since its establishment in 1663, one word has appeared on Harvard’s coat of arms: Veritas. Truth is a noble goal, but it’s rarely simple or unvarnished. It takes critical thinking and intellectual curiosity to reveal the real truth. More often than not, it has to be coaxed, finessed from different, opposing sources. It’s unfortunate for America that the single source for students is their progressive professors, most of whom paint a grotesquely distorted image of America.

America’s past leaders, many of them Harvard graduates, understood that no country is perfect; but that knowledge never diminished their pride in the country that gave them so much. After ending slavery through a bloody civil war, they helped defeat the enemies of freedom in two world wars, they put a man on the moon, conquered disease, and ended systemic racism and discrimination in America. There’s still more to be done, but it can only be done by people who are courageous, objective, grounded, and proud of their country.

By definition, those petitioners are America’s future leaders, but they can never fill the shoes of their predecessors. They’ve been exposed as hateful, irrational, and vindictive – all the things that define the cancel culture – nothing that defines leadership.

Lacking critical thinking and intellectual curiosity, they’ll never know what truth is. They’ll only know what their radical professors tell them. And what they see as courage is just an irresistible instinct to flock.