Peter Lemiska
Can authoritarianism take root in a constitutional republic? 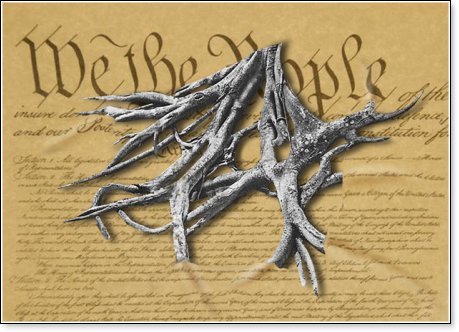 Like most older Americans, I’ve always been proud of my country. Those of us who have seen the corruption, the chaos, and the ultimate collapse of so many other countries around the world have always felt secure, fortunate – even blessed – to live in a land where opportunity abounds and freedom is enshrined in our Constitution.

We’ve always felt immune from the widespread poverty suffered in third-word countries. And we never thought for a minute that the endemic government corruption in those countries could ever exist in America, where the rule of law has always prevailed, where the world’s preeminent law enforcement agency and an impartial judicial system helped guarantee equal justice for all.

We’ve always believed that the Constitution protects us from would-be dictators bent on fundamentally transforming our country, imposing some other form of government contrary to the will of the people.

We’ve always known that our constitutional republic may not be a perfect system of government, but it’s far better than any communist or socialist government, any dictatorship or oligarchy in existence. The opportunities America offers, the liberty it guarantees, and the independence, self-reliance, and personal responsibility it nurtures have made America unique – even exceptional.

It was made exceptional by the documents that established our nation.

But is it beyond the realm of possibility for an elected president to take all of that away, to claim absolute authority, as has happened in other countries? Is it possible for authoritarianism to take root in America?

All too often, freedom is taken for granted, but history tells us that it can be crushed in an instant. We’ve seen it happen in so many countries. Think of Hitler’s rise to power in Germany, the 1973 takeover of Chile’s democratically-elected government by General Pinochet, and the Spanish Civil War of 1936-1939, when Francisco Franco overthrew the Second Spanish Republic and began his dictatorial reign.

We tend to think of dictators as powerful figures – cunning and ruthless men like Hitler, Stalin, and Saddam Hussein. But not all dictators fit that mold, and not all dictatorships are spawned out of violence. There are other, more insidious ways that authoritarianism can take root – even in a constitutional republic.

What if the people somehow elected a president who was, by all measures, unfit to lead? Maybe he was utterly void of judgment and conviction. Maybe he was cognitively challenged. Or perhaps there was strong evidence that he’d engaged in illicit activities, perhaps influence peddling – bribery – or was somehow compromised by a foreign power.

And what if that president began his term by openly flouting constitutionally passed laws, including immigration laws created to keep his country safe? And then he began to issue unilateral, arbitrary, and unlawful decrees and mandates that devastated the nation’s economy and produced the highest inflation rate in 30 years, with no end in sight?

The U.S. Constitution provides a means to remove a president who engages in such “high crimes and misdemeanors,” or who is somehow unable to discharge the duties of his office.

But what if the legislative body responsible for initiating those proceedings were controlled by a political party supporting that president’s agenda? What if that party cared more about political power than it did about the future of its country?

And finally, what if an unambiguously biased news and social media protected the president, his party, and their agenda? What if that media were essentially the propaganda arm of the party?

We don’t have to suppose these things. We’re watching them all play out in America today.

And we don’t have to guess Joe Biden’s intentions, either. He has told us, in no uncertain terms, he sees the worldwide pandemic not as a crisis, but as an “incredible opportunity” to “fundamentally transform the country.”

One thing we will never understand, though, is exactly what, in Joe’s mind, needs to be fundamentally transformed in a country that rose to superpower status in just 200 years after its birth, a country that he supported for virtually his entire life.

Author and Georgetown University professor Fathali Moghaddam wrote a book a couple of years ago entitled “Threat to Democracy: The Appeal of Authoritarianism in an Age of Uncertainty.” In it, according to a Georgetown review, the professor argues that “Crisis incidents have the potential to turn a democracy into a dictatorship, even in a country like America.”

Maybe it was Joe Biden’s inspiration.

Biden is no Hitler or Stalin. He’s a weak man in an immensely powerful position. If he continues to abuse that power, uninhibited by the firewalls the Constitution provides, unchallenged by a collusive press, the Constitution itself will become irrelevant. Government control will continue to expand, individual freedoms will shrink, and America will become a de facto dictatorship.

Everything is in place for the fundamental transformation of America. The only other element needed to make it happen is still in question: How compliant will the American people be?