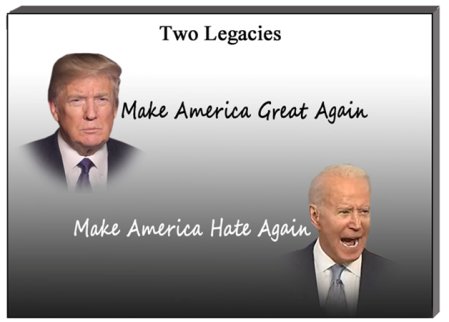 With only one year into his presidency, it’s probably too soon to be talking about Joe Biden’s legacy. But from the very beginning of his administration, Biden has shown a willingness – no, a commitment – to foment division and hatred. Unless he somehow acquires the skills of a real leader, it’s likely that his legacy has already been established.

Even before the 2020 election, Biden was feeding the ugly and false narrative that racism is endemic in America’s fiber. During an interview in June of that year, he was asked if he believed there was systemic racism in law enforcement. Biden responded, “Absolutely. But it’s not just in law enforcement, it's across the board. It's in housing, it's in education, and it's in everything we do. It's real. It's genuine. It's serious.”

That cynical, warped, and divisive campaign ploy stayed with him even after the election. During his inaugural address, which ironically focused on unity, he couldn’t help invoking “the sting of systemic racism.” It was his words as a public figure that helped spawn the defund the police movement, and contributed to the growth of critical race theory and racial division in general. But he doesn’t talk about it much these days, because on January 6, 2021, he found a new issue to help divide America and foster more hatred.

The incident at the Capitol has become pure gold for Biden and the Democrats. They’re using it to portray the people who participated, and in fact all of his critics, as anti-American insurrectionists, worthy of public scorn.

But if that event was an insurrection, it was unlike any in history. The only firearm discharged was the one used by a panicked Capitol Police Officer, who shot and killed an unarmed female protestor. And even the FBI investigation concluded there were no plans by those at the capitol to overturn the election, no intention to overthrow our government. And if it was an insurrection, why were none of the participants ever charged under Title 18, Section 2383 of the U.S. Criminal Code: “Rebellion or Insurrection"? In fact, they were never charged with that statute, treason, sedition, or anything that would label them insurrectionists or disparage their patriotism.

There was no insurrection on January 6th.

What we witnessed was a visceral response to something no one ever expected to see in our country. Those so-called insurrectionists were protesting widespread irregularities in the presidential election that caused them to have deeply serious doubts about the integrity of our electoral process.

And the heavy-handed prosecution of those 2000 passionate miscreants won’t solve the real problem American is now facing. Because of the Democrats’ pre-election skullduggery, vast numbers of Americans still distrust the election results. According to recently published Monmouth University polling, nearly one-third of the American public – that’s more than 100 million Americans – still believe that Biden won the election through voting fraud. They’re not tin-foil-hat conspiratorialists. They’re rational Americans with legitimate concerns.

Biden doesn’t have the mandate he pretends to have. Had he shown leadership, he would have acknowledged the concerns about those eleventh-hour, unconstitutional changes to election laws. He would have conceded that those changes resulted in mass confusion and unprecedented numbers of voting irregularities. He would have vowed to investigate all of it as intensely as Democrats investigated President Trump.

But instead, devious and manipulative Democrats chose to ignore the voting irregularities and instead immediately labeled the resulting melee an “insurrection,” an “attack on our democracy.” They decided to divert attention from the real reason for the clash, and turn Americans against each other.

Regardless of where we stand on the January 6th incident, there’s no doubt that cynical Democrats are still embellishing and exploiting the event for political gain.

When he proclaimed, “[W]e’re engaged anew in a struggle between democracy and autocracy,” did that, perhaps, remind him of the arbitrary and autocratic vaccine mandates he’s imposed on the people? Did it evoke memories of those illegal changes to state voting laws, or his obstinate, unilateral refusal to enforce our immigration laws?

He clearly didn’t grasp his own breathtaking hypocrisy when he pontificated about obeying the law only when it’s convenient, or when he chided the country, “[I]t’s up to all of us – We the People – to stand for the rule of law,” and “We’re a nation of laws; of order, not chaos; of peace, not violence.” Juxtaposing his words with the images of millions of foreign citizens illegally flooding across our borders, and with the nationwide burning, looting, and killing that Democrats called “peaceful protests,” it’s clear that he has no understanding of the word hypocrisy.

But it’s hatred and division that have become the real hallmarks of this presidency. That is how Biden will be remembered. That will be his legacy.