Peter Lemiska
Our freedom depends on an unbiased DOJ 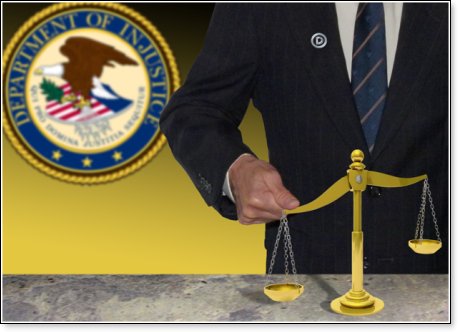 No one is above the law!

How many Democrats smugly trumpeted those words after the FBI raid at Mar-A-Lago? They happen to be right, in principle. In free, democratic societies, equal justice under the law is not just a cliché. It’s more than just a noble concept. It’s the lynchpin that holds all orderly societies together.

But when pontificating Democrats like Merrick Garland and Nancy Pelosi proclaim that no one is above the law, it sounds like the set-up for a joke. It leaves us waiting for a punchline that never comes.

We’re all too familiar with the rogues’ gallery of Democrat miscreants and lawbreakers who have never been held accountable for their actions, mostly because of a politically biased justice system.

Long before Hillary Clinton’s private server and the Biden’s influence peddling schemes, there was Eric Holder, Barack Obama’s attorney general and his self-described “wingman.” Holder had the distinction of being the first ever attorney general cited for contempt of Congress after obstinately refusing to surrender subpoenaed documents. He was never criminally charged.

And there was Sandy “Socks” Berger, Deputy National Security advisor under Bill Clinton. He was filmed stealing classified documents from a National Archives reading room by stuffing them in his socks and pants. He later lied about it to federal investigators. But after eventually pleading guilty, he paid a fine, and was sentenced to nothing more than probation and 100 hours of community service.

In 2013, James Clapper, Director of National Intelligence under Obama, provided false information to Congress while under oath. He escaped perjury charges by blaming his patently false statement on a lapse in memory – even though his office had been briefed on the questions the day prior to his testimony.

But all that pales compared to the Hillary Clinton scandal. The affidavit supporting the search warrant at Trump’s Mar-A-Lago sounds pretty damning. It’s filled with terms like “Top Secret,” “Sensitive Compartmented Information,” “evidence of obstruction, and “…imprisoned not more than ten years.” But those exact words would have been used in any affidavit supporting the indictment of Hillary Clinton – if only the FBI director had not arbitrarily determined that “…no reasonable prosecutor would bring such a case.”

And there’s so much more.

In 2016, a few senior FBI agents took it upon themselves to prevent Donald Trump’s election to the presidency. Determined to thwart the will of the people, they did all they could to promote the Russia collusion narrative. Though that attempt failed, they had better success in the 2020 election, by suppressing credible, and deeply troubling information about Joe and Hunter Biden’s influence peddling scheme. Those efforts helped elect our current president – one who may now be under the influence of one or more geopolitical adversaries. It’s a possibility reinforced by Biden’s globalist, socialist, and outright anti-American policies.

And we shouldn’t forget the incident involving pro-abortion activists. They harassed and attempted to intimidate our Supreme Court Justices and their families for weeks on end, following the leak of the Roe v. Wade decision. It was a blatant and outrageous violation of federal law. But because the pro-abortion cause is supported by Democrats, Garland chose to look the other way.

The unprecedented overreach targeting a former president and the apparent effort to eliminate a potential political rival is just the latest example of the injustices meted out by this Department of Justice.

For obvious reasons, most Democrats don’t see a problem, but any reasonable person looking at the recent history of the DOJ and FBI can only conclude that it’s not just liberal bias. They’ve become weapons of the Democrat Party, routinely wielded against political opponents. There’s something else that reasonable people should agree upon: Democracy can’t exist where the rule of law is subverted by politics.

There is a glimmer of hope, though.

No one ever joins the FBI to target political opponents or to sway American elections. They set out to fight crime and corruption and to help keep our country safe from its enemies, foreign and domestic. But power and hubris often breed corruption, and as idealistic young agents move up the ranks, some of them, the Peter Strzoks and Timothy Thibaults, lose sight of their purpose.

Perhaps our best hope for reforming the FBI lies with the dedicated and principled insiders, the growing number of whistleblowers who haven’t forgotten why they joined the bureau. They’ve come under pressure recently by the same man determined to pervert their mission. Garland issued a memo several days ago aimed at blocking further communications with congressional representatives. But the vast majority of agents still believe in the ideals reflected on the FBI seal—fidelity, bravery, and integrity—and the oath they took to “protect and defend the Constitution.” They won’t all be silenced. They may be our best hope to reform the FBI and DOJ, and save our democratic process.