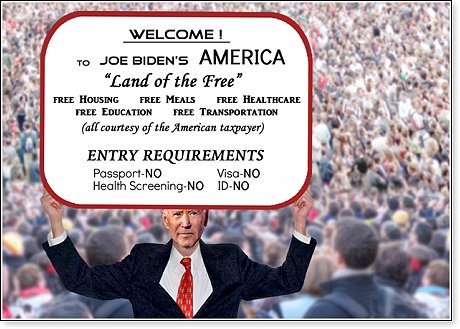 To those who have been following the nightmare on our southern border over the past two years, it’s utterly inconceivable that anyone in America would be unaware of the problem. But until Governors Abbott, of Texas, and DeSantis, of Florida enlightened the residents of a few liberal strongholds, it seems that they were completely clueless about the throngs of foreign citizens illegally swarming into our country every day. Some estimate that as many as five million immigrants have crossed our border illegally since Joe Biden took office.

Seemingly oblivious to the surge overwhelming border towns like El Paso and Eagle Pass, Texas, liberal meccas across the country continue to welcome and harbor people who are in this country illegally – including hardened criminals. Places like New York, Chicago, and Washington D.C have long been “sanctuary cities.” During the Trump Administration, entire states, like Massachusetts jumped on the bandwagon, becoming sanctuary states. Illegal aliens across the country know full well they will be protected from deportation if they can only reach one of those sanctuary communities, purportedly established as enclaves of compassion and benevolence.

We would all probably agree that compassion and benevolence are not the same. Compassion is what we feel. Benevolence is what we do about it. We might all feel compassion for the plight of immigrants suffering under third-world conditions. Benevolence, on the other hand, refers to generosity – how far we’re willing to go to accommodate them as immigrants. No doubt liberals in those sanctuary communities have convinced themselves that they’re imbued with a generous amount of both attributes.

Recently, while serenely basking in their altruism, liberals in one sanctuary community were jolted into reality by a busload of Biden’s illegal immigrants, courtesy of Ron DeSantis. That’s when they came to realize that there were limits to their benevolence. They also learned that those millions of citizens coming from poverty-stricken nations don’t arrive here self-sufficient – that someone has to pay for their food, housing, healthcare, and education. Maybe they even began to understand that there really are good reasons to regulate immigration.

By delivering a taste of Biden’s open border policies to Martha’s Vineyard, DeSantis was demonstrating that now, every town is a border town, that no community can forever evade the impact of Biden’s policies. It was also his way of saying that those communities that incentivize illegal immigration should be the first to reap the consequences.

Naturally, the politicians in those sanctuary cities were, and continue to be, beside themselves. They’re so busy condemning Abbott and DeSantis as racist, un-American, and un-Christian that they can’t see their own hypocrisy. As they desperately tried to cling to their own version of moral superiority, they wasted no time shuttling those immigrants away from their communities and onto military bases or Republican suburbs. It suggests that there are limits to their compassion as well as their benevolence. If there’s any doubt about that, Nancy Pelosi recently cleared it up. While trying to explain the flood of immigrants and the need for them to remain in the south, she announced at a recent news conference that they’re needed to “pick the crops down there.” It tells us all we need to know about liberal compassion.

The unorthodox tactics used by Abbott and DeSantis highlight one of the less significant consequences of open borders. The unsustainable cost to taxpayers doesn’t begin to address the influx of drugs, the crime, disease, and the potential terrorism that also come with unregulated immigration. Governors Abbot and DeSantis can’t solve the border crisis alone. But they’ve taken a significant step in the right direction. They’ve exposed a critical problem that liberals have desperately tried to ignore.