Chip McLean
The end of the Wicked Witch of the Left? 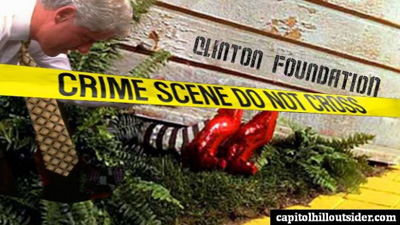 Could the death of the Hillary Clinton campaign be looming?

Even the left-wing MSM seems to be sensing that events could be moving to a cataclysmic end for Hillary's presidential aspirations.

Every day (sometimes hourly), there are new revelations about missing, deleted emails that are being recovered; more and more evidence that points to Hillary's deteriorating health; previous scandals that have gained new traction; more to come from WikiLeaks...but the thing that is truly proving to be the albatross hanging around Hillary's neck is the Clinton Foundation scandal.

By now it should be patently obvious that this so-called charity is nothing more than a money laundering scheme where political influence and favors are sold to the highest bidder. The millions that have poured into the Clinton Foundation from corporations – and even worse – foreign interests, have been influencing government policy.

It is especially egregious that these activities occurred while Hillary was Secretary of State. While supposedly her ethics agreement precluded Hillary from conducting such activities, other State Department employees – including gal-pal Huma Abedin were busy arranging access to Hillary by foreign mega-donors to the Clinton Foundation. The left-leaning website Politico broke this story about Abedin brokering a meeting with Crown Prince Salman of Bahrain.

The New York Times ran a story over the weekend detailing the problems facing Hillary regarding conflicts of interest due to multi-million dollar donors to the "charity" being from Saudi Arabia – as well as other foreign nations.

The reality is that Hillary Clinton couldn't be trusted to keep her "charity" separate from her duties to the State Department – so why would anyone trust her to do so as President?

The Clintons have more skeletons than a New Orleans cemetery, but it is the Clinton Foundation money laundering, influence peddling scheme that has made her so toxic that a number of her fellow travelers on the left are cutting her a wide berth.

This could ultimately be the house that squashed the wicked witch of the left.