January 8, 2009
Largely due to a technicality, the United States Senate on Tuesday refused to admit Roland Burris, former Illinois State Comptroller and the ridiculous pick of disgraced Governor "Hot Rod" Blagojevich to fill Barack Obama's vacant Senate seat. Whether the Democrats' will for this just refusal will soon fade, or if the people of the Land of Lincoln will have a chance to elect Obama's Senate successor is still a matter of much debate, but how we got ourselves in this fine mess begs a thorough examination. 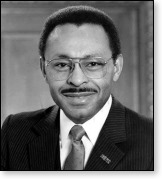 While Blago's motives (namely, trying to save his own ass) for going against both the Senate and the president-elect's wishes seem abundantly clear, Burris and associates' reasons at first seem reasonable, but in the end keep coming up racist. While Rod's story, that of a man caught red-handed seeking whatever friends and cutting whatever deals he can before being sent from the state house to the big house, is remarkably similar to the parable of the dishonest steward (Luke 16:1-13), Burris' quixotic quest appears to start in a house of prayer, but always ends by playing the "race card." "My prayers have been answered, I prayed throughout that the governor would continue the [Obama] legacy and appoint an African," proclaims U.S. Rep. and avid Burris supporter Bobby Rush, before raising his voice and adding, "I would ask that you not hang or lynch the appointee as you try to castigate the appointer." Rush, of course, initially denied such loaded language was racist, but showed his true colors by later saying (at a black church service), "No one plays the race card better than the United States!" and confirming today that today's refusal to seat Burris was due to the fact that Roland was black.

Ironically, it is Richard Roeper, Chicago Sun-Times columnist and unabashed liberal, who put this appointment in perspective. "What percentage of votes do you think Burris would garner in a (fair) contest?" he asks of the man who lost the primary bid for governor in 1994, 1998, and 2002 and for mayor of Chicago in 1995. "I'd say ... 3 percent. Let's be honest ... Blagojevich picked a guy who is about the 16th choice of the people of Illinois, at best." Still, this is a far cry from Sun-Times colleague Laura Washington's column. "Where are the talking drums for black America?" she exhorts. In urging them "to take a stand against the first black president," Washington calls on Tom Joyner, Al Sharpton, Jesse Jackson Sr., etc. to "pump up the volume," "raise a holler ... influence the drama," "stir the pot to a boil" "to keep the seat." In other words, despite realizing that Burris is, how shall we say, not exactly the best candidate, she nevertheless seeks to confirm this shoddy endorsement with the mob mentality. Thus, she asks black leaders to operate in the same fashion the Klan did, and in doing so lowers herself  and all that follow  to their level.

"I am the junior senator from Illinois!" Burris preached from the pulpit of Chicago's New Covenant Baptist Church, concluding, "They can't deny what the Lord has ordained." No, this "prayer" does not disgust me, say, as much as the Hamas' or Hezbollah's cry that God wants them to wipe Israel, then the United States, off the face of the earth. Still, taken to its logical extreme, that being selecting black leaders not because of the content of their character but merely because of the color of their skin, it comes real close. For as low as the Blagovichs' religion goes, at least they are honest about this part of their dishonesty. When Michael Ettinger, Rod's lawyer, was asked if there was any chance Rod's brother (conveniently named Rob) would cooperate with the Feds against his sibling, Ettinger prophesied, "Not a prayer."

Which leads us to ponder if that quote holds true for Obama. Indeed, upon first glance, Barack's statement, "Roland Burris is a good man and a fine public servant, but the Senate Democrats have made it clear weeks ago that they cannot accept the appointment made by a governor who is accused of selling that very Senate seat. I agree ... and it is extremely disappointing that Gov. Blagojevich has chosen to ignore this ... [Rod] is entitled to his day in court, but the people of Illinois are entitled to a functioning government free of taint and controversy," would seem to indicate Obama would be disappointed (and his prestige diminished) if the Democrats, feeling the the daily-growing heat of the Illinoisans and deciding Roland (as opposed to an elected Republican) is the lesser of two evils, appointed him against Obama's wishes. But upon further inspection, Obama's carefully crafted reflection is perfect for every occasion. If the Dems cave to black pressure and seat Burris, Obama will note that he always said that Roland was a good man and this was always the Senate's decision. If a special election is held, he will remind us that he stated the will of the people must be served. And if the Blago is deposed and Pat Quinn, the next in line for the governor's seat, appoints someone else, Obama will remind us how he always says that justice must be served.

For someone not yet the president (a fact many seem to forget!), Obama has endured his share of controversies. But whether it is this sorry saga or the story of the other governor, the tale of how the rich got Richardson, the leader who may not go to jail but no longer fits the "Bill," Barack has already developed an uncanny way of staying above (or at least beyond) the fray  but not necessarily for the good. Obama has left Chicago, leaving behind not only its politics but the church where Wright was black and black was always "Wright." But I sometimes wonder if Obama's new house of worship may not be even worse.