Tom O'Toole
The P.O.P.E. project: Prevent Obama from Proclaiming Evil (at Notre Dame)
These stones will shout (and march?): My Irish protest letter to Fr. Jenkins

March 27, 2009
"Presidents from both parties have come to [give the commencement address] at Notre Dame ... we're delighted that President Obama is continuing that tradition."
Father John Jenkins

"The hottest places in hell are reserved for those who, in times of great moral crisis, maintain their neutrality."
Dante 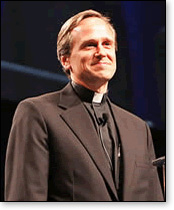 Humbly placed among Notre Dame's many famous religious monuments and statues stands one of the University's smallest and often unnoticed stone images. Recently erected by the Knights of Columbus and nestled in a little nook next to Sacred Heart Church, this tiny statue of Our Lady holding a baby and bearing the caption "In Memory of the Innocent Victims of Abortion" is easy to miss amidst the grandiose Gothic architecture. And yet, ironically, with your invitation of Barack Obama, the most pro-abortion President this nation has ever known to give the keynote address to Our Lady's 2009 graduates, this unassuming shrine has become the center of attention, or, as Simeon would say, "a sign of contradiction" (Luke 2:35). 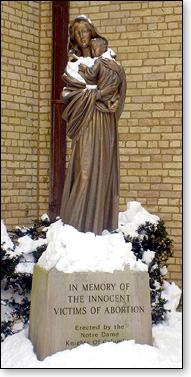 Speaking of contradiction, your invocation invitation to our new commander-in-chief (not to mention the honorary ND degree you bequeath him) clearly seems to contradict the U.S. Bishops' 2004 "Catholics in Political Life" statement, which reads, "Catholic institutions should not honor those who act in defiance of our fundamental moral principles. They should not be given awards, honors or platforms which would suggest support for their actions." After all, Barack is not just a little bit pro-choice, but his revoking of the "Mexico City Policy," coupled with his approval of massive funding for embryonic stem cell research and his big push for Illinois (his home state and mine!) to pass FOCA HB2354 in a mere two months, suggests a whole Culture of Choice  or Culture of Death, as that prolific Polish prophet, John Paul II, used to say. Of course, using phrases like "Culture of Death" is not exactly a great way to start a dialogue with pro-choice Democrats ("You know how feisty those future saints are!" you kid Obama's front men, assuring them the President will have smooth sailing once at Notre Dame) and by shoving such dogmas under the rug, you claim to have devised a better way for the University to show its Catholicity than the Bishops themselves. "We are not ignoring the critical issue of the protection of life!" you exclaim. "On the contrary, we invited him because we care about these issues, and we hope ... for this to be the basis of an engagement with him."

Assuming, Father, you are not planning an engagement to marry him (which I think even you would admit would throw all hope of salvaging the Barack talk for orthodox Catholics out the window), your slick apologetics appear to at least be taking the faith of the Christian faithful into consideration. Granted, I realize that, short of the Holy Spirit descending upon you, there is now no way in h-e-double hockey sticks you will rescind his invitation. However, if you are truly being honest about engaging Obama, as President of this University, it is your duty to start the dialogue, to make the first statement. You must tell the President that abortion is not a smart choice for a rich young girl who makes a mistake (as Obama implied to his own daughters), or the only realistic option for the poor single mother, as Planned Parenthood promotes  but murder, plain and simple. Heck, if you want to be prophetic, you can tell Obama that abortion is the second coming of the Slaughter of the Innocents (Matt 2:16-18), but as that would make Barack out to be another Herod, I can see why you might want to hold back on that one. Secondly, and just as importantly, you must tell the pro-life students that not only is it their right to protest, but that they are right! I've received too many e-mails like the one from ND parents that state their son (an ND junior) "has been attacked and vilified by many students for opposing the Obama honorarium," or the Irish pro-life underclassman who writes, "It's ironic that the man who calls for unity at all levels of society has served to divide a close-knit campus ... their [attacks] are vile, vicious and malicious." True dialogue demands you to not only encourage and protect these noble student protesters, but welcome the adult alumni that they have invited to join them in this "engagement." For if you will not at least speak out for the unborn, Father, but instead conspire to silence "Her Loyal Sons" of the pro-life cause, I suggest you give up the charade right now and remove every mosaic, sacramental, and statue before he arrives. For if you do not, I tell you these very stones will shout (Luke 19:40). And (if my vision is not just figuratively, but literally correct) the statues, led by the last and least monument, Our Lady of the Unborn, will assemble by the Dome and march toward the stadium, as so many fans, bands and football players have done before them. Only this time, they do not stop at the stands or sidelines, but proceed to the stage, not ceasing their marching until Obama (and all the dissident teachers and theologians) have fled, and Notre Dame is once again a safe and sacred place for Our Lord and Our Lady to dwell.