Tom O'Toole
Pro-life hero series, #2 Emmett Grayson: A "Child of the Wind" becomes a man of "The Word"

February 18, 2010
"I don't love her, I don't hate her  for her, I don't feel very much at all
But blood that we both shared and spilled
Keeps turning up like writing on the wall
I could have raised my voice to say this choice to kill our child would mean 'goodbye' ...

"[But] from time to time I wonder if she ever has a dream a lot like mine."

 Emmett Grayson from "A Dream A Lot Like Mine" 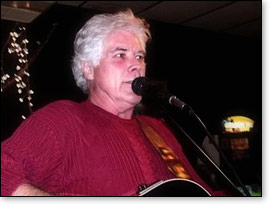 While many readers wrote to say they enjoyed my first pro-life (super) hero story about Randall Terry, a number objected, saying the messy divorce that ended Mr. Terry's first marriage (which occurred before Terry converted to Catholicism) disqualified him from ever attaining Christian "hero" status. To those readers, I can safely say that if you didn't like Terry's tale, you'll probably hate the saga of pro-life country singer Emmett Grayson (whose current goal is to get a gig on Huckabee) because this revert to the Church was married and divorced thrice before he saw "the Light." As for myself, I keep writin' about these folks, because like my namesake Augustine, I figure Christianity is the only faith where such riff-raff cannot only be forgiven, but famous.

If Emmett Grayson McCarthy's (Emmett drops his surname on stage, but keeps it on his "home remodeling" business card) life were a country song, it would go something like, "If I hadn't been a sinner I would have never learned about the saints." Born into a devout Catholic family of six girls but he the only boy, Emmett, despite practicing parents and a Catholic school education, soon grew to find the faith of his mother and father irrelevant. Of course, the Marxist Liberation Theology teachers at his Catholic high school or the liberal Jesuits who taught McCarthy in college (all too common in that post-Vatican II era) didn't help matters, nor did the fact Emmett himself began drinking liberally at age fifteen. Emmett also took up the guitar around that time, and since he was far more interested in emulating Dylan than Divine back then, he decided after graduation to move to Nashville and make a name for himself. But after years filled with far less hits than hangovers, Emmett realized this wasn't the name that he wanted, and finally decided to check out Alcoholics Anonymous.

"Was it difficult to admit to yourself you had a problem?" I wondered.

"Well, I was desperate enough to know I had to do something, and it was easier to admit to myself I was an alcoholic than a 38-year-old teenager," Emmett said. "In the end, I didn't necessarily agree with everything they had to say, but A.A. did get me thinking about God again."

This new sense of self worth also got Emmett again thinking about raising a family, but with neither his sobriety nor reconversion to Christianity complete, he failed miserably. "Did the abortion occur during your first marriage?" I asked.

"But you did keep your other children."

"Yes! My son Matthew is from my second marriage, and my daughter [Grayson Arlene] is from my third. The marriages both failed, but from them I have these two great gifts from God."

"Do they both live with you now?"

"'More addresses than birthdays?' That sounds like a country song!" I remarked, but as it was a sad song, Emmett did not reply.

Still, to paraphrase a famous rock lyric, there is no doubt Emmett has taken a sad song and made it better. After his third marriage, Emmett found his way back to the Church of his youth, and the profound peace he found there allowed him to finally be a wise and loving father to his children. Still, something was missing. In the maze of his trying to thrive or at least survive his multiple marriages he had put all musical aspirations by the wayside. Besides, the songs he wrote and sang in those days weren't exactly sacred, and he had no desire to go back to the world of bars and guitars. But that all changed in 2007, when Emmett suffered a heart attack. While recovering, Emmett heard God say you are going to start composing and playing again, only this time you're going to do it for ME. And true to His Word, that Good Friday a song about Christ's Resurrection literally sprang into Grayson's head, and "That Rock is Gonna Roll" was born.

"So 'That Rock' is the song you hope to hit Huckabee with first?" I asked.

"Yes, as we are aiming for Good Saturday, we figure that song would be perfect. Of course, we'd like to perform "A Dream A Lot Like Mine" then, or shortly thereafter, as well..."

While "That Rock" is no doubt an inspired Easter ballad, "A Dream" is a pro-life song powerful enough to change hearts. "The corporate cultural monoliths who run radio mistakenly think people don't want to hear this," Emmett told me. "So we just have to go around them." Indeed I think Emmett is on to something. Not only is "country" the perfect genre to tell a true pro-life tale, but Fox recently let rising star Matt Kennon play "The Call," with its not-so-subtle pro-life message on their morning news show. True, Kennon is young and a bit more of a heartthrob than the elder statesman Grayson, but as much as I like Matt's song, it is like comparing the Life message of Tim Tebow to that of Lou Holtz. Meanwhile, Grayson is back patiently performing in the Nashville bars that nearly destroyed him, saving hecklers one soul at a time...

"Isn't it hard to get your Christian, pro-life message across in that setting?"

"Tom, there's usually only two reasons people go to these bars. The first is to drink and the second is to wake up naked next to someone you've met there. But judging from the men and women who've talked to me afterward, I've given at least a few of them a third. Besides, Jesus went where the sinners hung out too..."

"Speaking of sinners, what would you say to the pro-abortionists of today?"

"So it's not even a moral argument, but a logical one. But Planned Parenthood doesn't even argue logically anymore, saying a woman should have a choice, yet they always recommend abortion and seek to exclude the man from the choice too..."

"I have a theory about that," said Emmett. "In the beginning of the Gospel of John, it talks about 'The Word.' Now in Greek, 'word' is 'logos,' from which we get the word 'logic.' So my theory is if you don't have 'The Word,' you can't think logically."

"That's good! Say, Emmett, are you working on any songs now?"

"Actually, my friend Jack Bond [who will sing with Emmett if they get the call from Huckabee] just sent me a song he wrote called "Child of the Wind," that he started but wants me to fix. Jack has a much better voice [sort of Johnny Cash-like] but he says I am better at nailing the words."

"Or perhaps you were more of a 'child of the wind' than he was."

Emmett laughed, the laugh of a former child of the wind who had truly become a man of "The Word." As such I knew getting on Huckabee would no longer make or break him, but as it would provide him with a much greater platform to proclaim God's Word (not to mention a few less kitchens he would have to remodel) I prayed he would get the gig, realizing how blessed I had been to interview a country singer who had actually had a pro-life dream a lot like mine.