May 28, 2010
Switching back and forth between CNN and Fox News last night, I found that when it came to the Gulf Oil Spill, the two usually contrary channels agreed on two crucial points. First, the graveness of the crisis had reached epic proportions. Secondly, the Obama Administration (whose attitude appeared to be that since BP caused this mess, BP should clean it up) was doing next to nothing to solve this problem. 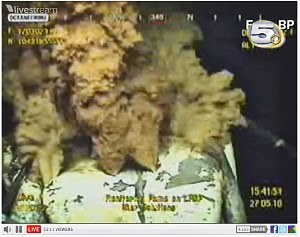 "The political stupidity of [Obama's] advisers is unbelievable!" exclaimed CNN analyst, James Carville, the usually staunch Obama backer. "He's got to get down here, and put someone in charge. People are dying!"

Meanwhile, Fox was making it clear that, now a full five weeks after the disaster occurred, President Obama was (still) not in Louisiana but in California for yet another political fund-raiser. "He is clearly putting his emphasis on fundraising now," concluded Sheila Krumholz, executive director of the Center for Responsive Politics, as Fox was taking glee in showing Obama being heckled by an "I'm telling without asking!" gay protester at the recent dinner for Senator Barbara Boxer. Then, after CNN showed Louisiana governor, Bobby Jindal, out in a small boat explaining his state's predicament of poisoned water and dying, oil-coated wildlife, and the subsequent unemployment, Fox told the tale of local heroes, tired of waiting for Federal funds or approval, "borrowing" 30 British Petroleum fishing boats and putting down sand berms to block the oil's advance on their own. And Jindal, the report said, not only commended the Louisiana leaders for commandeering the BP vessels, but vowed to join them in jail if Obama's Coast Guard halted their efforts.

And where, you say, was British Petroleum during these past five weeks while their underground well's leak now threatened the economy of the entire southeastern United States? Like Obama, they were sitting around making statements, each week half-heartedly throwing another hare-brained solution at the problem. Heck, this wasn't their country, and if their spill, unchecked by Obama's mighty mites, accomplished what the War of 1812 didn't, well, so much the better. I wish I had as much confidence in BP's latest mud-followed-by-concrete scheme as the President's men do, but based on their next plan of attack should the mud shoot fail, I cannot.

"And if the mud and concrete plan doesn't work," said a BP spokesman on CNN yesterday (and I swear I'm not making this up) "the next thing we'll try to plug the hole with is rope and golf balls."

"Call off the Coast Guard, and call up the PGA!" I declared.

"Well, if it works, perhaps Tiger Woods can redeem his reputation," Jeanette, always looking on the good side of a situation, added. And yet, as a Christian, one is taught to always look for the positive light even in the darkest of hours. Perhaps this disaster (and his heroic handling of the situation) thrusts Governor Jindal back into the 2012 presidential race. Personally, I believe the devoutly Catholic Jindal is one of the few who could beat Obama, for not only can he match the President's shrewdness, but Bobby's ability stems from honesty where Barack's comes from bulls  , I mean baloney. Yes, it is currently comforting to many Republicans to believe that Barack is merely incompetent. But I caution that Obama has often proved in the past to not be as stupid as he seemed. While one does not have to go along with the conspiracy theorists (that Obama actually planned the oil spill to give the Democrats a reason to stop all drilling and go full speed ahead with their "Global Warming" energy alternatives) on this one, conservative Christians should at least note that Obama does have one thing in common with the original "fun-razer."

When the Emperor Nero set the slums of Rome on fire, fiddling while Rome burned, he was the first ruler to (unjustly) blame his country's problems on the Christians, claiming this fledgling but courageous sect had done the evil deed. Now it is Obama who falsely accuses America's Christians (especially former President George W. Bush) as responsible for many of our country's ills. On the other hand, it is interesting to note that many of those die-hard Christians of A.D. 64 also considered Nero to be not just their nemesis, but the Antichrist as well.