Tom O'Toole
The lives (and faces) of Mother Teresa and Helen Thomas: the good, the mad, and the ugly

"I used to censor myself...now I wake up and ask myself 'Who do I hate today?'"
"Tell [the Jews] to get the hell out of Palestine..." Helen Thomas

Although initially you might think a comparison between Mother Teresa and Helen (no relation to Fighting Irish) Thomas to be crazy, the two female trailblazers had (at least initially) a lot in common. Both come from large religious families of middle Eastern decent, both decried injustice and poverty and forged fabulous careers in their attempt to fight it, and both succeeded in a male work world despite a lack of worldly feminine beauty. But in the end, one crashed and burned, while the other was beatified. So what went right  and wrong?

It is interesting to note how two woman from such similar humble beginnings could one end up so bitter and the other one so sweet. Is it because one kept her humility and religion while the other traded it for prejudice and feminism? Is it because Teresa realized you cannot be both against poverty and for abortion while Thomas did not? Yes, but it is best summed up by saying that because Mother Teresa decided to blindly follow Jesus she grew to actually see the Light (and thus to know the Truth) whereas Ms. Thomas, in falling in love with radical feminism, became blinded to the true Light and followed the Prince of Darkness instead. And nowhere was this more evident than their views on Jews and the Middle East. 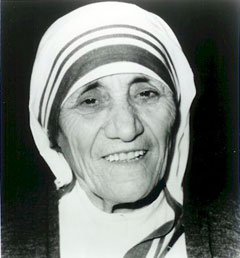 Again, we must start by remembering that when the White House's war against Iraq was about to commence, Teresa and Thomas were both among President Bush's most verbal opponents. Both woman protested against an unnecessary war and the potential loss of innocent life, but Mother Teresa, seeing "W's" firm stance against abortion, realized George would never deliberately kill innocent civilians, whereas Thomas actually believed that the war in Iraq was started in order that Bush could accomplish this offense. This lie was recently repeated when Helen accused Israel of "deliberately massacring" the occupants of the Turkish "humanitarian aid" ship, when live video showed this flotilla sentiment to be not only false, but ridiculous. Ironically, it is only due to our own President's suspicious new coolness to our once strongest Middle Eastern ally that the former head of the White House Press Corps was able to hang around long enough to make those fateful comments on RabbiLive.com, and finally hang herself so completely that even Obama (whom Helen recently named the most media-manipulative president she had ever covered, and that list goes back to Jack Kennedy) had to tell her (behind closed doors, of course) to get the hell out of here. 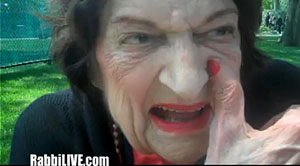 And yet, when we talk about legacies, even a seasoned journalist like Thomas will admit to the fact that a picture is worth a thousand words. And the picture that is most etched upon my mind is their faces; the once homely face of (now) Blessed Teresa of Calcutta becoming "something beautiful for God," while the never very pretty mug of Ms.Thomas now evolving into something akin to the facial skin of the wicked witch on the Wizard of Oz. One only hopes that Helen can look at herself in the mirror before she melts  or burns.