Tom O'Toole
Corapi corrupted: the parable of the lost "sheepdog"

He wants his home and security
he wants to live like a sailor at sea.
Beautiful loser, where you gonna fall
when you realize you just...can't have it all."
— Bob Seger, from the song "Beautiful Loser" 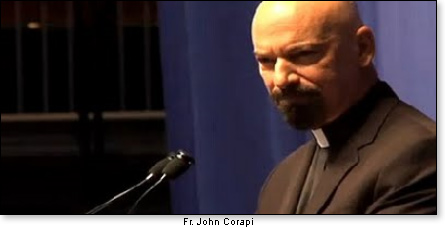 SALE ... "50% OFF ENTIRE INVENTORY" screams the salesman's old SOLT website, as the screen hawks written teachings such as The Rosary: Prayer of the Gospel; tapes such as "The Social Teaching of the Church," and t-shirts such as "Your Mama [that is, Our Lady] Wears Combat Boots," in the electronic window's ever revolving enticement of Holy merchandise. And you wonder if John Corapi, the man who no longer finds it profitable to call himself "Father," is trying to lead you to believe he will still touch on (and market) such topics in the future, or if he no longer believes these not-so-inclusive sentiments and is garage-saling his way to a clean break with the past. My guess is that with Corapi, the quintessential "beautiful loser," it will always be a bit of both.

Many have noted the seemingly countless ironies and contradictions in Mr. John "call me 'The Black Sheep Dog'" Corapi's June 17th statement (and out-there June 20th verbal follow-up) but what does this all mean for his future ministry which John appears ready to "unleash" on us? It is one thing to lose the title of "Father" on Father's Day, to leave your order, the "Society of Our Lady of the Most Holy Trinity" (SOLT) on (what is for Catholics) Trinity Sunday, but quite another to declare that not only is everything cool, but cooler than it has ever been. But if like me you wonder how it could possibly be better to minister as "The Black Sheep Dog" than as a Catholic priest, let's hear it from the dog's mouth itself. 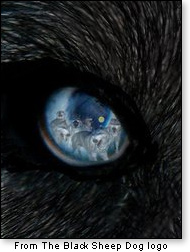 According to Corapi, John's transformation from Trinitarian priest to "hound of heaven" beast happened something like this. A "raging" "hateful" "alcoholic," "the one person I did more to help...than any person in my life," was "looking for a payday" and thus made some "libelous" "unsubstantiated" sexual misconduct charges against me and I was suspended. Although "I love the Catholic Church," and agree that the bishop is in charge and "will defend to the death...his right" to suspend me, the Church's laws regarding suspension are "illogical and impossible" and the bishop has no "qualifications" to "fairly investigate" my case. Asking only for my "civil and human rights," I was given the choice "to lie down and die" as a priest or be "thrown out as yesterday's garbage" as a layman, and on the advice of God and my many lawyers I chose the latter.

Nice try, John, but at least for orthodox Catholics, the ones you used to so successfully cater to, that explanation just doesn't wash. You have taught us too well that the true martyr, as opposed to the martyr in your own mind, doesn't "lie down and die," but stands up and fights. Whether you were unjustly accused and tried by a drunken ex-employee and a vengeful bishop is irrelevant. As you taught, unjustly accused priests like Pio or unfairly imprisoned padres such as John of the Cross didn't become saints by casting off their crosses, but by embracing them. And by now proclaiming it is you, rather than the Church (that you still claim to "love") who is the new guardian of the "Truth," you sound suspiciously like the Serpent who spun a similar yarn in a garden long ago.

For those Catholic converts whom Corapi brought to the Church who are now unsure which voice to follow, consider the following. Conspicuous in Her absence in his June 17th statement or his June 20th audio recording follow-up is Our Lady, Corapi's former "first" lady whom in the past was always present in the background of his talks. And lest the hopeful pentecostal think this potent preacher might be a good fit for his non-denom denomination, note that the name of Jesus, the "name...to which every knee shall bow and every tongue confess" (Phil 2:10-11), isn't found in Corapi's new confession of faith either. Sure, he mentions "God," but from these ramblings it isn't clear which God he now bows down to, although I have a good guess.

By trading the active priesthood for thirty pieces of silver (actually Corapi's ranch in Montana is worth considerably more than that, but you get the point) or the touch of a woman, or both, John thinks he now has it all. For now he can preach to an ever wider audience, while still claiming to cling to the eternal security of the Church. He thinks he is "The Black Sheep Dog," saving souls to a new and better way, but in reality, he is "The Lost Sheep" whom Christ must again bring back to the old pack if he is to have any hope of salvation. As an actor caught up in his newest persona, I'm sure John would scoff if I were to now compare him to the "Prodigal Son." But as a lover of logic and irony, he could only grudgingly agree if I gave him the title of "Prodigal Father."