Tom O'Toole
The Euteneuer trial: why I believe Doe

[We will] vigorously defend [ourselves] against...the false accusations [of complicity with Euteneuer]...To the extent Father Euteneuer has already admitted to engaging in highly inappropriate and gravely sinful conduct with a young adult woman, we can only emphasize that such behavior was never within the scope of his employment with HLI. -Stephen Phelan, spokesman for HLI

Can we believe anything this woman says? -Jenn Giroux, former HLI employee and current columnist for RenewAmerica

[in the chapel, and about to be touched inappropriately by Fr. Euteneuer]

Are you sure this is alright?

[impatient; looking at the tabernacle and then back at Jane]

Well, He would stop me if it wasn't! 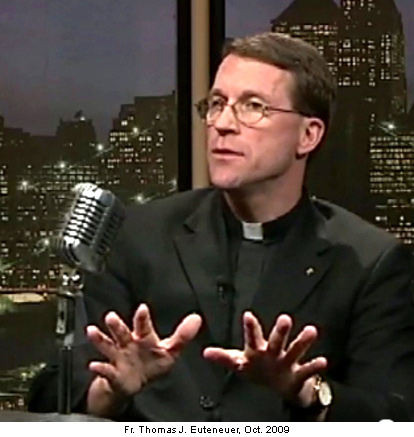 As if the legal gymnastics and character assassination against Jane Doe wasn't bad enough the first time around, with the Euteneuer sexual abuse case finally going to trial, the various legal counsels and (still!) pro-Euteneuer damsels (including a Catholic "Renew" columnist) are once again ramping up to damage Doe's reputation big time. And readers wonder why more rape victims don't come forward...

Of the two defendants in the suit, the defense waged by Human Life International, the pro-life organization Euteneuer presided over for ten years, is the most curious and comical, if you count black humor as comedy. True, the above statement by Stephen Phelan, is a far cry from Euteneuer's phony I'd love to stay in Arlington and be a big cheese at HLI, but I'm now sailing off into the Florida sunset, to do menial parish work due to my humble obedience to my bishop crap that they originally let Euteneuer (who was already under investigation) get away with. Still, their now seemingly tough talk comes with a "marvelous" (HLI chaplain Frank Pappa called Euteneuer "very gifted....a marvelous man to work for" when he left) lack of responsibility. To declare that his "highly inappropriate and gravely sinful conduct...was never within the scope of his employment with HLI" is all well and good, but it's just like saying since the Catholic Church doesn't approve of rogue priests raping altar boys, it shouldn't have to pay for the boys' or men's (they are often older by the time they can talk about it) physical or psychological treatment either. From what I've gathered, Catholic pro-life organizations aren't supposed to let their priests personally hire women who they are currently performing exorcisms on, especially when the priest is constantly taking the employee alone behind closed doors and then locking the door behind them. Someone at HLI must have been in charge of Euteneuer (not to mention his unconventional hiring practices) but if they all keep claiming he answered to no one and maintain their innocence (or ignorance) that's all the more reason to find the organization negligent.

Doe's suit against the other defendant, the Catholic Diocese of Arlington, seems on the surface a little more problematic. After all, Euteneuer's "home" diocese, that of Palm Springs, Florida, fairly quickly saw the writing on the wall and not only recalled Euteneuer (and eventually stripped him of his priestly faculties) but settled out of court with Doe for a relatively paltry sum before she had the time or temperament to consider her other legal options. Meanwhile, Arlington, like HLI, claim they cannot be held accountable for Euteneuer's actions since he was not officially a priest of their diocese. But to maintain you have absolutely no responsibility for an international Catholic pro-life organization within your diocese (not to mention a world-renown priest who, despite his original affiliation, has worked within your borders for a decade) is like the Diocese of Ft. Wayne-South Bend saying it bears no responsibility for the University of Notre Dame, or any Holy Cross priest-professor who comes to teach at Notre Dame from another part of the country. In addition, the Arlington Diocese does admit to subjecting the victim to a series of psychological and physical tests after Euteneuer left to determine if she was (still) a legitimate candidate for exorcism services (she was) and this seems tantamount to admitting that at least some of Doe's problems occurred while on their watch.

Which brings us back to the Jenn Giroux dilemma. While I have no doubt Jenn is a sincere pro-life activist (if not an impartial judge; her job at HLI, much like that of the victim, was obtained largely through Euteneuer's influence) she, like many of the women Euteneuer got close to, refuse to see the case for what it is: a spiritual caretaker ruthlessly abusing someone entrusted to his care. She calls her continued trust and confidence in the "fearless and uncompromising" Euteneuer "controversial," but in reality her attempt to discredit the testimony of the victim is the same tried (if not true) strategy that Jerry Sandusky's lawyer (and just about every abuser's lawyer) used (unsuccessfully) to get his sick client free. Of course, few but the blindest members of Euteneuer's army would agree with Giroux's assessment that Euteneuer's abuse apology, in which he derided the bloggers who broke his scandal as "sinful...crackpots" was "the model of true humility and repentance," but many seem willing to accept Euteneuer's testimony (contrary to what Doe says) that there was really only one victim. Here's two huge reasons why I do not.

First, although "Jane" was the only woman who asked me to write her story (albeit without her name) there were several others who, after reading my blogs on Jane, contacted me and told me similar tales of how Euteneuer also abused them while they were under his care. Due to the fact these women had caring family close by (and thus Euteneuer was not as successful in getting them alone, although not from lack of trying) Jane's sexual abuse by Euteneuer was (to my knowledge) the worst, but the psychological damage he inflicted on them should not be underestimated. Certainly, the opposition will claim that their anonymity is proof that their stories cannot be trusted, but both the similarity and the different details of their claims (plus the fact they felt they had to tell me) make their stories hard to dismiss. To me, their refusal to go public is more due to the fact they fear for their jobs and family, not to mention the wrath of pro-life big shots like Giroux, or even Euteneuer himself. To me the latter cannot be underestimated: while Euteneuer is allegedly back in Florida under the watch of the Palm Beach Diocese, a friend of Doe's told me an acquaintance recently spotted Fr. Tom lurking around Arlington again. Maybe I've read too many Fr. Dowling mysteries, but in a case where it appears everybody and nobody is in charge of Euteneuer's care and whereabouts, even if this was just another Elvis sighting, if I was a victim I wouldn't want to take that chance and give him a (further) reason to come after me. Being a crackpot blogger Father is mad at is bad enough...

Which brings me to the other reason I trust the "victims'" stories over Euteneuer's; the conversation I had with Euteneuer himself. When another Catholic blogger close to Father Euteneuer told him I was about to spill at least some of the beans concerning his exorcism sex-capades, Father e-mailed me and asked if we could discuss the situation first. I agreed to call him, and when he saw awe or his legendary charm alone was not enough to convince me to can the story, he quickly switched his tactics. He claimed the story (even if true) would damage the victims, but when I replied the victim felt it was important to healing to no longer remain silent, he reversed fields and said the publicity would hurt his parents, and later reasoned it would cause scandal within the Church. Finally, when Father began to beg me to remain mum, I started to get the feeling he was mostly concerned with saving his own butt, but just to be sure I played devil's advocate and asked him if he believed there were ever any circumstances that justified a victim's story being made public.

"But what about in the case of the Legion of Christ?" I was trying to think of their defrocked founder's name, but in the end Euteneuer supplied it for me.

"Are YOU comparing ME to Marcial Maciel?!#" Euteneuer was instantly and utterly enraged, so much so that I was glad I was speaking with him over the phone and not in person. Eventually he calmed down, gave me his priestly blessing (something I surely did not solicit, and, under the circumstances felt pretty creepy receiving) and signed off. Indeed, although it was not my intent to compare him to Maciel (after all, Marcial was an equal opportunity molester, abusing women, young boys and seminarians, while Tom stuck with the ladies), Euteneuer's reaction showed me that he too would do anything to not be outed, and therefore I must do the little I could to see that he was.

Chances are HLI and Arlington will see the light and settle out of court. But if the case is brought to trial and Euteneuer is called to testify, I hope the last quote I began this story with is the one they question him with first. Actually, since Euteneuer's eerie Jesus is not stopping me comment — which echoes all the way back to the Crucifixion — ("Save yourself! If you are the Son of God, come down from that Cross!" -Mt 27:40) would be his word against hers, the attorney should ask both Father Tom and victim Jane about it, hopefully with Jenn Giroux in the first row looking on. For something tells me that their reactions to this single damning statement will do much to ascertain who is telling the truth. And while it still may not convince Jenn to believe anything Jane says, I have the feeling if she looks Father in the eye while he testifies, Ms. Giroux will no longer believe everything Euteneuer says either.