Tom O'Toole
Obama and The Hobbit: a Middle-earth view of the fiscal cliff and the moral pit

January 1, 2013
After watching The Hobbit (Pt. I!) over the weekend, and concluding from the 119 previews (only a slight exaggeration) that preceded it, that Peter Jackson's faithful-if-overlong tribute to Tolkien's Lord of the Rings prequel was perhaps the only movie of this year or next that represented the classic Judeo-Christian view of good vs. evil, I decided to write the tale of our times in the form of another Middle-earth parable. The good — or bad — thing about O'Toole's modern tale is that it does not yet have an ending. 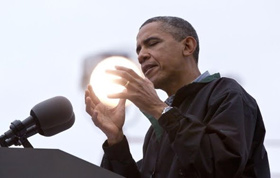 Into a once-great country that was slowly trading its passion for virtue for vainglory, strode a young smiling wizard that no one outside of Crimeville (formerly known as "Chicago") had ever heard of. He was of a different color than most wizards, and his style and smile so mesmerized the media-fed masses that they thought his message of changing hope, or hoped for change (I can't remember which), was a heavenly revelation rather than a campaign slogan. The Dark Wizard was elected in a landslide, but gradually, a few of the land's youth (those few who could still see) saw the evil behind his eyes and the lies beneath his smile, and they joined with the old men who still dreamed, in an attempt to defeat him.

The time for the next election came, and along with the usual suspects who sought to defeat the Dark Wizard, emerged a poor-but-honest peasant who long ago had governed but whom many had given up for dead. In a land of few babies, he amazed the media with his many children, and although he sometimes stumbled when he spoke, and would frequently brandish his sword when a prayer would do, the lowly saw that his words were true and his heart was pure, and began to follow him.

Meanwhile, the established candidate of the Old Grand Party, a man whose smile could sell used cars but whose money could buy a thousand used car lots, also witnessed the poor man's success, and realized he must quickly change his strategy. "The peasant is much more virtuous than me, and I could never defeat him by being good. Instead, I must switch and beat him by becoming evil." And, true to his false word, the Salesman poured all his money into televised lies and published half-truths about the poor man, and since the Dark Wizard had already convinced many of the land's people that a word spoken enough times must be true, many came to believe the Salesman, and without the money or ammunition to counter the lies, the peasant was defeated.

But then came the general election, and the quick-changing Salesman realized he must change yet again. "The Dark Wizard is far more evil than I could ever be, and I could never defeat him by being bad. Instead, I will switch back, and beat him by becoming good again." While the Salesman was correct in accessing that he was not as evil as the Dark Wizard (for the land had never seen the equal of his evil before) he found virtue was not something easy to switch back to, and he wasn't so good at being good.

For example, he first promised to repeal the practice of human sacrifices that the activist judge had instituted and the Dark Wizard had expanded, but his exceptions to the rule; that the sacrifice was okay if the human was taped or had lost interest, left the good confused and the evil uninspired. The Dark Wizard dumped even more money into the media than even the Salesman would, and told even worse lies about his opponent than the Salesman ever could, and by his own (if previous) strategy, the Salesman was defeated.

And so, as the Dark Wizard, emboldened by his reelection, plots to take the country even deeper into a godless, government socialism that has become the modern form of slavery, a few still have the courage to ask me the moral of this yet unfinished tale. While I would suggest that message should be that evil can never be defeated by mediocrity, let alone lukewarmness (see Revelation 3:16), most talking heads still disagree with me, so I'll let the reader decide. 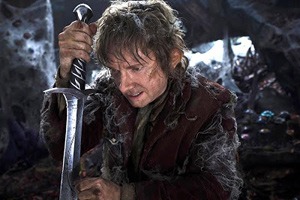 But with one slim section of government still holding on for dear life to being pro-life, I believe this country still has maybe one more chance. As Gandalf raised up a tiny hobbit from the Shire to save the kingdom, I pray God raises up the little governor from Louisiana to save the nation. Until then, all of us, the little people of this once God-fearing land, better pray for the courage to resist the Dark Wizard's beautiful lies and stand up, always and everywhere, for the only Truth that can defeat them.