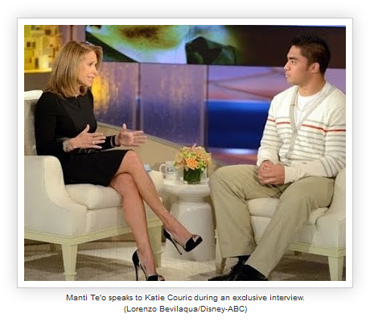 A day before the much ballyhooed Katie Couric-Manti Te'o "tell all" interview, I was flipping through the channels and caught a couple of foolhardy "Extra" hosts on NBC (ironically, Notre Dame football's home station) comparing Manti Te'o's would-be romantic tale to Lance Armstrong's decade of doping-and-denying saga. Recognizing the male to be Mario Lopez, formerly of Saved by the Bell, once one of my daughter's favorite "teen" comedies, I pondered how many stars from that goofy kids' comedy were now into either verbal or actual pornography, and wondered if the so-called serious journalist Couric would compare the spec in Manti's eye to the log in Lance's as well.

As it turned out, Couric didn't go quite that far in her verbal tussle with Te'o, but there was enough soap opera sleaze and emotional tease to please the Hollywood crowd. I mean, even Oprah didn't have the gall to ask Lance Armstrong if he was gay – a Te'o denial, by the way, that even Katie readily accepted. But if Couric's questioning seemed more aimed at delivering tears and jeers (from both the audience and Manti's parents) than the truth, there was one line of questioning that still proves useful in a rational (and rationalizing) analysis.

If nothing else, the Couric-Te'o interview showed how a lie, even a seemingly small and insignificant one, often takes on a life of its own until it snowballs out of control. What started as Manti's little "love lie"; telling his dad he met Kekua when in fact the relationship was totally over the Internet and phone, turned into Te'o telling reporters that he had met her (so as not to contradict his dad's story to the press, to telling a national TV Heisman audience that Kekua was still "dead" after finding out she was either alive, or perhaps a hoax (as it later turned out) two days prior.

Note that the usually honest Te'o at first denied lying to Katie, then sort of justified it by detailing how complicated the situation had become, a situation that ironically never would have happened if he had listened to his father's advice to not continue this questionable relationship until he met this mystery woman face to face. I'm not sure if Mormonism allows lying in such complicated situations, as certain liberal Christian denominations seem to (and Romney's presidential run seemed to imply), but when Te'o asked Katie what she would have done in that spot, it was indeed a red flag. Because to the Christian, the question is never WWKD but WWJD, and despite our different views on Christ's role as Savior, I was disappointed that in tight spots, he sought to be judged by the moral standards of KC rather than JC.

In the end, Notre Dame needed both an All-American and a saint to lead it out of its theological and football drought, and it is difficult enough to find a Catholic who aspires to sainthood let alone a Mormon. Manti, despite his minor flaws, remains a good player with a big heart, but I think deep down he realized that Notre Dame cannot win the national championship with a hoax, for the song does NOT say "What though the LIE be great or small, ol' Notre Dame will win over all," but something quite the opposite. To be successful, Notre Dame football, like Notre Dame, must always be about the Truth. Which brings us back to the story of Lizzy Seeberg.

If I understand him correctly, Tom Seeberg is not bringing his daughter's story back into the news for any type of compensation or revenge, but only to discover the truth. Which is why I find it so curious that he is going to the secular press with his concerns; for although CNN and the New York Times may not be as slanted as ABC/Couric, I doubt he will be too happy with their presentation either. For if Notre Dame makes themselves look more righteous than they are, the MSM portrays Notre Dame (and the Catholic Church) 180 degrees to the left; almost totally devoid of the good.

Perhaps Tom still hopes this publicity will bring a confession from the player (if only Lizzy had dated Manti, my wife sighs, they both would have been happy!) or an apology from Fr. Jenkins. But barring conversion, he knows they are both beholden to silence by their lawyers, especially Jenkins, who after looking like a fool in his explanation for inviting Obama, is not going to make an ass out of himself with some half-baked mea culpa concerning the Seebergs. 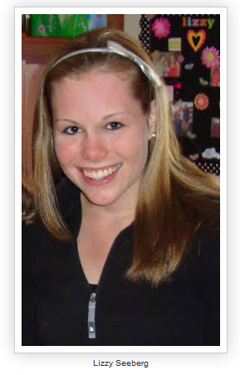 I personally left Tom after our last interview eighteen months ago feeling that since Notre Dame won't uncover the truth concerning his daughter, he wouldn't mind if I did – as long as I don't involve him. But since I barely make ends meet with my writing, I have neither the time to bug the Notre Dame brass for answers, nor the money to hire a private investigator, whereas Seeberg at least has the resources for the latter. On the other hand, Tom's personally tackling Notre Dame could result in the loss of his livelihood, and after already losing his daughter to Notre Dame, that might be too much for his family to bear.

But there may be a simpler explanation for Tom's recent press appearances, based on a restlessness of Lizzy herself. Maybe Lizzy is nearing the end of her time in purgatory, and his daughter being more on his mind than usual, is really her way of asking for prayers to be released into heaven. Although Tom liked my idea for a statue of Lizzy to be placed in a spot the players would pass on the way to the stadium, to make them ponder a pure approach to the game and their girls, in the meantime we could all put a picture of Lizzy near the TV when the Irish play, so as to remember to pray for her release – and vindication. It might not hurt to mail a picture of Lizzy to a random Irish player either. Eventually, her image would find itself to the right man, and this time heaven itself may play a role in getting his soul to do the right thing.