Victor Sharpe
Obama and the art of hollow words

March 8, 2012
At his press conference, pushed through deliberately on the very same day of the Republican's Super Tuesday event, President Obama chose to not only to dilute the media coverage of the Republican candidates' presidential ambitions but to essentially reverse his pro-Israel AIPAC speech of the day before. In short, the President's words rang hollow regarding his alleged support for embattled Israel.

Worse, he essentially went back on his AIPAC speech in which he had again bamboozled many in the audience into believing he was the most supportive U.S. president of the Jewish state in history.

Tragically, far too many Jewish Americans still remain tied by some mystical umbilical cord to the Democrat Party and, most baffling of all, still support this most anti-Israel U.S. president in history.

At his AIPAC speech, Obama boasted about what he has done for Israel. But he conveniently hid the fact that it was not what he has done, but what Congress has done. This president always takes credit for what others have achieved.

"Here is a president who fought tooth-and-nail against the very sanctions on Iran for which he now seeks to reap political credit."

And let us remember also that Obama inherited from the Bush administration the security assistance to Israel which he, Obama, now advertises as proof of his "unprecedented" commitment to the Jewish state.

From the very beginning of his administration, President Obama has not supported Israel. Instead soon after taking office he pressured Israel into agreeing to make endless concessions to the Arabs who call themselves Palestinians, including a complete freeze on building housing for young families in Jerusalem and Judea and Samaria (the so-called West Bank). He did this without once requiring the Arabs to reciprocate with concessions of their own.

In May, 2011, Obama threw Israel under the bus with a demand that Israel agree to return to the suicidal pre-1967 armistice lines, leaving Israel only 9 miles wide, as the basis for a peace agreement with the same Arabs.

This demonstrated utter disregard and contempt for Israel's legitimate security needs. Even a number of leading Democrats, including Sen. Harry Reid and Rep. Steny Hoyer, felt compelled enough to speak out in response to Obama's outrageous proposal for Israel to return to the indefensible pre-June 1967 armistice lines.

Obama, since coming into office three years ago, has allowed Iran to spin its dread centrifuges in the deluded belief that Iran's mullahs are rational and can be reasoned with.

Even the German socialist weekly Die Welt just reported that two years ago Iran conducted an explosive nuclear test in North Korea, based on a Swedish report of airborne radioactive particles detected in 2010. This may or may not be true but North Korea and Iran are twin rogue states.

And recently the United Nations' inspectors have been rebuffed again by the mullahs, after trying to inspect another advanced Iranian nuclear weapons production facility.

Obama had the chance, some two years ago, to express America's strong public support for the millions of Iranians in the streets protesting the fraudulent re-election of President Mahmoud Ahmadinejad. Instead, the president did nothing. Since then Iran has moved ever closer to achieving nuclear weapons and many, perhaps thousands of protestors have disappeared into the mullahs' dungeons.

Prime Minister Netanyahu should not speculate on whether Obama really does have Israel's back, as the U.S. president repeatedly claims.

Instead, the Israeli prime minister has to accept the strong possibility that this administration will not assist Israel against Iran attaining nuclear weapons; indeed it may even come — perish the thought — to President Obama ordering the U.S. military to actively prevent an Israeli military strike on Iran's nuclear weapons facilities and missile silos.

Iran may well be encouraged and emboldened by Obama's attitude toward Israel, seeing it as evidence that the U.S. will not defend Israel if it is attacked.

This may well make the advent of war in the Middle East more likely than less. Let us remember, also, that Iran's proxies, Hezbollah and Hamas, have perhaps 100,000 missiles between them pointed at Israeli cities, towns and villages. And they are lusting to fire them.

There are some, however, such as Walid Shoebat's organization, who believe that Iran will get the bomb and that Saudi Arabia will be the first victim of an Iranian nuclear strike.

Iran's leaders believe in the coming of the 12th Imam, and that it is their duty to accelerate this Imam's arrival by first destroying the Little Satan and then the Big Satan — Israel and the United States respectively.

It is impossible to reason with Islamic fanatics and followers of doomsday cults. The nightmare is that the present incumbent of the White House, and those he surrounds himself with, still think they can.

In an eerie way, the events that threatened the survival of the Jewish people in Persia 2,500 year ago, and are commemorated in the Jewish festival of Purim, are being repeated today by an existential threat to the reconstituted Jewish state. And that threat comes from the same land of Persia-Iran. It is instructive to read below the words uttered by Prime Minister Binyamin Netanyahu at the recent AIPAC conference. 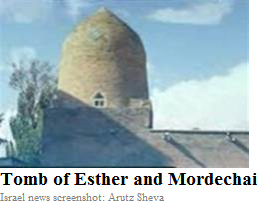