It seems like Christians have become so accustomed to despair, disappointments and suffering in the world that we often ask Jesus only for that which we think is reasonable. Why? Later, in Matthew 17 Jesus tells us, "If ye have faith as a grain of mustard seed, ye shall say unto this mountain, 'Remove hence to yonder place; and it shall remove, and nothing shall be impossible unto you."

Perhaps we've become so accustomed to prayers not being answered in the way we expect, that we stop praying the big, grandiose prayers. I often think when we pray small prayers we are showing a lack of faith in what God can do. Certainly it's worth considering that a life spent praying grandiose prayers that were not answered (in the way we wanted), may leave us not only disappointed, but depleted of faith. It's also worth considering that in God's giant scheme of things, those big prayers at least demonstrated the faith that he required; the faith he instructed us to have. It is my belief that while most of us have not witnessed mountain-moving miracles, there are things our prayers have accomplished that we will never know this side of heaven.

These are the kinds of big prayers we should be launching heavenward as we come to grips with the fact that our country is fighting for its life in an ideological civil war. One cannot hear the constant lies from this administration – and worse yet the cult-like hate of biblical morality from half of our citizenry – and not realize that something historic and frightening is happening. Something so large that its scope makes the brother-against-brother arguments of the Civil War pale in comparison. The issues over which we spar now are just as pivotal for the nation's future; and millions more American lives hang in the balance. Let it not be said now, as the poet Yeats said that, "The best lack all conviction, while the worst are full of passionate intensity."

We may not be dying en masse by bayonet or rifles; but we are decaying slowly as victims of bad laws, bad medicine, drug shortages, corruption at the highest levels, government intimidation, anarchistic violence, inflation, neglect, judicial injustice, and depression and suicides. And while we may not be literally buying and selling each other, we are just as surely being sold out by the task masters of a tyrannical government.

We are again fighting to preserve the Republic, yet due to decreasing morality and increasing evil, the fight is perhaps the greatest we've ever faced. There is no doubt that unseen forces – legions of angels and demons, principalities and powers, are clashing loudly in that unseen and unheard world that envelops us. Sometimes in silence and often in chaos, they are even perceptible.

Some Christians dismissive of politics say: "We should put our trust in God, not man." Yet this counteracts detailed Biblical lessons that teach the importance of discerning between a good leader or bad leader – and how a people should respond to each. Have we forgotten that those whom the people entrust with power can either lead them out of bondage or feed them to the lions? Do we remember that it is the laws of a country that decide a man's freedom, or his crucifixion? 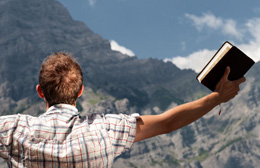 God blessed this country because its laws were founded on the basic premise that we were endowed by Him with certain unalienable rights. Everything cultivated and harvested beyond that was a result of that acknowledgment.

While polls show that many people believe we are living in the end times, one has to wonder why they don't act like it?

I recently saw a man in a business suit standing on the lawn across from the post office, reading the Bible loudly and telling anyone who would listen that judgment was coming to America. I smiled at his boldness. He was eventually hustled away by police as onlookers scoffed at him. I couldn't help but think, "At least he answered when God said "Shout!" I was proud yet disappointed to be the only one yelling "Amen!"

There is a time to offer God quiet reverence and whispered heartfelt prayers, and a time for shouting God's truths and answering his call to action...despite reluctance or personal inhibitions. It is time to come out of the belly of the fish and go to Nineveh with the newfound resolve of Jonah.

How shall we start? Whether one believes we are living in the end times or not, our stay here is brief and opportunities to make a difference are given to each of us. While considering the dangers of approaching strangers, giving up our anonymity or publicly voicing our opinions, it's time to make hay while the sun shines. The time is not yet come to withdraw to a secret cave, but rather to publicly defend our faith and our constitutional liberties from those trying to destroy them. Why millions of outraged Americans have not yet been successful in demanding articles of impeachment on our current President is a staggering conundrum to me.

With prayerful strength we should stand behind those dwindling few in public office, both nationally and locally, who support Judeo-Christian values and constitutional precepts. It's time to leave our comfort zones as we remember that Christians and freedom fighters in other countries are regularly being killed for their beliefs. How small our efforts seem in comparison, even as we shrink from sticking our necks out.

Each of us must decide in our own soul what our calling is in these perilous times, but one thing is certain: The time for business as usual is over. We need drastic, bold, life-changing prayers and action to save this country. As cathartic as they are – tweets, internet comments and Facebook posts are a waste of time unless they lead to real change. Taking two minutes out of our day to lambast the president on Twitter doesn't seem to be translating into a game plan. With each action we take, each contact we make, we should be trying to actually accomplish something.

It's time to "break the glass in case of emergency." Let's break out the big, giant, audacious prayers – not only for our country, but in our personal lives as well. Nowhere in the Bible does God tell us to keep our prayers "within reason." God wants the big stuff. He wants us to pray huge prayers that are beyond our reason or grasp...because nothing is beyond His.

Susan D. Harris holds a degree in Telecommunications  Radio and Television Broadcasting, with a minor in Journalism. She formerly worked as a newspaper reporter and has written for various newspapers and magazines. Additionally, she studied theater on scholarship in Londons West End, the National Theater, and Swan Theatre, Stratford-upon-Avon. She can be reached at http://susandharris.com/

April 16, 2018
How the gods of globalism slit the throat of assimilation

April 3, 2018
The tumultuous effect of the LGBT agenda on one young mind

February 26, 2018
On finding warnings for America from Rev. Billy Graham

January 13, 2018
Groomed for paradise or WWIII? The race for the Red Sea

August 21, 2017
Itching for a fight: America under siege before Charlottesville

August 17, 2017
Sabotage and destruction: from my house to the White House

April 6, 2017
Three who kept the communists at bay in popular culture