May 21, 2019
The folks celebrating the passage of Alabama's HB 314 ("The Alabama Human Life Protection Act") seem not to have read the bill. Although every news outlet under the sun touted HB 314 as "the nation's most restrictive" anti-abortion law, an examination reveals nothing of the sort. Everyone says we are looking at pro-life clothes, but Alabama is parading naked. HB 314 is just another substanceless pro-life fraud.

To start with, Gov. Kay Ivey said at the outset that she will not enforce the so-called ban. In deference to a judicial supremacy that conveniently lets every politician off the hook, Gov. Ivey said "we must always respect the authority of the U.S. Supreme Court," and therefore allow the wanton murder of prenatal infants. Wherever she got that idea, it wasn't from the U.S. Constitution, which requires equal protection for the right to life of every person, and enacts independent branches bound to that requirement. In our system, the judiciary is "next to nothing," to quote Alexander Hamilton's footnote in Federalist 78, and its opinions are limited to cases before them and always subject to rejection from the other branches.

But even if Gov. Ivey overcame her judicial supremacist delusion, the new Alabama law would not stop a single abortion. Despite being labeled a near-total ban, with only a "life of the mother" exception, the act carries multiple exceptions, all of which do not restrict abortion in any meaningful way.

Most egregious is the "mental illness" exception. Not long ago, every person exposed to politics understood that a "mental health" exception would allow all abortion. In Alabama's act, we find the classic representation of this gaping loophole, in which the doctor is authorized to kill the baby if the mother might "engage in conduct" that harms herself or her child. (What logic!)

Forget all the hype about no rape/incest exceptions – those conditions are included, along with every other possible kill-the-baby scenario, by this "mental illness" provision. Thus, Alabama has sold EVERY SINGLE baby down the river.

But let's go back in time and scrub the "mental illness" provision from HB 314: the bill remains immoral, unconstitutional, and pro-death. Alabama sells the babies out more than once.

We find in Alabama's act the usual trap laid by its "pro-life" predecessors. Almost invariably across the country, "pro-life" legislation has portrayed doctors as angels and expectant mothers as victims, regardless of murderous intent. Thus, every heartbeat bill, every fetal pain law, every born alive infant act, every partial birth abortion ban lets the woman escape penalty and lets the doctor off the hook by the trust placed upon his word, without due process of law. Even though God-endowed human life demands the highest level of protection, as expressed by every constitution and code in the nation, the Alabama act allows the doctor to destroy life and kill any baby that he claims had a "lethal anomaly." Who are these babies? Well, they are children like Noah Wall, the boy born without a brain. Instead of giving life a chance, and fulfilling the constitutional requirement to protect every person, the State by this provision encourages and authorizes the doctor to be an angel of death. Given his own humanity, and his requisite susceptibility to temptation, the doctor is highly likely to exploit the State-authorized, unchecked power and destroy any child he wishes, on any basis. No one would know if the doctor lied about who he killed. But even if he was honest, and killed only the disabled babies like Noah Wall, what justice lies in that? How is that defensible or lawful? So we find in this Alabama provision a mockery of law and justice: a violation of the Constitution's requirement for equal protection.

Finally, the Alabama act adds one more exploitable and immoral provision: the exception for the life of the mother. "Life of the mother" exceptions are looked upon with favor in the pro-life community, but these tend to unnecessarily threaten the child's life. The door gets flung open when you write a law that expressly enables a doctor to intentionally target a child for death. Now, in the process of saving the mother, the doctor's actions may cause the inadvertent death of a child whose mother is severely injured or sick. However, the doctor's duty is to proactively try to save all lives at stake. Yet we see the Alabama act blithely prescribe the intentional termination of the child in this scenario, as though he is not equal. The Alabama act expressly bestows upon the doctor unrestrained authority to act "with the intent to terminate the pregnancy" for the mother's sake. It was such an exception in old state laws that provided rationale for Roe v. Wade. Do pro-lifers forget that Justice Harry Blackmun said the following in Roe? "When Texas urges that a fetus is entitled to Fourteenth Amendment protection as a person, it faces a dilemma. Neither in Texas nor in any other State are all abortions prohibited. Despite broad proscription, an exception always exists. The exception contained in Art. 1196, for an abortion procured or attempted by medical advice for the purpose of saving the life of the mother, is typical. But if the fetus is a person who is not to be deprived of life without due process of law, and if the mother's condition is the sole determinant, does not the Texas exception appear to be out of line with the Amendment's command?" (Footnote 54, Roe v. Wade, 1973)

To end abortion, we cannot treat the child as the property of the mother, but as her dependent child and equal. Any mother or doctor who targets that child for destruction deserves the highest punishment in the land for seeking to commit the highest crime against humanity: the destruction of innocent human life.

In addition to all of the above, the Alabama act has a glaring oversight. It does nothing to stop Plan B, the preferred weapon of choice against the unborn child, and arguably the cause of most abortions in this day and age. By leaving Plan B on the shelf, you are telling women and girls their baby isn't really a baby. You are enabling the destruction of incalculable millions of persons made in the image of God, just because they are small and easy to destroy.

With its hypocrisy exposed, the Alabama Human Life Protection Act gets an "F" for failing to protect the little children. 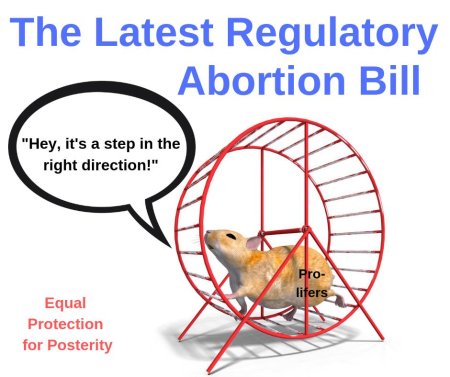 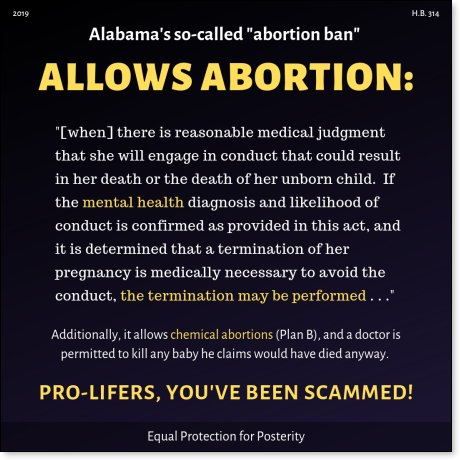