August 25, 2009
According to Mexico's largest newspaper El Universal a Guerrero state senator was assassinated. State Senator Armando Chavarria Barrera, leader of the Congress of the state of Guerrero, was assassinated by gunmen in front of his home yesterday morning. The Senator was one of the most renowned and respected politicians in the left-wing PRD party and considered a natural candidate for governor in the 2011 elections. The two trigger-men and a driver who escaped in an SUV are believed hired assassins for the Mexican Drug Cartel La Familia. The motive for the assassination is believed political and norco related. Mexican Drug Cartels are getting more and more involved in not only statewide politics but also national. The cartels have been threatening to take out any opposition by whatever means necessary. The PRD immediately condemned it as political. 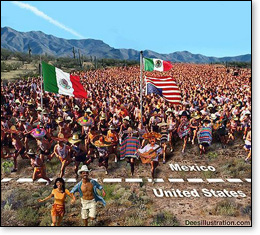 However in the aftermath of the assassination of Sen. Barrera some party leaders disagreed on the motive behind the murder. The Chief of Government of the Federal District, Marcelo Ebrard, is certain the crime was political, while the Governor of Guerrero, Zeferino Torreblanca Gallindo, rejects speculation of political reasons. He said it is yet too early to begin asserting such motives

Mexican President Felipe Calderon extended his condolences to the family and promised full support of the Federal Justice Department (PRG) in the investigation.

Gunfights continue in the south, narco unrest continues in the southern states of Mexico. A battle between the police of Huimanguillo, Tabasco, and armed thugs broke out on the bridge that separates the states of Chiapas and Tabasco. Preliminary reports are that two police were killed. The present violence is believed related to the killing of a narcotrafficker by Los Zetas.

In the trenches of both sides of the narco war in Mexico the fighters who form the front lines in that war are not only Mexican military but also para-military of the Mexican Drug Cartels They have become the expendable contingents that have already cost the lives of over 4,000 in the country so far in 2009. The real face of the war that the military and the cartels are waging has one main characteristic: youths who average 20 years of age. The only thing that marks the difference between the soldiers and the cartel mercenaries is the uniforms they carry mainly the same weaponry. In a tour El Universal made with military forces through the battle areas of Michoacan, their first impression was not the arms and equipment of the warring parties, but the age of the soldiers who several months ago were minors and are now on the front lines. Federal operations have also revealed through arrests of the cartels' warriors that they also average 20 years of age and youth on both sides are recruited from small villages in the interior.

More Mexican solders ambush in Juarez by well Armed paramilitary. The ambushed was a Mexican Army patrol in Ciudad Juarez, Chihuahua, just across the border from El Paso Texas. The attackers killed one Mexican Army Soldier and wounded two others. The para-military unit escaped. This is the second deadly attack against soldiers in the past two days. Direct confrontations between the Mexican soldiers and the Mexican Drug Cartel's para-military personal is dramatically increasing throughout the country

In response to a major increase in death and violence in the Mexican President's home state of Michoacán President Felipe Calderon sent more than 5,500 additional troops and federal police to protect, defend and support federal forces already there and other Mexican law enforcement personal who have taken a stand against the Mexican Drug Cartel known as La Familia.

Meanwhile more police executions in Michoacan even after military re-enforcements arrived. The bodies of two more police officers in the state of Michoacan have been found blindfolded and murdered by shots to the head near the town of Sahuayo. The two, 45 and 46 years olds, were abducted at the end of their shift by an armed para-military force. Next to the bodies was a "narco-message" that was not released by the authorities. The photo depicts the two dead officers.

The Mexican Revolution has begun By Michael Webster