An unacknowledged war: U.S. troops, the FARC-EP, Chavez, and an error repeated

August 27, 2009
The United States is at war in Latin America  or more properly  nations and guerrilla armies are at war with the United States. Although under attack, and our citizens have been 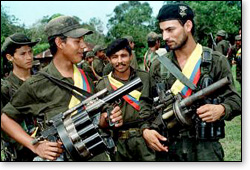 killed, there has been no acknowledgement by the U.S. government or media that this nation is involved in a full-scale war. America has already lost lives in this war, and now the U.S. government seems set to again commit an error which led to the deaths of hundreds, possibly thousands, of Americans in Vietnam.

After the pro-Marxist government of Rafael Correa government expelled the U.S. from its base in Manta, Ecuador, the administration of U.S. President Barack Obama committed the U.S. military to operate out of at

least seven Colombian military bases. Manta was an important center for the U.S. campaign against the illegal drug trade in the region.

While the intent is to replace the anti-drug facility at Manta, the Obama administration has committed U.S. military personnel to an anti-drug campaign within a nation which is fighting an ongoing 40-year civil war. American advisors have assisted the Colombian military for years, but the projected increase of U.S. personnel raises the possibility of larger scale engagements between American and enemy combatants.

Unfortunately for U.S. troops, the enemy are not merely for profit drug traffickers, but are ideologically committed revolutionaries attempting to overthrow the Colombian government.

The link between drug trafficking and revolutionary ideology is seldom, if ever, mentioned in the Centralized Media.

In addition to the perilous situation U.S. troops will be facing in the struggle with the Colombian drug traffickers/revolutionaries, the Obama administration is placing political restrictions on how the military is to conduct its operations. 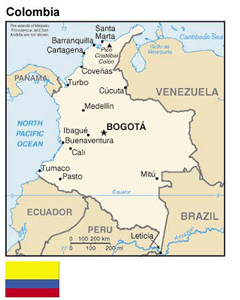 According to a recent Spanish language report, the U.S. ambassador to Colombia, William Brownfield, stated that U.S. forces will not approach or cross any border into any of Colombia's neighbors without a prior bilateral agreement.

As a result of this policy, U.S. military personnel may be in hot pursuit of a narco-terror gang, but once the enemy approaches the border of one of Colombia's neighbors, the Americans will be forced to break off the chase.

Brownfield's declaration was meant to counter charges from several Latin American nations that the U.S. will use Colombia as a base for military expansion in the region, but it will also cost American lives.

A similar restriction during the Vietnam war frustrated attempts by the U.S. military to eliminate guerrilla formations operating in border regions. The result was unnecessary casualties and a lowering of troop morale.

U.S. restrictions on military personnel will probably have a similar result in Colombia, because cross border raids and counter-raids have been an essential factor in the recent history of Colombia and its neighbors, and the pattern is very likely to continue.

In Colombia, the largest guerrilla force  and the one involved in drug trafficking  is known by the initials FARC-EP, the Spanish initials for the Revolutionary Armed Forces of Colombia  Popular Army, usually abbreviated simply as FARC.

The FARC controls most of the drug trade in Colombia, and the profits fund the FARC's war against the government of Colombia. The FARC also acquires money through kidnapping and extortion.

While the FARC methods of funding their activities are criminal, and the rebel group itself is sometimes dismissed as simply an outlaw organization, the FARC energetically espouses Marxist ideology. 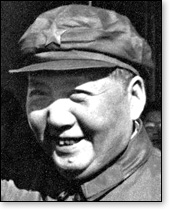 A LINK BETWEEN DRUGS AND MARXIST REVOLUTION

The sale of illegal drugs is a time-honored method of raising money for Communist guerrilla groups. Over seventy years ago Chinese Communist leader Mao Zedong needed a source of income to replace aid from the Soviet Union, which dried up during the early days of WWII.

Mao chose the illegal drug trade to keep money flowing to his revolution. The FARC is following Mao's example, as is the Shining Path (Spanish, Sendero Luminoso) in Peru. The Shining Path is a much reduced Maoist revolutionary group from its high point in the 1990s, and has turned to the illicit drug trade to fund its remnant force, while offering generous cash inducements to join the revolution.

The FARC is allied or sympathetic with various Communist movements in the region, especially the "21st Century Socialism" of Hugo Chavez, the Marxist dictator-president of Venezuela. Although he publically asked the FARC to lay down its arms in 2008, Chavez continues to provided assistance and asylum for FARC guerrillas, as he has done since becoming Venezuelan president in 1999.

In 2004, Chavez's proclaimed neutrality in the Colombian civil war received a rude shock when the FARC's reputed "Foreign Minister," Rodrigo Granda was abducted by anti-FARC operatives in Venezuela's capital city, Caracas, and taken to Colombia.

Granda's imprisonment was relatively short, however, since he was exchanged for prisoners held by the FARC.

Chavez has been consistently connected with the FARC's drug trade, especially exports to Europe via Africa.

FARC guerrillas also have operated out of Ecuador. A high ranking FARC leader, known as Simon Trinidad, was captured in Ecuador in 2004, while a pro-American government was in power. 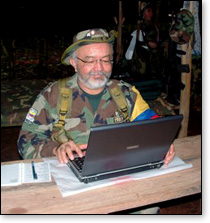 Slightly more than a year after the election of Rafael Correa, a pro-Chavez Marxist, Colombian forces, in March 2008, raided a FARC base about one mile into Ecuadorian territory. The FARC second-in-command, known as Raul Reyes, was killed, but far more importantly, Reyes' laptop computer, storage discs and travel drives were captured.

The information gained from the captured computer files, and verified by Interpol, the international police organization, indicated a wide net of FARC contacts across Latin America and Europe. The raid remains a sore point between Colombia and Ecuador.

Americans attempting to fight the drug trade in Colombia have already been tortured and killed by the FARC. One of the more widely known incidents involved four American contractors and their Colombian pilot. The five individuals were on an anti-drug surveillance flight over FARC controlled territory in February 2003, when their plane crashed. 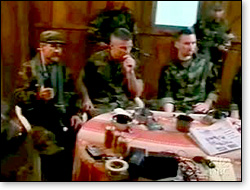 U.S. citizen Thomas John Janis and the plane's pilot, Colombian soldier Luis Alcides Cruz, were killed by FARC guerrillas, and the remaining three, Marc Gonsalves, Thomas Howes and Keith Stansell, were captured. They remained prisoners of the FARC for more than five years, until a daring ruse in July 2008 by Colombian forces freed the Americans, as well as one-time Colombian presidential candidate Ingrid Betancourt, and 11 others. The three Americans wrote a book about their experiences, Out of Captivity: Surviving 1,967 Days in the Colombian Jungle.

There may be a sense of closure to this particular incident. The hard-fighting military of Colombia recently captured a FARC guerrilla fighter, known as "Bronco," and identified him as the killer of Janis and Cruz.

Like most aspects involving the FARC and the Latin American Marxist war against the United States, the centralized media are giving little attention to the arrest of the apparent killer "Bronco," or to his comrades still in the field.

America's actions in Colombia must be well informed and clearly thought out. At this point, the American people have not been fully or accurately informed about the situation on the ground in Colombia, and American policy appears to be drifting toward another disaster born of confusion.

FIND OUT WHAT THE CENTRALIZED MEDIA IS NOT REPORTING  READ: Lies, Terror, and the Rise of the Neo-Communist Empire: Origins and Direction. Or, go to your favorite online book seller.