The strategy of "Peoples War" is destroying the United States

The disgraceful betrayal of America's armed forces which occurred during the war in Vietnam is being repeated again in Afghanistan. Today's military allergic White House and the current ready-for-flight Congress recalls the Congressional abandonment in the early 1970s of U.S. troops and allies in Vietnam. The concept employed then and now is that of a "Peoples War," a strategy which awards victory through media manipulation at the very moment enemy guerrilla forces are on the verge of complete defeat on the battlefield.

Lies, disinformation, and even a manipulated silence are used in concert to assure defeat in war although American forces have been successful in battle.

The pattern is as chilling as it is cynical, but it is not new. Communist guerrillas first used it in Vietnam.

During the Vietnam conflict, the centralized media rarely reported on communist atrocities, guerrillas were portrayed as freedom fighters, and the war itself was portrayed as hopeless. The result was an undeserved American defeat in a war U.S. troops were winning, a slaughter of those opposing the communists, and the destruction of American self-confidence in the military and at home.

U.S. veterans of that era are still haunted by the despicable way in which they were treated by many of the American civilians they had sworn to defend. "News" media and "activists" soiled the reputation of returning soldiers as indiscriminate killers.

Some of the "activists" of that time are now established in positions of power in media, government, or in politics. In turn, they are giving assistance to the current members of the "peace movement." "Peace" demonstrations regularly receive positive coverage in the centralized media, and important members in the House and Senate advocate the "peace" agenda shouted out in street demonstrations, from restriction of funding to evacuation of Afghanistan.

There are also reports that Vietnamese generals have shared their "Peoples War" expertise with Islamic "insurgents." We have covered this point in Lies, Terror, and the Rise of the Neo-Communist Empire: Origins and Direction.

The strategy is to dishearten the civilian "home front," which, in turn, spreads like a plague to the fighting troops. Objective victory thus turns to an emotional, subjective defeat.

The tactics used are as simple as they are effective. When American troops are victorious in battle, the victory is not reported, or characterized as another chapter in an endless conflict.

Today, the Peoples War strategy sometimes favors silence, because public attention is then diverted from the war. The troops are thus effectively isolated from the support they deserve and need. Reporting on the war emphasizes civilian casualties, the horrors of war, and/or the suffering of the solitary soldier. What and who we are fighting is lost. The opponent is redefined: the individuals attempting to kill U.S. troops are "insurgents," not the enemy. 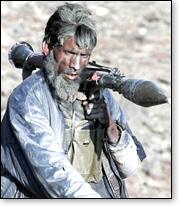 "Insurgents" are often identified with the civilian population. They are simply home town boys (and occasionally girls) who are fighting against occupying U.S. troops, not fanatics or ideologues who are as much a threat to their neighbors as to the American military.

This pattern holds across the liberal media.

The "insurgents" are well aware of the media campaign being waged in their favor. Because of the pro-terrorist slant of the centralized media, the "insurgents" benefit from victory or defeat.

If a mass assault forces a U.S. withdrawal, as recently happened in Afghanistan, then the enemy  that is to say, "insurgents"  are portrayed as an unstoppable force in a never ending struggle. When the enemy is defeated, then the bodies of "insurgents" are shown clothed in rags, laying in the dust, victims of the super-sophisticated American military machine.

Little or nothing is said about the atrocities perpetrated by the "insurgents," nor are the extraordinary humanitarian efforts of our troops discussed.

It's time to challenge the media and its role in the Peoples War. We cannot stop the "insurgents" from hiding among their own people and using their dead as propaganda pieces, but we can recognize when we are the targets of an outrageous campaign to destroy our will to defend ourselves and others against a sadistic enemy.

We must understand that we are not only dealing with bias, but with a concerted effort to misinform and misdirect the American people, directly and purposefully benefitting those attempting to destroy the United States.

It is time to challenge the lies, READ: Lies, Terror, and the Rise of the Neo-Communist Empire: Origins and Direction, order from www.inatoday.com or go to your favorite online book seller (locate by title).